Bulletproof Coffee (and the Spirit of Contemporary Capitalism) 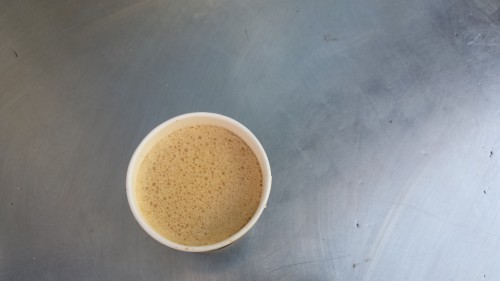 At a health food café in central London, I recently drank my first ‘Bulletproof Coffee,’  a surprisingly ingestible blend of espresso, butter and coconut oil which has a texture not dissimilar to yak butter tea. To be precise, Bulletproof® Coffee ought to be made with a blend of grass-fed butter, Upgraded™ coconut oil (from upgradedself.com) and low-toxin Bulletproof® Upgraded™ Coffee Beans. And it is indeed no coincidence that Bulletproof Coffee tastes a little like yak butter tea. Dave Asprey, the ‘Bulletproof Executive’ was struck with the inspiration he needed to develop the drink during a yak butter tea break on a climb of Tibet’s Mount Kailash. As for why I found it in a health food café – and why all the concern with the quality and composition of the ingredients? Well, Bulletproof Coffee enthusiasts overlap significantly with fans of the ‘paleo diet,‘ which is designed to imitate as far as possible the pre-neolithic dietary ecology to which our hunter-gatherer ancestors were adapted.

There is indeed some good anthropological evidence showing that diets of contemporary hunter-gatherers – including those that are high in animal fats – reduce the risk of chronic ‘diseases of civilization’ like diabetes and cardiovascular disease. There are however equally good reasons to question the notion that we and our food species ended our evolutionary relationship before the neolithic revolution. (And using studies of contemporary hunter-gatherer populations to make claims about ‘paleo’ lifestyles can easily slip into ahistorical retellings of what Adam Kuper terms the myth of primitive society.)  So what really intrigues (and frankly disturbs) me about Bulletproof Coffee is precisely the extent to which it comes wrapped up in a discourse that you might term ‘paleo-primitivism.’ In telling the story of Bulletproof Coffee’s origins, Dave Asprey marries his enthusiasm for the paleo diet with a depiction of Sherpas as ‘ubermen’ or ‘a race of Bulletproof genetic freaks.’ Asprey’s fascination with both yak butter tea and the genetics of the Tibetan ‘ubermen’ is presented on his website in terms of his interest in biohacking. The biohacking discourse surrounding Bulletproof Coffee seems to reveal quite neatly something about the idea of the ‘hacker’ that Brett Scott recently discussed in a piece for STIR Magazine. The figure of the hacker exemplifies collective possibilities for creative and mischievous subversion of contemporary capitalist organization – but it can also reflect an avowedly individualistic, masculine libertarian drive towards self-empowerment through those same stifling structures.

It might seem like a stretch to claim that a way of preparing coffee encapsulates (or at least embraces) the spirit of contemporary capitalism. But it is not a particularly novel point to make. . Wolfgang Schivelbusch has suggested that the wakeful and sober properties of coffee (it was described as ‘antierotic’ by Jules Michelet) found an elective affinity with the early Protestant Ethic. Thus coffee consumption played its part in the construction of the seventeenth century bourgeois gentleman, who sought to keep both his inner life and his bookkeeping in equally good and rational order. And even if sugary coffee never quite rivalled sweet tea as a ‘proletarian hunger killer‘ in nineteenth century English factories, it certainly found a place in the American factory of the early twentieth century. So much so that marketing executives in post-war America were deeply troubled by the beverage’s lack of prestige. Anthropologist William Roseberry has told in some detail the fascinating story of the role that Ogilvy and Mather played in cultivating new class and consumer identities through coffee consumption. The American coffee industry of the 1980s first imagined, and then actively sought to produce, two distinct new coffee cultures: one based on ‘gourmet varietals’ and drawing on wine-tasting culture; the other for the ‘soft drink generation’ and heavy on the flavoured syrups.

So the cultivation of economic subjectivities and the fostering of new coffee cultures is often tightly intertwined. In the case of Bulletproof Coffee, its promoters draw at times on what Judy Wajcman calls a ‘culture of ostentatious work performance.’ Bulletproof Coffee, says Asprey, works every day for ‘for chart-topping musicians, professional poker players, MMA fighters, Olympic athletes, entrepreneurs, and Fortune 500 CEOs.’ This is not, then, an everyman’s coffee. It is, on the contrary, an uberman’s coffee. And Bulletproof Coffee is just one part of Bulletproof Biohacking, which weds a concern with self-improvement to a ‘systems thinking approach to our own biology.’ Aspers applies engineering and ‘MBA thinking’ to his own biology and ends up with ‘self upgrading‘: a blend of biohacking, the quantified self movement, and the related 4-Hour Work Week programme. Let me quickly stop in their tracks anyone who might think that the 4-Hour Work Week has anything at all to do with Keynes’ dream of his grandchildren enjoying a leisurely 15-Hour Work Week. Rather than Keynes’ dream of collective leisure enabled by technological efficiency, Tim Ferris’ 4-Hour Work Week programme depends upon ‘geographic arbitrage’ and ‘outsourcing.’ One of Ferris’ pedagogical anecdotes is about an editor at Esquire who successfully ‘outsourced his life.’ In this editor’s words, ‘Fun things happen when you earn dollars, live on pesos, and compensate in rupees, but that’s just the beginning.’ This kind of ‘life-hack’ is emblematic of the darker, individualistic, self-empowerment side of hacking to which Brett Scott alludes in his STIR piece. It is absolutely, by definition, not available to everyone. It effectively relies upon what Samir Amin terms ‘imperialist rent,’ or the structurally determined ‘differential in the prices of labor powers of equal productivity’ between citizens of different states in a global economic order.

But back to Bulletproof Coffee and biohacking. One of the few social scientists working on biohacking, Alessandro Delfanti has described the movement as the ‘direct transposition of free software and hacking practices into the realm of cells, genes and labs.’ Biohackers or garage biologists carry out procedures like DNA extraction with household objects, and work outside the innovation-stifling bureaucratic structures characteristic of contemporary universities and ‘Big Bio’ firms (which so disturb and frustrate thinkers like Neal Stephenson and David Graeber). What Brett Scott points out for the hacker ethic in general, Delfanti finds among biohackers: some are committed to open source, democratized science outside of Big Bio firms; others see garage biology as a way of enabling the next revolution within Big Bio (just as garage hacking did for Big Software). In his commentary on biohacking, anthropologist Christopher Kelty unpacks the biohacker identity into the distinct subjectivities of ‘outlaw,’ ‘hacker’ and ‘Victorian Gentleman.‘ The outlaw operates in a no-man’s-land outside Big Bio, the hacker works and tinkers within it. And the Victorian Gentleman scientist ‘shares with the outlaw and the hacker an appreciation for openness, transparency and a bit of magical delight, but with it comes a bit of paternalism, a bit of the hoary, learned wisdom of the well-born and justifiably eccentric…The Victorian Gentleman’s innovation is the innovation of Big Bio in miniature, but projected on a big screen and tuned to different purposes, critical purposes and renewals of energy and focus.’ If Bulletproof Coffee is a biohack, it is the biohack of the Victorian Gentleman, or of Brett Scott’s less progressive, individualistic hacker: committed to ‘ostentatious work performance’ (if only for four hours a week), membership – quite literally – of the Alpha Male Club, and hacking yourself rich and relaxed while raking in imperialist rent.

Deborah Lupton’s recent article on digital health technologies engages with some aspects of bio- or ‘health hacking’ and the quantified self movement: