Social and Cultural Components of Obesity 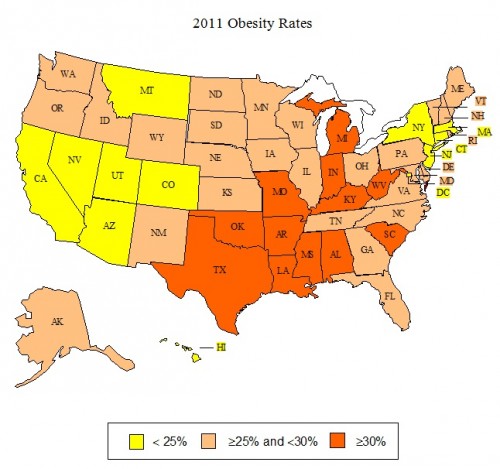 Recent California statistics  by the University of Washington’s Institute for Health Metrics and Evaluation expose a contradiction plaguing weight loss initiatives in the United States. More and more Californians are exercising, but obesity rates are rising across the state. Between 2001 and 2011, all of the counties in California saw an increase in rates of exercise. The increases were particularly dramatic for women; the rates of women who completed a sufficient amount of physical activity in a week rose from 50.7% in 2001 to 59.25% in 2011. Given the link between exercise and weight loss, increased activity should be related to a decrease in the number of obese people. Yet, this is not what researchers observed. Instead, the Health and Metrics Evaluation study found that obesity rates are on the rise: rates have increased in every county in California. Despite more exercise, Californians are not necessarily maintaining a healthy weight. The researchers concluded that Californians, like many people throughout the United States, are consuming more calories than they lose through activity. Diets and caloric intake are still too high, meaning individuals hold onto or even gain weight, rather than losing it through exercise.

It is not surprising that caloric intake continues to be a problem for many Californians and others throughout the United States. Healthy eating habits are mostly treated as individual issues. The United States Department of Agriculture (USDA) provides guidelines for food consumption with initiatives like the food pyramid and choose my plate; the programs suggest that individuals should eat a certain portion of vegetables, fruit, protein, dairy, grains, oils and fats. But the intervention largely stops there. Few government and medical initiatives address larger structural and cultural issues that might prevent individuals from making healthy choices about their food consumption. Just a few examples include the class disparities in access to food, the unhealthy amounts of sugar and fat offered in our publically-funded schools, and the widespread availability (and the potentially addictive quality) of fast food, especially for children.

Yet, we have seen a few movements in the last couple of years that recognize food consumption as a social and cultural issue. In 2010, ABC aired a series focusing on chef Jamie Oliver’s attempts to change eating habits in one of the unhealthiest towns in the United States. Jamie Oliver’s Food Revolution tackled major obstacles to healthy eating in a West Virginia town, starting primarily with the food served in schools. Oliver found that the publically-funded school lunch program served children milk with too much sugar, food with too much fat, and meals with few redemptive qualities. Oliver met resistance from the community and the school system, but ultimately the small town in West Virginia started to change. Even after he left, reports show that students are still fed healthy and nutritious lunches. This initiative, reworking school lunches, is a good example of how to produce change at a broader social and cultural level, rather than treating obesity as an individual problem to be dealt with at home.

Another movement that comes to mind is San Francisco’s ban on marketing fast food to children by offering toys. Drawing on the idea that children will find saturated fats more appealing when coupled with a toy, San Francisco required that fast food chains remove the small plastic trinkets from their kid’s meals. While the initiative might not have been the most successful (note: McDonald’s ultimately found a loophole and started charging 10 cents for the toy, rather than providing it for free with the meal), this is the type of movement that addresses not only the cultural component of food consumption, but also our ability to use our social institutions to create widespread changes.

These are the types of initiatives that are needed in order to reduce obesity rates. If we continue to think about weight issues as individual battles, we will fall short. We need larger social and cultural changes in order to ensure that individuals have access to the food and information necessary to maintain a healthy weight.