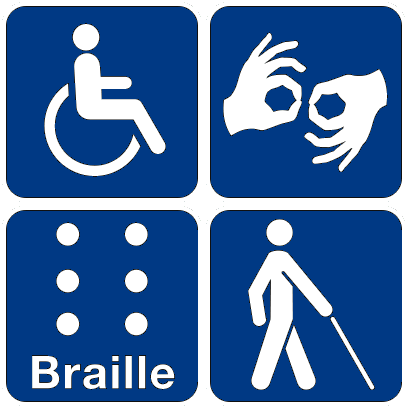 Characters with “disabilities” are being more regularly depicted in entertainment media: The lead character of House suffers from chronic pain and walks with a limp; Glee has characters with Down’s syndrome, severe OCD, and mobility restrictions requiring wheelchairs; Perception has a schizophrenic crime-solving professor. And, this coming October, Turner Classic Movies will be showcasing some 20 movies featuring disabilities and disabled characters in a series the channel is calling “The Projected Image: A History of Disability in Film.” While not all depictions of minority groups in the media are necessarily good—in fact, we generally must be quite vigilant about how the media represents socially marginalized individuals—it has been nice to see an uptick in the visible presence of the differently-abled. Exposure through the media can help to normalize identities, bodies, and ways of being that seem abnormal or foreign.

I’ll admit it…I’ve been catching up on missed TV this summer break. But I’ve actually been thinking a lot about disability too. This summer, I taught a course on reproductive technologies, and assigned Rayna Rapp’s Testing Women, Testing the Fetus: The Social Impact of Amniocentesis in America. Rapp describes the process by which different women (and some men) engage with the technologies of prenatal testing, and what they do with positive results (remember that “positive” in the world of prenatal testing carries a different meaning). The number of women in her study who choose (or know they would choose) to terminate pregnancies when a genetic disorder or disability appears on the test results is staggering. While I will pass no judgment on a woman’s (or couple’s) decision to terminate such a pregnancy—in the face of social stigma, financial burdens, failing health care systems, I wouldn’t blame anyone—it does speak to the social problems that burden people with disabilities in our society. However, when discussing the book, some of my students seemed more comfortable with selective termination (though they couched this in the concern for child suffering) than with the idea of restructuring society to make it more disability-friendly!

The issues surrounding disability have gained traction in the academy just as they appear to be doing in popular culture. Critical studies of disability attempt to change a number of things in conventional thinking on disability. First, they show the social construction of disability. This often includes a discussion of medicalization. Something that wasn’t always seen as a problem becomes medicalized, pathologized, seen as a disorder and characterized accordingly. A good example of this process of medicalization can be seen in Meika Loe’s (2001) discussion of Viagra—erectile dysfunction, once seen as part of aging, now becomes seen as a treatable pathology.  Second, they show how society itself can be disabling. The structure of society—the expectations of the economy and workplaces; the laws and policies that govern building construction, medical leave, and health insurance; the stigma placed on othered bodies and ways of being—all of these taken together can be more disabling than the individuals’ impairments alone. Even small socially constructed values can complicate the life of someone with a physical or mental impairment. For example, I’ve seen documentary footage of individuals who, because of the inability to control the muscles of their arms, use their feet and toes in the way that most of us use fingers and hands; despite the dexterity with which they use these digits, the strange looks and stares from strangers often keep them from doing this in public, thus limiting the degree to which they can exist in the public sphere. Third, they reveal the discrimination against people with disabilities, which can have devastating effects.

Given the growth in disability studies, and its growing acceptance in academic spheres, I was disappointed by my students’ failure to grasp the problems with the way society typically conceptualizes disability. I’m sure that part of the problem is that the media portrayal is relatively new, but also that it isn’t always done in the most critically-informed way (see, for example, this critique of Glee’s character, Artie, who is played by an able-bodied actor). Though it seems as if the trend is in favor of more critical understandings of ability and disability, I think we must continue to press for more, better, and more nuanced depictions of disability, depictions influenced and created by people with disabilities themselves.

Loe, Meika. 2001. Fixing Broken Masculinity: Viagra as a Technology for the Production of Gender and Sexuality. Sexuality & Culture 5(3): 97-125.