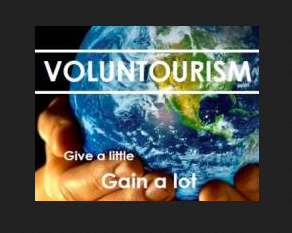 After spending five weeks conducting ethnographic research in Nepal, I was ready to return to the United States and many of the luxuries of a developed nation. I knew that it would take time to adjust my sleep schedule. I also figured that it would take some time to return to the fast-paced life of New York. What I did not expect was the overall difficulty I would have returning to a developed country. The air conditioning is so cold. The price of day-to-day life is so high. People’s daily problems are so trivial.

The majority of literature on volunteer abroad programs, voluntourism, and service vacations suggests that volunteers frequently have a relatively small impact on the people and countries where they volunteer. These scholars suggest that volunteers frequently frame their experience in terms of what they got out of the experience rather than what they were able to give to the organizations and people in the nations where they worked.

Obviously, my difficulty readjusting to being back in the U.S. is self-centered, based on my personal experiences and what I realized while I was living in a developing country. And when one of my friends asked me, “Do you think you made a difference,” I had to spend time reflected on the question before I could answer.

“Yes. I do think I made a difference,” I told my friend. During my trip I spent a lot of time asking the Nepali women I worked with how they felt about the volunteers who worked with their organization. Every single one of these women praised the volunteers. They had nothing negative to say about those individuals who traveled across the globe to donate time, money, and other resources. Even when I frankly asked them what were some of the challenges of working with volunteers, the only thing these women told me was that they wished the volunteers could stay longer.

I had spent enough time with the organization and had enough conversations with the director to know in the past there had been issues with volunteers. I knew there were incidents where volunteers unknowingly offended women with their language, by being ignorant of Nepali culture (wearing shoes in the house or not being conservative enough in their clothing choices), and making the women uncomfortable in social settings by drinking excessively in restaurants or pressuring the women to go to Western style dance clubs. And yet, when asked, the women only praised the volunteers past and present.

So, what did I contribute? I spent the first half of my trip rewriting the content on the organization’s website. Even the most educated members of the organization had difficulty writing in English. The website was a key tool for the organization to network with partner organizations, access support from volunteers and individual donors, and provide resources on human trafficking.

I also taught English. Teaching English is a common assignment for volunteers abroad. It is challenging because organizations frequently do not have textbooks and volunteers come and go, which makes English lessons choppy and non-linear. This was the case when I arrived. I had no idea how to teach English as a second language. I had no resources. I spent a lot of time googling ESL. The diversity of ability between the women in my organization made it challenging to keep those at the extremes interested and engaged in the lessons. However, I had the benefit of being an instructor. I worked with previous volunteers and we created structured lesson plans. We created a file where we stored all the lesson plans. We created structured means of evaluating the students’ progress. And at the end of my trip, when three additional volunteers joined me, we were able to break into groups where we could work with the women at various levels.

Finally, I helped the organization apply for grant money. In doing this I also was able to help them network with several grant writers I knew in the U.S. As I mentioned before, even the most educated women in this organization had limited English writing skills and needed assistance writing applications. This task was not mine alone. I quickly noticed that former volunteers continued to help the organization apply for grants, editing statements, and prepare answers for phone and skype interviews.

I guess in some ways that is why I am having such a difficult time adjusting to being home. There is a part of me that is still working in Nepal. There is a part of me that is looking at my life through the eyes of my new Nepali friends. I am living in-between two worlds. I do not know how long this will last. Maybe after a month or two I will fell less connected. But then again, I plan to go back to Nepal in December. So, maybe I will always be living in two worlds.
Further Reading:

Tiessen, Rebecca, and Barbara Heron. 2012. “Volunteering in the Developing World: The Perceived Impacts of Canadian Youth.” Development in Practice 22(1):44–56.

Vodopivec, Barbara, and Rivke Jaffe. 2011. “Save the World in a Week: Volunteer Tourism, Development and Difference.” European Journal of Development Research 23(1):111–28.