He, Him, His, She, Her, Hers, They, Their, Theirs, Zi, Zir, Hir…: Pronoun Use and Gender Policing 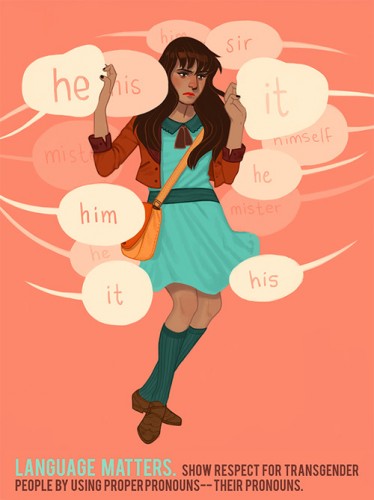 Have you read the recent New York Times article about Bruce Jenner and about their transition? While their gender identity is not yet confirmed, media has picked up this story and gone wild with the concept of olympian turned family millionaire turned media star is now “turning” into a woman. Every time, however, that I read a new headline about this story, I get shivers up and down my spine, not to mention the amount of pure rage and disappointment on how the media not only misrepresents, but actually oppresses the trans community by mislabeling these individuals with the use of the wrong pronouns. Simply put, refer to the person using the pronoun they identify with.

While that concept does not seem so difficult, rarely are pronouns correct, and this is a function and consequence of how we police gender roles and exert power of the cisgender identity and norm over all other identities. For example, in the New York Times article, the authors write:

There have been other prominent transgender people in recent years: Chastity (now Chaz) Bono, whose parents are Sonny and Cher; Larry (now Lana) Wachowski, a producer, director and screenwriter; and Bradley (now Chelsea) Manning, the soldier convicted of leaking classified documents in the WikiLeaks case. The most famous example in sports remains the tennis player Renee Richards, who started life as Richard Raskind, had gender reassignment surgery in 1975 and won the right to play on the women’s tennis circuit.

Breaking this down, the authors consciously chose to not use these individuals’ real names they identify with that match their real gender identity, but rather what they deem as “real”, which in actuality, is a social construction of normal, ideal, and “natural” gender that is inextricably intertwined with biological sex (which itself is socially constructed as well). These names, Chaz, Lana, and Chelsea are how we should be referring to these individuals, because that is who they are.

Another example in this horrid article includes:

“He was a hell of an athlete,” said Keith Jackson, who covered Mr. Jenner’s Olympic triumph while working as a sportscaster in 1976. “Women would stand in line just to shake his hand; young people responded to him — the Olympians at all levels, as far as I could tell. The announcer for the high jump used to give Bruce the business for being so attractive to everybody.”

While, yes, in the past Bruce identified as a male and so in the context of talking about Bruce as an athlete, I could maybe justify use of male pronouns, this quote exemplifies the overt heteronormativity and policing of Bruce’s masculine gender in juxtaposition to the (obviously natural and opposite) feminine characteristics of a woman as Bruce transitions. In the past, Bruce was all man- athlete and lady’s man. Now? Well… It also draws my thoughts to an overt concept of gendered nationalism (a la Yuval-Davis), likely even homonationalism, in which we frame Bruce as the young, viral olympian, a representative of the strength and power of America, so we frame their transition as a loss or a feminization of the nation itself.

This isn’t to say that this is the only place in which we police gender through pronoun use, it’s just one of the first major and visible places where we can publically critique its flaws. I think particularly of public records and forms, where individuals only have the choice of “male” or “female” when asked gender. There is the rare occasion that “other” is included, with good intentions, but has damaging effects, in which we are literally othering non-cisgender binary individuals. I always make it a point when I am introducing myself to not only state my name, but also include the pronouns that I use.

On a side tangent, that is an important thing to note: never should it be preferred pronoun use (as in “which pronouns do you prefer?”), but pronouns that you use (as in “what pronouns do you use?”) The former indicates that a preference is a choice and an opinion and other pronouns are acceptable, whereas the latter indicates that the pronouns to which you refer to someone are not a choice, but mandatory. This practice also gets individuals into the habit of never assuming how individuals identify, as identity and presentation are not always aligned.

Kevin Nadal (2013), in discussing sexual microaggressions, makes note on trans-specific microaggressions, which is especially important seeing the increasing rate of violent crimes against trans-individuals, especially women of color. While these pronoun and name slips (if they are slips, giving the benefit of the doubt) may be unintentional, they invalidate and deny individuals their lived reality and existence in addition to normalizing and upholding cisgender identities and roles. So while Bruce may not have new pronouns as of yet, at best the authors should have chosen a more neutral pronoun such as “they,” as I consciously did throughout this article, or attempt to refer to the individual by name (the name they go by). Otherwise, we are just continually limiting the definition of gender and police the boundaries of who we consider to be a man or a woman (or any other gender identity a person may identify).