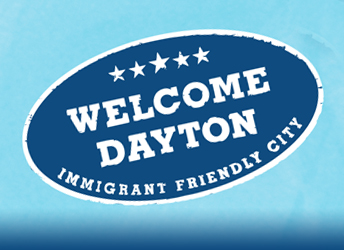 Photo courtesy: Official Site of the City of Dayton, Ohio

Editor’s note: This post has been printed with permission of the author.

Last fall, the Rust Belt city of Dayton, Ohio approved the “Welcome Dayton Plan” —  an attempt to foster the inclusion of immigrants and refugees in a city devastated by years of economic decline. Dayton’s plan comes at a time when two separate but not unrelated fires are blazing across the country: economic crisis and anti-immigrant sentiment.

We should certainly applaud Dayton’s willingness to embrace immigrants and refugees, especially at a time when many cities and states are passing sweeping anti-immigrant legislation. Yet for this countertrend to generate meaningful social change, it must be more than a redevelopment ploy. What we need is the formation of class-based alliances that are unwilling to submit to anti-immigrant scare tactics and eager to challenge the economic processes that have distressed these communities in the first place.

My position stems from research I conducted in Hazleton, Pa. — a city much like Dayton that is well past its economic prime, with its share of abandoned buildings and empty storefronts. In 2006, Hazleton passed the Illegal Immigration Relief Act (IIRA), one of the first in an eventual wave of state- and local-level legislation that includes Arizona’s SB1070 and Alabama’s HB56. Supporters touted it as a means to root out undocumented immigrants and the “social ills” that supposedly accompany them.

A closer look at the politics surrounding the Hazleton law reveals a much more complex situation than the one offered by the oft-repeated “illegal is illegal” mantra. For one, unauthorized migrants have not increased crime in Hazleton. As revealed when the ordinances was challenged in court (i.e., Lozano et al. v. Hazleton), of the 8,571 arrests made in Hazleton between 2001 (approximately the year Latina/o migrants began arriving in Hazleton) and 2006 (the year the ordinance was proposed), undocumented migrants accounted for just 21 of all arrestees—that’s 0.25%. This finding echoes what sociological research has discovered in other contexts: immigration—undocumented or not—does not increase crime (see Lee & Martinez 2009). Despite lacking a basis in reality, however, evoking racially charged images of the crime-prone illegal border-crosser has had important political consequences in Hazleton, allowing officials to divert public attention away from how immigration, economy, and locale are interconnected.

In the increasingly cut-throat global economy, Hazleton, Dayton and other down-but-not-out towns have found themselves virtually abandoned by the federal government and left to their own devices to stay economically afloat. As a result, many have taken desperate measures such as offering massive tax breaks and restricting workers’ rights in an effort to lure big business. Smokestack chasing, some call it.

In Hazleton, the beating of the anti-immigrant drum drowned out discussions of the wide-ranging measures officials were willing to take and the consequences wrought by these actions. Amidst the hoopla of the Hazelton law, most residents failed to notice that a state-level corporate tax break, the Keystone Opportunity Zone initiative (KOZ), which was supported by the same community leaders who had been criticizing undocumented migrants, gave more than a decade-long tax break to large, multi-national corporations. These tax breaks reduced city revenue and adversely affected Hazleton’s ability to provide community members with basic social services. Not only that, but many of these corporations had reputations for offering low pay, exposing workers to dangerous conditions, and relying primarily on the labor of undocumented migrants – corporations which, in turn, began attracting an immigrant labor force to Hazleton (see Longazel & Fleury-Steiner 2011).

Historian David Roediger (1991: 12), drawing on the work of W.E.B. Du Bois, has noted that “[w]hite labor does not just receive and resist racist ideas but embraces, adopts, and, at times, murderously acts upon those ideas. The problem is not just that the white working class is at critical junctures manipulated into racism, but that it comes to think of itself and its interests as white.” When I interviewed working class whites in Hazleton, I usually found myself listening to a rant about the city’s new Latino/a population.  But when the topic shifted to economic issues, it was revealed that many of these workers felt that they had indeed been short-changed by their community leaders. In a country with such a hideous history of racial and ethnic oppression, demonizing people of color is still too common, especially in times of distress. When residents were able to cast aside resentful rhetoric and use class rather than race to construct their identities, however, they often came to the realization that folks on both sides of the so-called “immigration debate” were part of the same struggle: trying to make ends meet in an economic climate that increasingly favors the rich at the expense of working people of all colors.

Unfortunately, this vital economic perspective remains on the backburner in Hazleton thanks in large part to demagogical politicians who continue to scapegoat immigrants while portraying their efforts as a populist crusade meant to keep Hazletonians safe. My research reveals that such denial has done Hazleton and its residents — white and Latina/o — more harm than good. The city shows few signs of overcoming decline as developers continue to chase smokestacks rather than encourage local entrepreneurs, including the new Latina/o small business owners who have revived the city’s downtown. Meanwhile, only a handful of community activists have spoken out against KOZ and concerned citizens have given up directly challenging the criminalization of the city’s new migrants.

As Dayton and other struggling Rust Belt cities try to find their economic footing, they can learn much from the Hazleton case, and it appears they already have. In deciding to become immigrant friendly, Dayton has taken a path toward inclusion rather than exclusion, laying out goals such as facilitating immigrant small businesses and improving cross-cultural communication. But inclusivity in rhetoric is not inclusivity in practice.

Pro-immigrant initiatives like Welcome Dayton should be more than another weapon used to fight the economic war, more than an attempt to position the city as a cosmopolitan hotspot for the sake of attracting entrepreneurs. Rather, such initiatives should represent genuine efforts to remake post-manufacturing cities from the ground up and should facilitate the development of class-based alliances willing to challenge outsourcing, exploitation, and other economic processes that have eroded the Rust Belt economy. As much potential as the Welcome Dayton Plan has, thinking that “they” are “our” ticket out of this economic mess is just as misguided as blaming them for it. Thinking that “we” can prosper together is not.

The Wages of Whiteness: Race and the Making of the American Working Class by David Roediger

Jamie Longazel is an Assistant Professor of Sociology at the University of Dayton and was previously a Doctoral Fellow at the American Bar Foundation. His research interests are in the areas of race, law, and inequality, and his recent work has appeared in the Chicana/o-Latina/o Law Review, Race & Justice, and the Journal of Criminal Justice. He is currently working on a book manuscript from the ethnographic study he conducted on the community politics surrounding Hazleton, Pennsylvania’s passage of the Illegal Immigration Relief Act (IIRA).