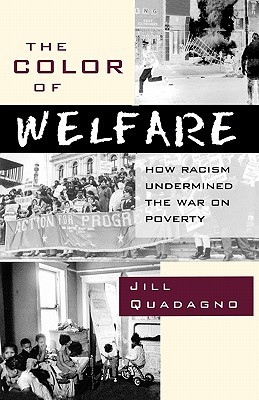 Pop Quiz! What do Brandeis, UCLA, and Fayetteville Universities have in common?  Answer: They all have The Color of Welfare: How Racism Undermined the War on Poverty by Jill Quadagno on their 2014 syllabi.  This book is taught in departments of history, public affairs, social work, sociology, and political science.  Professors use it to examine sociological methods, poverty, race, politics, and welfare state.  For many students this was a life changing book.  This book ignited our interests in studies of inequality and even though it is already 20 years old the issues Quadagno raises are still fresh and relevant today.

The Color of Welfare takes a long look at “American Exceptionalism” by tempering liberal explanations for the reasons the U.S. is the last developed country to provide universal healthcare, family allowances, paid parental leave, or early childcare.  Quadagno adds an often overlooked ingredient: race.  “This book is about the price the nation still pays for failing to fully incorporate African Americans into the national community. That price is a welfare state that lacks the basic protection that other industrialized nations take for granted.” (p. 5)  Quadagno examines the U.S. social safety net, both universal and programmatic, to reveal the racial biases.

The U.S. is often left behind in many ways that continue to astonish me as a voting citizen.  For example, even though women have the right to work after having children, excellent, affordable childcare is many times prohibitive to work especially if a family wants more than one child.  While we may use the rhetoric of “choice” when addressing this challenge as Sociology Lens discusses here and here, for many women who need it most, a feasible choice is not available.  Because early national daycare programs were tied to AFDC eligibility, they were ultimately rejected in Congress.  Initially national daycare only minimally served the middle class and unfortunately all women lost a benefit that could have increased their ability to earn money outside the home unencumbered by expensive childcare.

The issue of child welfare is just one of the many Quadagno deals with in The Color of Welfare.  She also tackles, democratization, political participation, employment opportunities, union membership, housing, and of course direct cash transfers to needy families.  In every policymaking area examined the reader is ushered through the structural racism at the core.  While other nations were organizing around a strong middle class with rights for their laborers, the U.S. was demarcating deserving and undeserving poor – based on color.

Scholarship in 2014 also recognizes the continued importance Quadagno’s work in the national dialogue about the role of race in the welfare state.  Gender, immigration, and the legal implications of welfare since ending TANF in 1996 are some of the topics that authors are examining through the lens of racial tensions and policy making.  In another couple of years I predict a slew of research on the myriad of ways policy makers in Washington have obstructed President Obama’s agenda because of his race.

In January of 2014, The Office of the President issued a 50th anniversary progress report on the War on Poverty.  In it, they say that although poverty has decreased by one-third since 1967, in 2012 there are still more than 49 million Americans living below the poverty line.  The report credits the many programs like SNAP, TANF, and EITC with reducing the poverty rate overall and lifting more than 27 million people each year above poverty level.  Overall the report touts the decreased rate of poverty since the War on Poverty began.

The President’s report also highlights the very real issue of economic mobility and acknowledges clearly that it’s very difficult for children to move into the next income quintile as adults.  Exposure to safety net programs such as The Head Start program increases the likelihood that children will complete high school and attend college thus increasing their chances for economic mobility.  The President’s program to continue to decrease the number of people in poverty in the United States focuses on tax credits, affordable healthcare, and of course investment in education.

And now I am off to conduct a face to face interview with Jill Quadagno, author of The Color of Welfare, to get her progress report on the relevance of color in contemporary policy making.  I will outline her response in my next post.  In the meantime, I recommend you read The Color of Welfare again.  It is definitely worth a couple of hours to remind ourselves how much remains unchanged in 20 years.