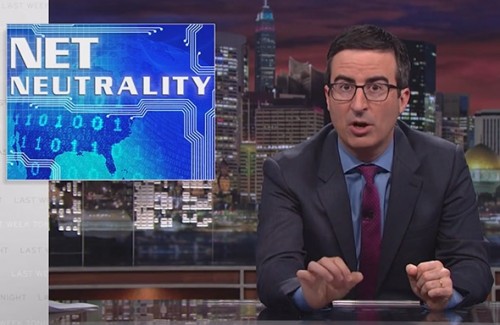 This weekend, a House oversight committee announced plans to investigate the Presidential influence over the Federal Communications Commission’s new proposal governing how broadband providers treat traffic on their networks.  This investigation is a response to the FCC Chairman’s proposal to subject broadband providers like Verizon, AT&T, Clearwire, and Comcast to regulations similar to those of other utility service companies.  According to an op-ed written by Tome Wheeler, the FCC Chairman, the regulations include “the strongest open internet protections ever proposed by the FCC”.

For the past few months the FCC has been listening to consumers and innovators around the country.  A recent 13 minute rant by John Oliver seems to have disabled the FCC’s commenting system for a few days.  Oliver used his comedy segment to explore the apparent cronyism at the FCC.  He challenged his viewers to take this opportunity to tell the FCC how they feel about a two-tiered internet.  Apparently the viewers responded with force.  Even big broadband consumers like Netflix, Google, and Facebook are against a two-tiered access to delivery of content.

The broadband proposal of moving some internet content faster than others is a new version of the 20th century social problem dubbed the “digital divide”.  Digital divide describes the disadvantage of those who are either unable or choose not to make use of technology in their everyday activities.  The term, digital divide, refers both to access to computer technology and the ability to use computer technology.  These gaps in access and ability are believed to widen other disparities between populations inside the U.S., creating “information haves” and “information have-nots”.  The digital divide raises significant concerns about social exclusion for those persons without computer access and internet services in their homes.

We also know, from our ongoing attempts at equalizing the technology playing field that digital divides are very difficult to overcome once entrenched.  Access to the internet is limited in many racial minority and low income families.  Late in his second term, President Clinton allocated $100 million to open technology community centers in low income neighborhoods and $2 billion in tax incentives for businesses who donate computers to schools, libraries and technology community centers.  Another $150 million was set aside for teacher training to use technology in the classroom.  Later, the Bush administration cut the direct monetary assistance but kept in place tax incentives promoting corporate computer donation programs.  More recently, cities are providing blanket coverage to all their residents.  The hope is that free internet will provide job and educational opportunities to under served populations thus mediating some of the digital divide outcomes.

The challenge for current digital divide initiatives is that findings remain unclear as to whether equal access to technology has much impact on broader social disparities.  The majority of reports that proclaim the effectiveness of computer access initiatives do not show conclusive evidence of improved results with the inclusion of computers and advanced technology training.  Researchers can point to differences in access and differences in academic performance but cannot draw a causal link between the two.  Nathan Jurgenson discusses other digital divides he calls “non material divides” here and here.

Back to the issue of net neutrality.  How does this all connect?  Fundamentally, when broadband providers privilege certain groups with access to data “fast lanes” they are constructing a new digital divide.  Once that divide is in place it is difficult to establish a connection between access/ability and economic outcomes.  Business start-ups and smaller internet providers will claim that they are disenfranchised in the technological marketplace because they are not able to generate the funds necessary to compete in an unequal administrative system.  They will claim, maybe in court, that they are being discriminated against and that is preventing their success.  Harm caused by discrimination is difficult to  verify because there is likely no intentional act to harm.  Favoritism and privilege are usually the cause of the unequal outcome – the harm.  However, it is very difficult to establish intent to harm when the action performed was directed at helping.

Broadband providers are blowing this dog whistle hoping the rest of us, who study structural inequality, will not hear it.  They know that a “favor” or a kind gesture to others in their group fashions a power structure difficult to both identify and deconstruct through typical legal avenues.  Without evidence for intent to harm, legal challenges to an unregulated internet favoring big business will stink of out-group hostility but will be unverifiable.  Once a two-tiered internet is in place, creating the 21st century digital divide, demonstrating measurable harm caused by this system will be grueling.

Greenwald, Anthony G and Thomas F. Pettigrew. (2014) “With malice toward none and charity for some: In-group favoritism enables discrimination.” American Psychologist. Vol 69(7), p. 669-684

Ritzer, George and Nathan Jurgenson. (2010) “Production, Consumption, Prosumption: The nature of capitalism in the age of teh digital ‘prosumer’. Journal of Consumer Culture. Vol 10(1), p. 13-36.