Riot Grrrl and the Rejection of Resonating Frames 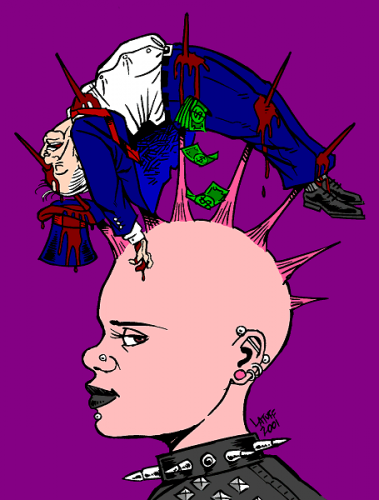 A few weeks ago, I went to see The Punk Singer, a new documentary about Kathleen Hanna – a force within the Riot Grrrl movement. I was mentally and emotionally transported back to the 1990s, reflecting on my late-teens-and-early-20s self. I became nostalgic for that raw anger at injustice channeled into high energy and creative expression, carried along by a sense of excitement and hope, and the supportive feeling of community that, at times, largely consisted of the feminist music and poetry that gave me strength to speak out and served as a reminder that there were other women out there like me. I was struck by the powerful feelings I still experienced thinking about that subculture, and how much that period of time positively shaped who I am today.

So when I read the article by Todd Nicholas Fuist (2013) in the December issue of Sociology Compass, I started to apply it to the Riot Grrrl phenomenon. In “Culture Within Sites, Culture as Resources, and Culture as Wider Contexts: A Typology of How Culture Works in Social Movement Theory,” Fuist discusses the predominant ways culture has factored into the study of collective action so, as scholars, we can think more clearly about our theorizing. He fleshes out a typology of three ways social movement scholars have understood culture, listed in the title of the article. For this post, I’d like to focus on the third type: the wider culture outside of movements or, how that wider arena impacts social action.

Wider cultural contexts of the United States in the 1990s enabled Riot Grrrl in some ways. The lyrics to a song from Hanna’s new band, The Julie Ruin, sets the scene: “we made tiny islands where we didn’t have to be afraid,” in scenes dominated by “boys in bands who acted like our dads when they were drunk.” In this sense, Riot Grrrl was a rejection of the cultural sexism of the larger punk scene and the patriarchal family structure with all its trappings. The Riot Grrrl fiercely confrontational disposition didn’t exactly resonate with many members of the wider culture outside the new scene but it did resonate with a smaller audience: young women, angry and alone, who would create and strengthen the fabric of a new community. This provides the material for examination by scholars considering ways culture creates a community from which to mobilize, the first area of study Fuist explains. But it also points to some complications with thinking about the ways the wider culture may enable or constrain social movement opportunities.

Many movement actors take audience and cultural opportunities into account when devising frames, specifically actors of formal organizations, often non-profits, seeking to win the hearts and minds of the public-at-large to join the campaign. But other movement actors do not take interest in appealing to a larger audience or the accepted cultural arena in which it operates. Yet the lack of resonation of oft-putting tactics in their repertoires means little in what they arguably might be accomplishing. I’m thinking of movements or collective actions that are referred to as extreme, invoke a narrative of waging war on normalcy, or adopt presentation styles that shock or offend publics beyond the immediate targets. Queer liberationists in the 1960s and ‘70s were sometimes denounced by gay rights activists who claimed the former made them look bad, hurting their chances for change. More recently, Gay Shame actors embrace the identity of a virus and directly confront and oppose Gay Pride Parades, seeking “nothing less than a new queer activism that foregrounds race, class, gender and sexuality, to counter the self-serving ‘values’ of gay consumerism and the increasingly hypocritical left” (as posted on the Gay Shame website).

Radical strands of movements can serve as a persistent challenge to their mainstream counterparts, helping movements avoid cooptation, pushing against the tendency for groups to moderate or tone down tactics and messaging, or to settle for lesser gains that don’t address the root of the problems.

In his article, Fuist says, “Despite the widespread agreement that culture matters and the proliferation of concepts to understand culture and social movements, how culture factors into collective action is not always apparent” (1044). I would argue that, as scholars, we could pay more attention to the times wider culture doesn’t matter to the participants of collective action, and that this perspective is key for social movements attempting to transform larger culture and forge radical change. I argue this not for the sake of scholarship alone, but for the impact scholarship has on social movement activities: the ability of movement research conclusions to either aid in planning or limit necessary strategic ingenuity. Too often, social movement actors fall into the trap of “we can’t do this or that because it won’t resonate with the largest possible audience.”

A member of popular Riot Grrrl band Sleater-Kinney, Corin Tucker describes media coverage of Riot Grrrl at the time: “I think it was deliberate that we were made to look like we were just ridiculous girls parading around in our underwear. They refused to do serious interviews with us, they misprinted what we had to say, they would take our articles, and our fanzines, and our essays and take them out of context. We wrote a lot about sexual abuse and sexual assault for teenagers and young women. I think those are really important concepts that the media never addressed.” Despite a hostile media that both echoed and shaped an unaccepting larger public, Riot Grrrls kept doing what they were doing. Had these culture producers taken seriously the reality that their messages, their clothing, their music, and their attitudes would not resonate with members of the wider culture and acceptable narratives of women’s roles, if they chose to tone it down, would they have made such an impact on women today? Or was the very confrontational rejection of wider cultural norms the key to their success in igniting a new generation of feminists?

Fuist explains that the wider cultural context creates boundaries for movements of what is and is not doable, offering scripts and tool-kits. He cites Zemlinskaya (2009) as an example, showing that Israeli peace activists who “consciously refuse or are unable to play by the rules of dominant discourses because they are deprived of the necessary symbolic capital become virtually invisible” (462). Perhaps this was the case and such a consideration is useful, in hindsight for analytical purposes, as an interesting tool of contemplation, or as a narrative to flesh out the historical context of a process of change in a given time and place. But I would caution of its usefulness as a lesson for current and future organizing – something to be taken as a prescriptive in devising social movement strategies – particularly for movements that seek more radical change or a systemic overhaul rather than policy reforms. Such a warning, if taken as an organizing formula, can limit the possibilities of collective action.