Does your life pass the Bechdel Test? 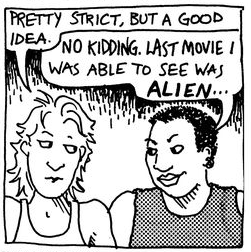 The Bechdel test is a simple but effective way of assessing the feminist qualities of a film, and how women are represented. The test was introduced by Alison Bechdel in 1985, in a comic strip called ‘The Rule’. The test asks three simple questions of a film:

1) Are there more than two (named) female characters in the film?
2) Do they interact with each other?
3) If they do, do they talk about something other than a man?

If the answer to any of the questions is no, it does not pass the test. Despite women making up 51 per cent of the population, and (one assumes) spending a large amount of the time between birth and death watching films and talking to other women about subjects other than men, the number of films that pass this test is consistently and disappointingly low. Whilst the Bechdel test is a relatively crude measurement for gender equality, it is indicative of a real problem in the film industry; a total lack of diverse, relevant, intelligent or well-developed female characters. Female characters in films are far more likely to be poorly developed, or exist simply as a prop for male characters. As an exasperated Miranda asks in the Sex and The City series: “How does it happen that four smart women have nothing to talk about but boyfriends?”

One explanation, or perhaps a symptom, of this lack of (decent) female representation is the minute proportion of the filmmaking industry occupied by female directors, producers and writers. One piece of research conducted by Stacy Smith investigates the gender roles of speaking characters in top-grossing films, and how it relates to women’s position behind the camera. She concludes that females are ‘grossly underrepresented’ in films, holding just 28.4 per cent of speaking roles. She also found that women accounted for 4.1 per cent of directors, 12.2 per cent of writers and 20 per cent of producers. Most importantly, those films that were directed, written or produced by women are more likely to pass the Bechdel test, have more (and more diverse) female characters, and are less likely to contain sexualised female characters. It seems obvious even from these figures, that a way to diversify female representation on screen is to ensure more gender balance behind the scenes.

In taking the Bechdel test one step further, it has been suggested that if the third rule was expanded to ask if the female characters talk about something other than a man, marriage or babies, the number of films that pass it falls even lower. Feminist media studies scholars such Ros Gill and Angela McRobbie have long pointed to this: a significant proportion of media and advertising perpetuates the message that everything women do is geared towards what they can buy, own or consume, in the pursuit of either men or having children. In this sense the representation in film is only the tip of the iceberg, and there is a wider issue with how women are represented: either as sex objects, (future) wives, or (future) mothers. These representations are not neutral, and are in many cases representative of wider social norms and cultural discourses.

In writing this piece I had a long discussion with a female friend, who disagreed with the premise of the Bechdel test, on the grounds that it was unrealistic. Women do, she argued, talk about men and babies. Everything in our lives is geared towards it. In this way then, the representation becomes a self-fulfilling prophecy – presenting women as one-dimensional and failing to offer a greater range of female characters. An excellent example of this can be found here. This raises the question; to what extent does real-life pass the Bechdel test? Are women’s relationships mediated or sustained by discussion about men, or related issues? If the spirit of the Bechdel test is expanded even further, to what extent is everything women do geared towards men or babies?