Al Jazeera English and the United States: The beginning of a beautiful friendship? 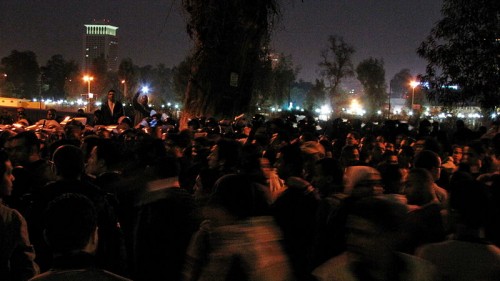 In the midst of escalating events in Egypt – including the recent announcement from President Hosni Mubarak that he will not run for another term, yet will remain in office until fall elections – an interest in bringing Al Jazeera English (launched in 2006) to American television sets has begun in reaction to data that nearly half of the 2,500% increase in online traffic (since 28 January) – which includes video of its television feed –  has been due to American viewership. At present, Al Jazeera English, in broadcast form, is only available in three American cities: Washington, D.C.; Toledo, Ohio; and Burlington, Vermont as well as the national channel of MHz Networks, available through DirecTV, while the rest of American viewers are relegated to its online format. According to Tony Burman, head of North American strategies for Al Jazeera English, this limited arrangement is a direct result of pre-Obama politics and subsequent reluctance from cable companies. He was quoted in a Huffington Post article as stating the following: “There was reluctance from these companies to embark in a direction that would perhaps be opposed by the Bush administration. I think that’s changed. I think if anything the Obama administration has indicated to Al Jazeera that it sees us as part of the solution, not part of the problem.” However, according to a recent (31 January) LA Times article, both Comcast and Time Warner declined to comment on their interest in carrying Al Jazeera English.

Interestingly, these reports come at the same time (1 February) as data from the Pew Research Center for the People & the Press claims that there was, as their headline suggests, “Limited Public Interest in Egyptian Protests” during the last week in January. According to their findings, which were drawn from “telephone interviews conducted between January 27-30 among a sample of 1,007 adults 18 years of age or older living in the continental United States,” there was a disconnect between the amount of media coverage of the protests in Egypt versus “news interest.” While “the media devoted more attention to news about unrest in the Middle East (20% of coverage) than any other story last week,” only 11% of respondents “cite news about protests in Egypt and other Middle Eastern countries as the story they followed most closely last week (after stories covering the aftermath of the Arizona shootings and the State of the Union address). While criticisms could be made of sample size and quantitative research in general, these findings do tell a story about the “general population” to a certain extent, at least those who pick up their phones and participate in a research survey. So what does Pew’s findings have to do with Al Jazeera English and its availability in the United States?

While the inclusion of Al Jazeera English to the repertoire of American programming would, in my opinion, greatly benefit and broaden American (mis)understandings of the Middle East, the Pew Research findings – as merely an example – point to a present interest that is still sidelined by nationally-focused stories and in the opinion of many, influenced by lingering xenophobia. On the other hand however, perhaps the “disinterested” Pew findings, when juxtaposed with the “spike” in American traffic to the Al Jazeera English website (i.e., “interest”), illustrate that Americans are turning away from mainstream television coverage and instead, searching (i.e. active audiences) for information that doesn’t highlight bias, sensationalism, agenda setting, etc. Whether or not American cable companies begin to broadcast Al Jazeera is anyone’s guess – I’m willing to bet that certain groups and shock jocks would put up an interesting fight before it happens. According to Jeff Jarvis, associate professor and director of the interactive journalism program and the new business models for news project at the City University of New York’s Graduate School of Journalism, “It is downright un-American to still refuse to carry it. Vital, world-changing news is occurring in the Middle East and no one–not the xenophobic or celebrity-obsessed or cut-to-the-bone American media–can bring the perspective, insight, and on-the-scene reporting Al Jazeera English can.”

Media, Racism and Islamophobia: The Representation of Islam and Muslims in the Media by Amir Saeed