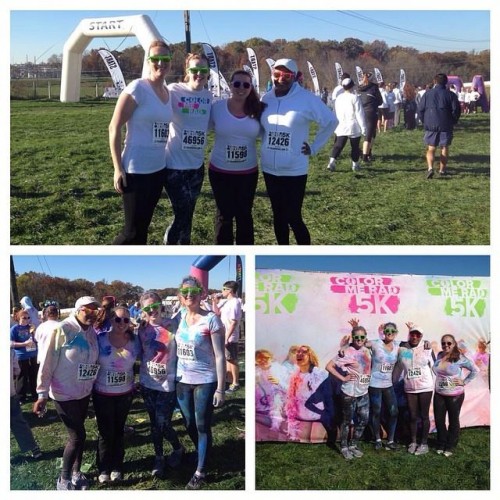 Photo of my Color Me RAD team before and after the race. (I’m second from the left in the top photo). Photo source: mine.

Recently, I ran a 5k called “Color Me Rad” with a group of friends from my department as a chance to just enjoy the southwest Virginia fall and not work for once. I was excited to participate in this race especially because unlike other races that I’ve run, this seemed like I would enjoy myself in a cultural event that I’ve always wanted to experience. As I got to the race, however, I couldn’t help but think sociologically about the cultural appropriation (ironic, as the race was a week prior to Halloween) of the Hindu Festival of Colors, called Holi. Was I culturally experiencing Holi, or was it merely commodified?

Holi is a Hindu religous spring festival primarily observed in India and Nepal. It starts with a Holika bonfire the night before the actual festival, and then there is a free-for-all carnival of colors where people play, chase, and throw colored powders (often chalk or cornstarch) or water (think water balloon fight or water guns). As the festival occurs, the people and streets are delightfully colored to celebrate the end of the winter and the emergence of spring. Sounds fun, no?

I recall one class in college where I learned about cultural appropriation: the professor gave us the example of henna. While it is used in certain celebrations and religious events, he told us that the purpose of henna is to decorate and make a person look beautiful, much like makeup. Then, as henna becomes popular in Western societies, he questioned us, does people getting henna tattoos with more Westernized images, such as a “Tweety Bird,” serve henna’s purpose or is it appropriating certain non-Western cultures? Now, that was a while ago, so my memory might be a little fuzzy, but I believe he had the conclusion that because henna was being used to its purpose, and as long as it is being recognized as a part of culture, then it wasn’t appropriation. You may not agree, but this is just what one person said.

But this color run that I participated in is a whole different level. Allow me to “paint” you a picture: you have easily 1,000 people of all ages dressed head-to-toe in white, each paying anywhere from $25-55 (depending on when you registered) to dance around, do Zumba, run, and leave in powdered hues of blue, pink, green, and yellow. All for the ability to say that I ran a 5k, get messy, and have a new profile picture. Sounds similar to Holi… kind of?

Yet, there is more to this than meets the eye. What about the mere fact that you had to pay quite an exorbitant amount to participate? Color Me Rad claims that a portion of their proceeds go to a local charity, this time being Special Olympics, but how much? That was undisclosed information. But that gets me to my larger point- this cultural event has become commodified and now profits off of a culture to the benefit of some White, Western executives. At no point in the event, and only after some digging on the RAD website, did I find any mention about Holi, and how the run is “loosely based” off of the holiday, excluding the celebratory act of spring and other traditions. Mind you, this is despite the fact that companies are even now forgoing the run and just hosting a “color party.” One unnamed Hindu blogger was quoted, “Come uncultured, leave uncultured – that’s the color-run promise … Honestly, the Color Run™ does absolutely nothing to give credit where it’s due.  And to add insult to injury, they’ve trademarked our tradition.” In an ironic commodification, Holi has become white-washed.

So while I had fun bonding with my cohort, I think we should think twice about participating in this event again. I’ll just go bowling instead. Probably better for my knees anyways.

Kingswood, Mary. 2014. “Think Before You Run: Cultural Appropriation and The Color Run.” The Geneva Voice. http://www.genevavoice.com/think-before-you-run-cultural-appropriation-and-the-color-run/