Battle Hymn of the Steriotype Mother

I’ve been meaning to do a blog on Battle Hymn of the Tiger Mother (BHTM) by Amy Chua for the past year, but to be honest I was hoping to stay above the fray.  Alas, time has come to add my two cents into the blogosphere…. 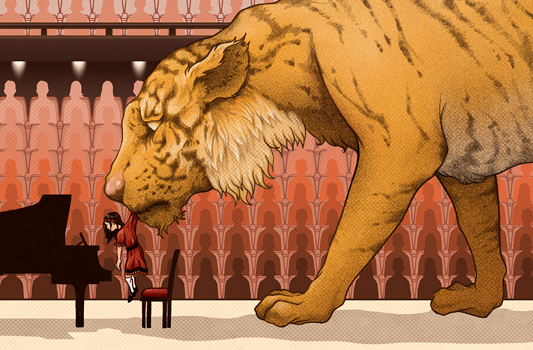 BHTM is “a satirical memoir” (p. 234) by Yale law professor Amy Chua, which chronicles her adventures in raising her half-Jewish, half-Chinese daughters in “the traditional Chinese way.”  According to Chua, Chinese mothers raise successful children by “[forbidding children] to attend a sleepover, have a playdate, be in a school play, complain about not being in a school play… get any grade less than an A, not be the #1 student in every subject except gym and drama, play any instrument other than the piano or violin, not play the piano or Violin” (p.3-4)

To put it in sociological terms, Chua’s mode of Chinese mothering is like Lareau’s concerted cultivation taken to the tenth power.  Lareau coined the term concerted cultivation to describe the ways in which middle class parents raise their children to succeed in white collar jobs. BHTM, morosely, speaks of efforts to create an environment where the ONLY option for children is success.  Failure is met with a combination of emotional punishment (“I don’t want this [birthday card], I want a better one.  One that you’ve put some thought and effort into.” p. 103) and terroristic threatening: “If the next time’s not PERFECT, I’m going to TAKE ALL YOUR STUFFED ANIMALS AND BURN THEM!” (p. 28, emphasis in original)

Whereas Lareau concludes that class has more to do with child rearing than race, Chua attributes the difference in Chinese and Western parenting to ethnic culture.  By making sleepovers, drama classes, and non-A grades taboo, Chua is attempting to fabricate a culture of intelligence—a culture where academic dominance and cultural prowess is the norm and meritocracy is deviant.  This is much like Lewis’ culture of poverty theory.

The false dichotomy (Western v. Chinese parenting) within the book must be deconstructed in order for this text to be a useful sociological reading.  BHTM is an entertaining read that, with a critical lens, can be a foil for lessons on social stratification.

The Tiger Mom by Yuta Onada.