Questionable at Best: The Death Penalty in America

On August 7th, 2012, the state of Texas executed 54-year-old Marvin Wilson. Wilson was sentenced to death after being convicted of murdering police informant Jerry Williams, 21, in 1992 in Beaumont, TX. The murder occurred several days after Wilson had been arrested for possession of cocaine. Free on bond and believing that Williams had told police about the drugs, Wilson and another man beat Williams outside of a convenience store before abducting and shooting him at close range. Williams’ body was found the following day on the side of a road.

Since his conviction for the murder, Wilson’s attorneys tried to have their client removed from death row. Arguing that Wilson was mentally impaired, the legal team argued that their client’s language and math skills were equivalent to that of a child in elementary school. They further noted that a 2004 psychological test determined that Wilson had an IQ of only 61 while the generally accepted minimum score for legal competency is 70. After failing to receive help from lower courts or state attorneys, Wilson’s lawyers asked the Supreme Court to issue a stay of execution. They cited a 2002 ruling by the Court (Atkins v. Virginia) which forbids states from executing the mentally impaired. Despite these efforts, however, the request for a stay of execution was denied. And, as a result, Wilson’s execution continued as planned.

In the days following Wilson’s death, there remains a feeling that his case touched on more than just the importance of determining whether or not a death row inmate is mentally impaired. This is because even in instances when competency isn’t an issue, the existence of capital punishment brings up questions regarding the ethics and the goals of sentencing a person to death. As Beckett and Sasson (2003) have noted, some of these issues include the reality that the death penalty has not been proven to deter crime, the fact that it continues to be administered in a discriminatory manner, and the simple truth that it is not any more cost effective than it is to sentence an offender to life in prison.

In regards to deterrence, proponents of the death penalty often argue that capital punishment is an invaluable tool of the criminal justice system because of its capability to deter serious crime. As researchers such as Donohue and Wolfers (2006) point out, however, a growing body of evidence strongly suggests that the threat of lethal punishment does virtually nothing to deter people from committing murder. The fact that violent crimes such as murder are often illogical, expressive acts (Chambliss 1975) and the finding that the execution rate is not correlated with the felony capital murder rate (e.g., Peterson and Bailey 1991) provides important evidence to suggest that the death penalty is not an effective deterrent.

As for discriminatory practices, it has been found that demographic characteristics often help to determine whether a capital offense defendant actually receives the death penalty. Keil and Vito (1995) found, for instance, that prosecutors are not only more likely to ask for the death penalty in cases where black offenders murdered white victims, but that juries are also more likely to recommend that defendants in such cases receive the death penalty. If the victim is a white female, it has been found that offenders eligible for capital punishment are especially likely to be sentenced to death (Williams and Holcomb 2004). 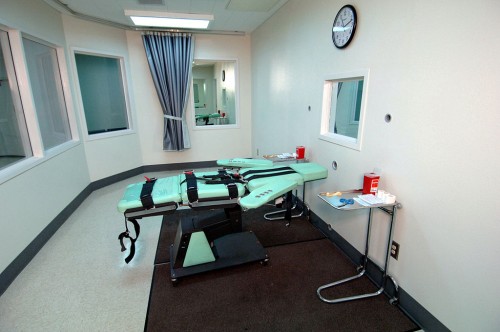 Yet, in spite of such research, the death penalty continues to be a reality in the U.S. legal system. Add in the horrifying potential of putting an innocent person to death, and it becomes all the more apparent that capital punishment is a questionable policy at best. Still, though, 33 U.S. states continue to retain the power to put offenders of capital crimes to death.  And of these states, Texas has the country’s second highest execution rate per capita. Texas also happens to be the state where a potentially mentally impaired man named Marvin Wilson was convicted of capital murder, was unable to appeal his sentence, and was pronounced dead at 6:27 p.m. on August 7th, 2012, 14 minutes after the lethal drugs began to enter his veins.