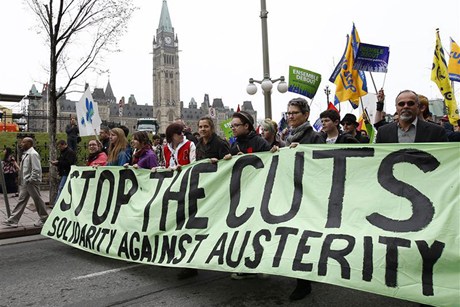 After the French elected Socialist Francois Hollande in a rebuke of austerity policies gripping Europe, news headlines issued reports of worried markets.  The fear, among some, is that the new president would act in such a way, or more precisely that the public was acting in such a way that, would spook markets.  Some economists, most notably Princeton professor and Nobel prize winner Paul Krugman, have argued against austerity in favor of government stimulus to push economic demand and growth.  Krugman has made frequent reference to the Great Depression-era economic theories of John Maynard Keynes.  While Keynes is important here, a less noted theorist – Karl Polanyi, is, in my view, more apt to the particular electoral impulses unfolding across Europe.

The austerity project and its ties to the Euro, is an attempt, like the Gold Standard that Karl Polanyi wrote about in 1944, to disembed the market from society.  Polanyi argued that the economy cannot be disconnected from society and that such attempts were destined to fail. He noted that an economy is dependent on social, historical, and political relationships.  Such relationships are not simply impediments to the free market but instead the foundation upon which such markets rest.  Polanyi argued that the disembedded economy is a utopian ideal, which could not exist for any “length of time without annihilating the human and natural substance of society.  It would have physically destroyed man and transformed his surroundings into a wilderness.”

Polanyi, however, didn’t believe it would come to that.  Instead, attempts to disembed the market from society would inevitably fail as the public sought to reembed the market.  Polanyi called this process the “double-movement.”

The crux of Polanyi’s argument deals with commodification.  A commodity is an item produced for sale.  In a market economy, commodities should operate according to supply and demand.  As supply increases, prices drops which then causes supply to drop eventually creating a equilibrium.  In this view, the price mechanism, rather than state planning, will most efficiently regulate the price and availability of goods and services.  However, this tidy economic model includes economic inputs that are not real commodities – particularly land, labor, and money.  Land is just subdivided nature which as the environmental movement has long pointed out will cease to function in its life-sustaining capacity if treated as a commodity.  Money is only a means of exchange and not a commodity at all.  And perhaps most importantly, labor is simply another word for the activity of human beings who can (and will) refuse to be treated as commodities.

Neoliberal economics, of which the austerity project relies upon, begins with the false assumption that land, labor and money can be treated as commodities.  Polanyi makes two arguments against this assumption.  First, it is morally wrong to treat nature and people as things for sale and secondly, that it is impossible.  Society will always manage these fictitious commodities.  Therefore non-market forces (like democracy for example) will embed the market.

Proponents of Europe’s attempts to run society as an adjunct of the market – by slashing wages, laying off workers, and cutting deficits to balance budgets and please investors – posit that negative effects are only short term.  But people must eat, clothe themselves, and house themselves in the short term.  As Keynes once remarked, in the long run, we are all dead.  The cost of adjustments in terms of falling wages and high unemployment are simply too high.  The public will not bear them.  The laissez-faire market makes demands on ordinary people that are not sustainable.

Polanyi saw two impulses stemming from this reality.  One is to curtail the market through democracy or what Polanyi called socialism.  The other is to sacrifice democracy for the market or what Polanyi called the fascist impulse (and what newspapers like to call technocratic management of the economy).  Of course, technocratic management or libertarian economics is not fascism and Polanyi did not say it was.  What he argued was that fascism is the only way to maintain those policies.

While I have faith that Europe will avoid fascism, and if recent reports are any indication, begin moving toward reembedding the market.  My main point here is not to issue warnings or make predictions.  Instead, I wish to point out, as Polanyi did over 50 years ago, that economic decisions cannot be made without regard to society.  While Polanyi was not necessarily a sociologist, he offers a useful corrective to the belief that economic theory alone can fully explain the economy and society.  The crisis in Europe, and in the United States, is a reminder that society matters.  The recent electoral turmoil should remind us that the study of markets is incomplete without the study of human groups and sets of social relationships – or in other words, sociology.

Velez-Velez – Anti-American Resistance in Latin America: An Issue of Sovereignty, Militarization, and Neoliberalism