Whose Voice is it Anyway? Gender and Power in Ventriloquism 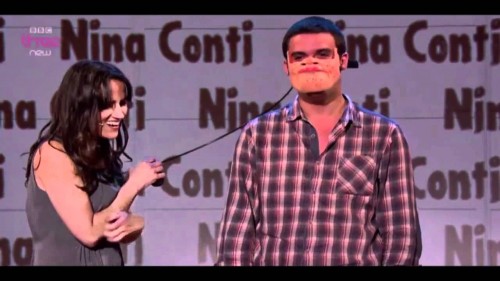 Last week I went with a friend of mine to see a performance by comedian and ventriloquist Nina Conti. I really cannot recommend her enough, and as with all her performances I was in stitches. Whilst I could easily fill this post waxing lyrical at her talents, there is (as always) as sociological element to her work. Firstly, elements of her performance demonstrate how displays of emotion have become cultural currency, particularly for women. Secondly, it engenders interesting questions regarding power dynamics in interaction; there is a contradiction between her ‘powerful’ role as leader of the interaction, and the power-less position of being female.

It has been noted both academically and in the media that comedy is gendered, most noteably with the lack of female comedians in the public eye. Explanations for this are often lazy or essentialist or both; perhaps, for example, women aren’t funny? Ignoring the so-called scientific or evolutionary explanations (most of which can be debunked), it is perhaps a truism that women’s humour tends to be female-focused. Female comedians often make jokes relating to that which is feminine, feminist or women-centred, that is assumed to appeal only to women.

Whilst this explanation is also limiting in scope, it is difficult to avoid the stereotype that women are far more likely and more comfortable in discussing emotions and describe personal experiences. This is evident in Nina’s performance: her primary sidekick ‘Monk’, a puppet monkey that she voices, acts as a third character and facilitates expressions of self-doubt and self-deprecation. At times Monk will make reference to her not being funny if something goes wrong with her act, and the audience find themselves laughing at her expense before remembering that she is saying them herself. It works beautifully: it is very funny and, at times, very moving. This is even more evident inConti’s documentary ‘Her Master’s Voice’, a self-reflective documentary that contains amongst others, a particularly emotional scene in which Monk (aka Nina’s right hand) asks if it is a coincidence that he came into her life when she had recently had an abortion. This is an example of the emotionalisation of society, or what Frank Furedi calls therapy culture, where disclosure of emotions is viewed as a source of strength and there is an incitement to public emotional displays.  In Conti’s work humour is used as a way of dealing with pain: much like Susan Miller’s ‘My Left Breast’ or Eve Ensler’s “The Vagina Monologues”, the stage provides a space to express experiences of pain or oppression that is simultaneously public whilst being a self-made ‘safe space’.

The relationship between a performer and his or her audience is fundamentally, one of power. In (yet another) article about the dearth of female comedians, Michele A’Court highlights a key way in which society and culture is gendered with regards to comedy. In offering explanations for women’s absence in comedy she states:

“The comic is the most powerful person in the room – the one with all the ideas and the opinions and the microphone. Women are socialised…to facilitate power, rather than be the one with the power.”

It is this imbalance of power that was so striking about Conti’s performance. As A’Court implies above, whilst there is an intense vulnerability to performing stand up, by getting up on the stage with the microphone and the opinion the comedian is in control of the interaction. Whilst Conti does not use her opinions as part of the act, her control over the interaction is at times almost problematic. One of her most ingenious acts involves a ventriloquist mask, enabling her to use a member of the audience as a living, breathing (and reacting) puppet (watch the video here). Theatrically it is genius; she has a conversation with a male audience member but does both halves of the conversation. In this way she has complete control over him – putting words in his mouth and thereby being able to control his actions. He is ‘desperate to show the audience his dance moves’, and even though the ‘real’ human under the mask is embarrassed and reluctant to perform said dance moves. Nina even brings attention to it, saying, “Are you sure? Your body language says you don’t want to”, and then making him say, “No, no, I want to!”. She removes any notion of consent the audience member gives, and makes that into the joke. I am in no way criticising this directly as I think it is very cleverly and well done, and she does genuinely seem concerned that they may not be okay with it. What it raised for my friend and I was a simple question: would we find it funny if she was an (old) man, rather than a small, slender, white woman? Her inherently power-less position makes it acceptable for her to act in a way that is dominating and powerful.

My friend and I continue to debate this. Is it subversive of patriarchal norms? Is it challenging the culture surrounding female comedians? Or is it problematic for its lack of gender translatability?

Boal, A. (2006) The Aesthetics of the Oppressed, London: Routledge.