UKIP and 'The Wrong Type of Immigrant' 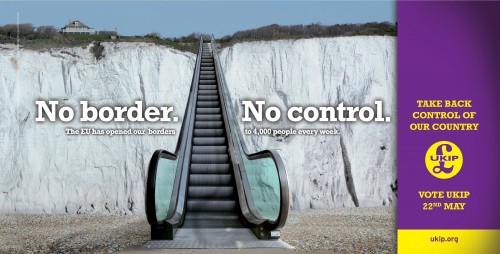 It remains to be seen if a surge in support for the right-wing nationalist UK Independence Party fulfils its mainstream media billing “as a seismic shift in the political landscape”. Voter turnout was low; around 34%, and, ironically, given UKIP’s obsession with Europe’s threat to Britain’s legislative sovereignty, there were few domestic policy issues at stake. UKIP has little meaningful to say about, for example, schools or the health service. Its self-defining agenda is to prevent immigration.

However, this agenda is problematic because within UKIP’s worldview not all immigrants are the same. We live in a globalised economy and therefore, in the UK we have, among others, Americans, Australians, and Germans working in every employment sector from banking to personal training all of whom are invisible to UKIP. In a recent radio interview UKIP’s leader, Nigel Farage, whose wife incidentally is German, was challenged on his party’s construction of the ‘wrong type of immigrant’. When he was asked what’s the difference between a German and Hungarian immigrant he blustered and fumbled before saying “Well, you know”. In context, this statement channels discourses around Slavic nations and Romanians which are sustained by mendacious stereotypes of swarthy criminal gangs and itinerants who, despite the absence of evidence, are said to be cynically exploiting our free health care system.

Sociology provides a rich tradition of scholarship that helps us understand what’s going on here. Foucault shows us how voices, privileged by access to public service broadcasters, are able to define the terms of the debate and produce socially constructed ‘truths’ about problems immigration cause. Phrases such as “legitimate concerns” involve highly codified, defensive language that’s calibrated to deflect accusations of prejudice. Edward Said’s Orientalism is the seminal text on the discursive othering of ethnic differences that such truths create. Anderson (2005) draws our attention to the power of imagined communities; UKIP supporters identitfy with strangers, dispersed across the UK who they imagine share their values and affinities. Although strictly a social psychologist, Tajfel (1974) helps explain how UKIP supporters use this ‘knowledge’ of a wider community to draw feelings of self-worth from belonging to an ‘in-group’ that seeks to exclude members of ‘out-groups’. The in-groupers then feel aggrieved that scarce jobs and resources such as housing that they feel belong to deserving members of the in-group are being distributed to ‘undeserving’ foreigners.

Around 82% of UKIP voters think the country is a worse place to grow up than it was 30-40 years ago (and in 1974, there was a three-day week, power cuts, endless strikes and stagflation). The sociology of nostalgia tells us:

“Modernity is the experience of life lived in fragments, with the swift pace of change and the problems of semiotic overload contributing to the fragmentation of experience and our ability to assimilate it into an ongoing life-process”. Pickering and Kneightly (2006)

A reinvention of the past into a fantasy, where everyone a lived within the bucolic bosom of the in–group, mitigates the ontological anxieties of the present.

The fragility and hypocrisy of in-group/out-group dynamics is best embodied in a pithy question from a Scottish comedian who is notorious for transgressing boundaries of taste; Frankie Boyle. To paraphrase him, he asked on Twitter would Nigel Farage or any UKIP supporter prefer to live next door to a Romanian doctor or a British born convicted sex-offender. Nevertheless, The British Social Attitudes Survey shows prejudice is on the rise in the UK and ultimately this is a failure of progressive political leaders with access to the media to provide a passionate and convincing counter-discourse that eulogises the benefits of diversity and tolerance.