At the 2018 British Sociological Association Conference, we had the pleasure of speaking to sociology researchers across the breadth of the discipline, and at all career levels. Eva Cheuk-Yin Li has just completed her PhD on gender and sexuality studies and pop culture in East Asia, at King’s College London, and spoke to Sociology Lens about her research into gender performance in the context of pop culture and fandom in Chinese societies.

Tell us about your research background

I am trained as a sociologist specialising in media and culture and I have always been interested in the intersection of gender, sexuality, and media in the East Asian and transnational contexts. My MPhil thesis was about the fandom of a queer singer, Denise Ho, in Hong Kong; I explored the multilayered productivity of her fans and the wider sociocultural contexts in which fannish practice, creativity, and resistance are embedded.

In 2012, I moved to the UK to embark on my PhD research within a film studies department, which may be considered by some as unusual. Undertaking a social research in a humanities department has prompted me to further reflect on my theoretical orientation and epistemological position. This experience has encouraged me to engage in the production of interdisciplinary knowledge. So, my career has been from sociology to more interdisciplinary gender, media and cultural studies.

What is the focus of your PhD?

My PhD is about the lived experience of ‘zhongxing’ among Chinese women. Zhongxing is a mediated and gendered phenomenon referring to the mainstreaming of women who perform non-normative gender, regardless of their sexual orientations. The term can mean ‘neutral’ in certain contexts and in my earlier writing, I adopted ‘neutral gender/sex’ as its literal translation. Recently, I consider that ‘middle gender/sex’ would be a more more literal translation, since it implies such performance of gender being situated in-between a binary system that is constantly contested. In fact, translation is a critical site of reflexive knowledge production and it is an integral part of my research.

I argue that zhongxing should not be directly translated into existing English-language concepts because relevant concepts such as androgyny, queer, and female masculinity cannot fully capture its peculiarity, and hence zhongxing should be studied in its own right, for its lexical ambiguity, mundanity, and depoliticised overtones (a preliminary version of this theorisation has been published in Li (2015), listed in the suggested references at the end). It should also be noted that although the same written characters are used, the romanisation differs across China, Hong Kong, and Taiwan.

I focused on the everyday practice of zhongxing among Chinese women, both heterosexual- and non-heterosexual identified. Instead of seeing it as an identity position, I argue that zhongxing is a practice of redoing gender, which involves nuanced and ongoing negotiations between gender boundaries and sexual norms that define womanhood and normality in the respective locale. And to retain and respond to the ambiguity of zhongxing, I employed a ‘method of ambiguity’ to recruit participants for interviews (a short discussion can be found in Li (2018) listed below) and conducted discourse analysis of Internet discussion. 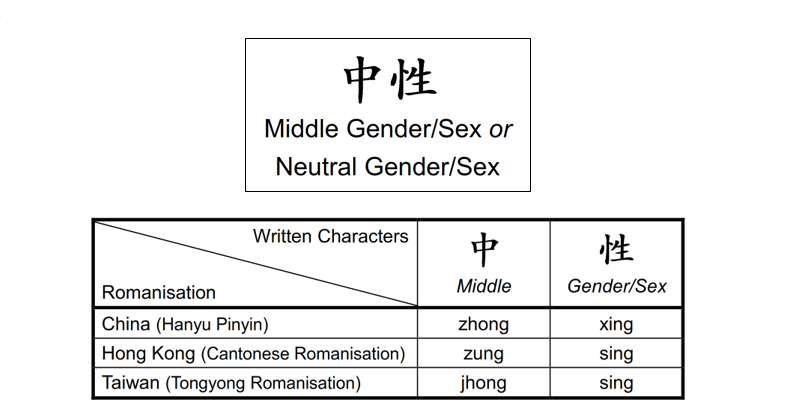 How did the term zhongxing (middle/neutral gender) become popularized?

In fact, the ‘origin’ of the term can be another research project, but if we look at popular culture in Chinese-speaking societies in the last few decades, we can map two major discourses of zhongxing, i.e. desirable and undesirable. The term was believed to be first used by the Taiwanese music industry in the 1980s to market female singers who did not perform normative femininity; such usage has an undertone of lesbianism. Then, in the 1990s, it was Hong Kong popular culture that proliferated this term through lifestyle magazines and fashion communication (as the Chinese translation of ‘unisex’ fashion) establishing zhongxing as being authentic in personality, clean, decent, and hence desirable.

Towards the new millennium, there was a sudden emergence of ‘tomboyish’ singers who have attracted considerable local fandom and support in China, Hong Kong, and Taiwan respectively. Most of them are marketed as and described by the media to be zhongxing, and their sexuality remains enigmatic. These singers, such as Li Yuchun (Chris Lee) (see below) and Zhou Bichang in China, Denise Ho in Hong Kong (see above), and Ella of S.H.E and Jing Chang in Taiwan, have helped proliferate the term zhongxing and opened up new spaces for young women to negotiate their gender and sexuality. And of course, transnational popular culture from Western Europe and North America, as well as Japan and Korea has played a part in this process. A more detailed discussion tracing how the term became popularised will be published in an encyclopedia on global LGBTQ history (Li, forthcoming). 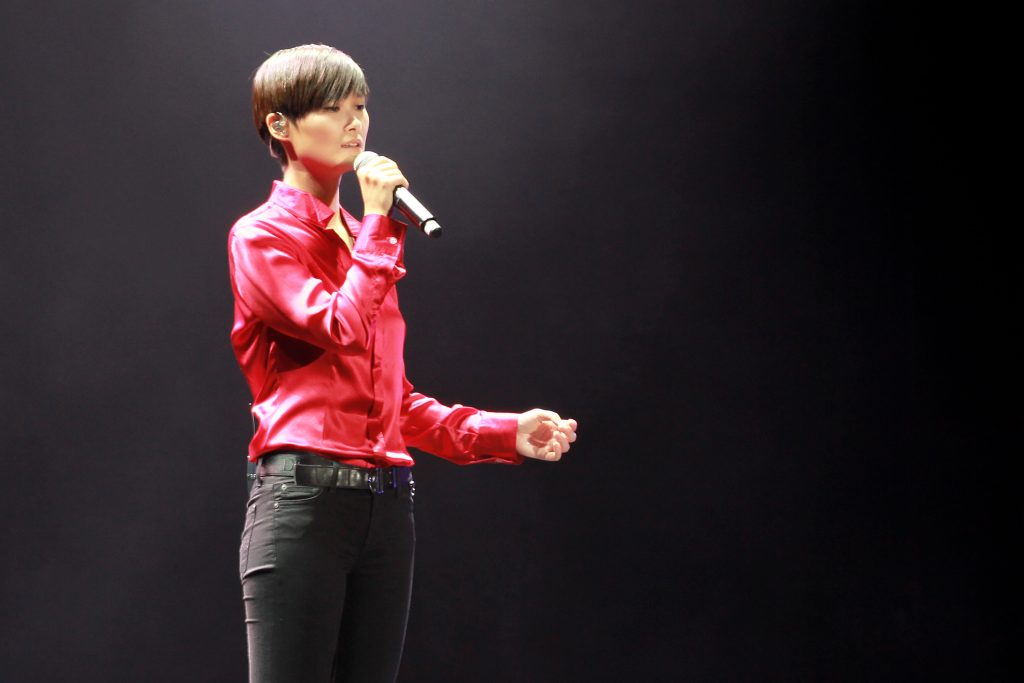 Is this movement seen as ‘subversive’ in these East Asian countries?

This is quite complicated. This phenomenon has triggered moral panics in their respective societies throughout the 2000s, for example, critics in China worried about young girls ‘confused’ about their gender and called for ‘proper’ gender education to reinforce binary understanding of gender

Indeed, the ambiguity of the term and the phenomenon itself cast a big question about if this is subversive or if this is acceptable, at least in the contexts of China and Hong Kong. I found my participants tacitly maneuvered between being subversive and being ‘normal’, and this constitutes a very integral part of their everyday practice of gender. Because the term is ambiguous, it was seen as a non-offensive and safe term to hint their ‘difference’. In Chinese societies, women who do not perform the normative gender are given derogatory names such as nanrenpo – ‘mannish women’, in Hanyu Pinyin – but the phenomenon of zhongxing has mainstreamed, visualised, and legitimatised such (precarious) crossing of gender boundaries. It opens up new spaces for women to expand their gender repertoires and even allows a certain degree of playfulness.

There is a similar phenomenon in Taiwan as well (Hu 2017). Speaking on the broader East Asian context, I notice that there are also female idols and performers in Japan and Korea who are respectively described as chusei and jungseong, and due to historical Chinese imperialism and translation quirks, the Japanese kanji and Korean hanja of these two terms share the same written characters with zhongxing. Although the national and local contexts are distinctive from the Chinese-speaking societies that I studied in my PhD, the performance of ambiguous gender by women in East Asian popular culture and its implication on women’s biography and negotiation of gendered selfhood is interesting, and the potentiality (as well as limitation) of this movement is worth exploring.

What are the differences in way it interacts with everyday life?

There are several notable differences. For example, there are subtle yet intriguing differences in the lived experience of zhongxing between women in urban China and Hong Kong. Generally, women in China found it more pressurised and difficult to perform zhongxing in everyday life. Due to the colonial history and earlier history of financialisation in Hong Kong, several prototypes of gender non-conforming/zhongxing women, have been mainstreamed, commercialised, and hence more ‘tolerated’. However, the pressure of getting married and giving birth remains enormous in China, which directly exerts pressure and leads to the self-disciplining of women’s embodiment and gender expression. I have also found different patterns in the experiences of heterosexual and queer women. Moreover, intersectionality matters. Participants who are better educated tend to embrace zhongxing to challenge gender norms, while those with less resources and access to gender/sexual knowledge tends to struggle more with the binary system of gender.

What will you be working on next?

Besides continuing to research on the everyday practice of gender among Chinese women, I am also interested in researching the online presentation of self of LGBTQ youth, who may not necessarily identify with particular sexual identities. I think this trend suggests a somewhat more ambivalent and flexible way of being and becoming, as well as sense of belonging. I am also also interested in furthering my research on media and culture in East Asia, especially on the production and consumption of queer media. When there is limited institutional recognition of LGBTQ rights, popular culture and fandom become an important means of negotiating identity, sexual citizenship, and sense of communities. There is an emerging interdisciplinary scholarship on these issues over the last two decades, and I look forward to joining and contributing to these intellectual dialogues.

Publications mentioned in the interview