Who invented the World Wide Web and the Internet? 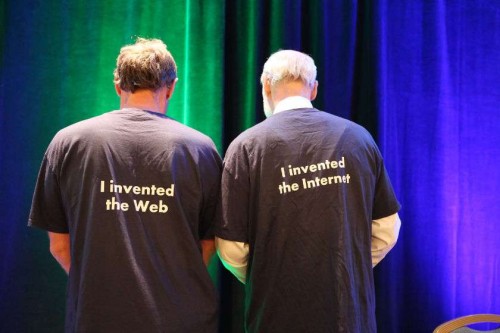 When ‘A’ claims they invented ‘X’ as a sociologist of technology my default position is often to respond with scepticism: as I did when I saw this picture above. I understand why Sir Tim Berners-Lee and Vint Cerf would claim they invented the World Wide Web and the Internet respectively. The status of inventor gives each of them a public plinth from which they can discuss how they think digital technology should be mobilised for the benefit of society. Examining their claims to fame is not an attempt to debunk these men’s status: it’s an exercise to show that technology never emerges in isolation. The sociology of technology tells us the invention and development of the Web and the Internet, like all technology, has to be understood within a broader social context that involves networks of people and technology as well as cultural values. I can’t do this statement justice here. By applying this logic to these t-shirts in the picture above I can, however, begin to show the value of the sociology of technology.

First of all, Vint Cerf didn’t invent the Internet. He headed a team that invented the TCP/IP communication protocol. By breaking data into packets that can be addressed, transmitted, routed, and distributed across wide area networks then reassembled at the recipient’s end; this protocol enables data to travel on the Internet. Furthermore, the Internet would not have been possible without a series of inventions that preceded it. Others could equally lay claim to inventing a technology that’s crucial to the Internet including an unsung Welshman called Donald Davies. The Internet’s emergence also depended on state funding. The Internet’s precursor, the Advanced Research Projects Agency Network (ARPANET), emerged in the late 1960s from collaborations between the US Defence Department and universities.

Similarly, the World Wide Web was foreshadowed. There were previous attempts to link libraries of documents such as Memex. And, an analogous hypertext system was envisioned by Ted Nelson. Tim Berners-Lee wrote the HTTP protocol that allowed documents to be shared on the Internet via hyperlinks. Crucially, this too relied on state funding. Berners-Lee was working at CERN at the time which is financed by the European Union. And, in one of the most retrospectively quixotic gestures in history; he gave away this innovation to the academic community and then the rest of the world.

The Internet and World Wide Web are products of a culture that values collaborative, state-funded research that’s shared for the benefit of humanity. We took this technology; TCP/IP and HTTP and used the Internet and created the Web. To demonstrate the principles of the Web, Berners Lee needed only two machines; a client and a server. Take a look at this representation of the Internet and Web emerging in real-time. This is what we’ve done with this technology.