The Daniel Pearl Freedom of the Press Act: A positive step in an ambiguous direction 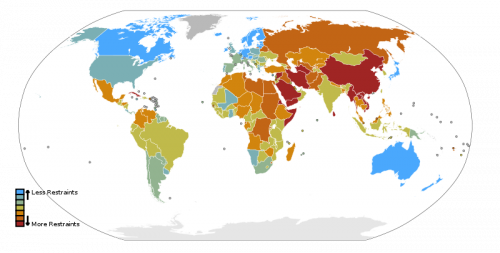 In an effort to combine press freedom and human rights, President Obama signed new legislation, titled the Daniel Pearl Freedom of the Press Act, which would require, according to The New York Times: “ … the State Department to expand its scrutiny of news media restrictions and intimidation as part of its annual review of human rights in each country. Among other considerations, the department will be required to determine whether foreign governments participate in or condone violations of press freedom.” The Wall Street Journal quoted President Obama as stating (during the signing ceremony): “Oftentimes without this kind of attention, countries and governments feel that they can operate against the press with impunity. And we want to send a message that they can’t.” Further, UPI quoted Obama with the following: “All around the world there are enormously courageous journalists and bloggers who, at great risk to themselves, are trying to shine a light on the critical issues that the people of their country face; who are the front lines against tyranny and oppression.”

While this new legislation, named after a reporter for The Wall Street Journal who was killed by Pakistani terrorists in 2002, does successfully call attention to the human rights element within journalism, the “report” that the State Department would “begin” detailing is actually already in effect. Among many organizations that track press freedom around the world, the Committee to Protect Journalists and Reporters without Borders are two that already rank countries according to press freedom and human rights violations. In fact, according to their website, CPJ “is a an independent, nonprofit organization founded in 1981. We promote press freedom worldwide by defending the rights of journalists to report the news without fear of reprisal.” It would appear that this new legislation would then include an alliance between the State Department and these successful organizations. Unfortunately, this doesn’t appear to be the case: The Wall Street Journal reports that although there was a provision in the Act to give grants to independent media (which may have included these nonprofit organizations), it was removed in the Senate. In the end, while this new legislation does bring national attention to the risks that journalists take while covering stories in conflict zones (or non-conflict zones), many questions are left: How will this “list” from the State Department force other countries to change? How will this information depart from the facts we already receive from CPJ and Reporters without Borders? What about the fact that most of these journalists are independent bloggers who are risking their lives due to organizational/structural/financial issues within the industry?

Studying the Sociology of Journalists: The Journalistic Field and the News World