For the Love of the Game: Collective Memory and the Fight for Gender Equality in Sports 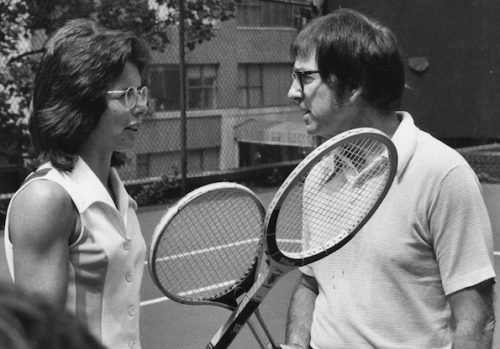 ESPN’s recent exposé, suggesting the match was rigged has resulted in passionate responses from journalists, sports commentators, feminist scholars, and tennis fans across the globe. The ESPN feature was based on statements from Hal Shaw, a former assistant golf instructor, who claimed to have overheard mafia bosses discussing Riggs’ plan to tank the match against King to settle a $100,000 debt.

King quickly issued a statement that the allegations were ridiculous.  Sportscaster Jim Grey stated that although it was certainly plausible and possible that Shaw overheard a discussion about the upcoming match, there is no credible evidence that Riggs threw the match or ever owed money to the mafia.  Riggs, who died in 1995, had always denied that he deliberately lost the match.  And Riggs’ son Larry suggested if the match had been thrown, his father would have almost certainly contracted a rematch clause where he could double the profit.  However, the new allegations have resurrected reports of Riggs’ unusual lack of preparation prior to the match and once again King’s 1973 win has come under suspicion.

Amid the heated debates, Slate contributor Amanda Marcotte and Kate Dries at Jezebel have made persuasive arguments concerning arbitrary nature of the recent allegations.  Dries astutely pointed out that regardless of “The Battle of the Sexes” Billie Jean King will always be known as one of the most influential figures in sports, the LGBT community, and women’s history in general.  She asks, “Who cares if Bobby Riggs let Billie Jean King win?”

I agree with Dries; regardless of the win, King remains an exemplar among women in athletics.  But I was left wondering, if the winner does not matter then why has this become such a heated story?  I think part of the answer is that allegations suggesting “The Battle of the Sexes” was rigged challenges our collective memory of the accomplishments of second wave feminism and the historical progression of women’s athletics.

On the surface, the idea of a collective memory appears to be an oxymoron.  In modern societies, memory is often thought to be an individual experience.  However, all individual remembering occurs within the context of social structures and in response to societal cues. Maurice Halbwachs argued, “It is in society that people normally acquire their memories.  It is also in society that they recall, recognize, and localize their memories” (1992:38).  He suggested that although what individuals remember is uniquely personal, these memories are determined by group membership and external social constructs (Olick, Vinitzky-Seroussin, and Levy 2011:21).  Thus, it is not surprising that groups share memories and associate various levels of significance with these memories.

The early 1970s were historically and emotionally significant years for women’s equality. The Women’s Liberation Movement was moving across the United States in full force.  In 1972, Gloria Steinem delivered the “Address to the Women of America” and Title IX was signed into law.  On January 22nd, 1973, the Supreme Court of the United States decided that the 14th Amendment extended to a woman’s right to an abortion in the landmark case Roe v. Wade.  And nine months later Billie Jean won “The Battle of the Sexes.” Today, numerous women and men recall this period as an example of the process of social change and the effectiveness of social movements, thus, creating a collective memory associating certain events during this period with the victories of second wave feminism.

Michael Messner has argued that events, including the Riggs v. King match, have lead to the creation of a twenty-first century feminist fable.  He writes, “Once upon a time, girls were believed to be naturally unsuited for sports… But in the early 1970s, Billie Jean King beat Bobby Riggs in the Battle of the Sexes; girls sued Little League… and Title IX was passed… This opened the floodgates to girls’ athletic participation…Today, though equity is not yet achieved, sport is no longer just for boys and men” (2011:152).

Although I think Messner’s language, specifically the phrase “feminist fable,” is problematic on numerous levels, I agree that the events he outlined have contributed to a simplified collective memory related to the progressive inclusion of women and girls in recreational and professional athletics.  For many, the memory of Billie Jean’s win over Bobby Riggs is intrinsically linked to women’s visibility in athletics and “The Battle of the Sexes” has become a cultural symbol of the progression of women in professional and non-professional sports and to a larger extent second wave feminism in general.

This memory is overly simplified, which is problematic because it is so fragile, as has been exemplified in the recent allegations that “The Battle of the Sexes” was rigged.  Historic events often have multiple layers and these layers are not always immediately apparent.