Connecting the Dots: The Politics of Race in Big Time Football's 2013 Offseason

Football season is upon us, and there are plenty of reasons why this moment in big time football is very intriguing from a sociological perspective. More specifically, most of the major offseason storylines of both professional and collegiate football tell us much about the racial politics in big time football and the negotiations of race and sports in the media.

Although the league is as popular as ever and predominantly features Black athletes, there are indications that latent racialized stories both inform how the sport is covered by parts of the media and might influence the league’s reactions to some perceived problems. In response to the murder charges against Patriots player Aaron Hernandez, for instance, parts of the media were quick to assert that NFL football was experiencing a crime wave – without any evidence showing that crime amongst NFL players was higher than in the general population or had risen over the last couple of years. Commentators characterized the NFL as a ‘thug league’ and the NFL front office itself reportedly considered bringing in so-called experts in order to investigate whether their players’ tattoos suggested gang affiliations. These racially charged commentaries and proposed ‘solutions’ can be read as paralleling what David Leonard in his work on professional basketball called the NBA’s “Assault on Blackness”: The attempts of a league to dissociate itself from cultural markers associated with young African American men – tattoos, hip hop inspired clothing etc. – while at the same time cashing in on a predominantly Black labor force. 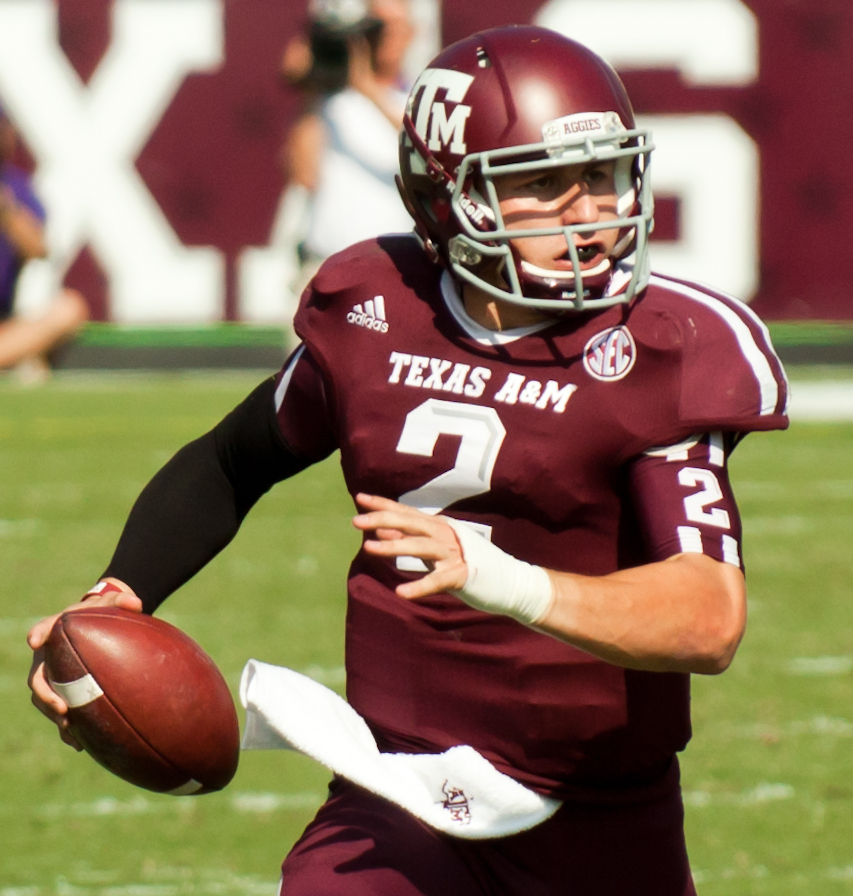 A quite different – yet complementary – story of race unfolded recently around college quarterback Johnny Manziel who has been accused of signing hundreds of autographs for a memorabilia trader in return for payment; an offense in violation of the NCAA’s amateurism rules (which are in itself, no doubt, highly problematic). Interestingly, at least some in the media took Manziel’s side, arguing that his violation was an act of civil disobedience against a system unfair towards collegiate athletes – rather than an attempt to make some money on the side. Interestingly, however, the sympathy towards Manziel and the heroism bestowed unto him – one article even explicitly compared him to Rosa Parks – had been absent in earlier cases of alleged transgressions by Black college players. The same author who tried to convince us that Manziel is a civil rights icon, for instance, applauded the NFL for banning African American quarterback Terrelle Pryor for multiple games in light of similar allegations and called him a “college football terrorist”. The racial message here is clear: A white quarterback from a wealthy family who violates the rules is ‘taking a stand’ and has every right to do this in order to receive a fair payment for his labor or at most is an immature kid making stupid decisions, whereas Black athletes are breaking the rules for egoistical motives when they should be grateful to even be receiving a college education.

This story of Black athletes being suspected of bad character and criminality – clearly a translation of more general stereotypes towards African American men into sports terms – is one that has also been documented for Black football player’s experiences of the NFL’s business conduct. In addition to studies consistently showing that Black quarterbacks continue to be described primarily in terms of superior athleticism and lack in mental preparation for the position – while white signal callers are more likely to be lauded for their mental prowess –  other research addresses the issue of racial profiling in the work place that is the NFL. A study by Dufur and Feinberg found that Black NFL prospects reported how racialized stereotypes impacted their job interviews with NFL teams. These African American men were asked about their criminal backgrounds – with teams even talked to their pee wee coaches – despite them not having a record, they were questioned whether they had fathered any children despite having reported they were single, and they were asked about obligations towards extended families. At the same, white prospects reported facing far less scrutiny. Just like Manziel being treated as fighter for social justice, this of course, is as much a story about white privilege as it is about racism towards Black athletes. Whereas white prospects are assumed to be high character players unless proven otherwise, Black athletes have to disprove the racial stereotypes attached to them. On a similar note, even those critical of Manziel and his off-field behavior most often tend to give him a break, describing him merely as immature or as not being a team player and thereby backhandedly excusing his choices as a case of ‘boys will be boys’. For instance, while Manziel flashing bundles of cash in a casino is seen as not a “good idea” – because others might get him in trouble, for example if a “21-year-old friend [had] a beer in the picture that looks like it belongs to Manziel” – we can only wonder if a similar picture of a Black NFL prospect would have been treated as favorably.

Update: Whereas Reggie Bush  had to forfeit his 2005 Heisman award for receiving ‘improper benefits’ after a 2010 investigation, Johnny Manziel makes the cover of Time Magazine – with Time asking “where’s his cut?”

Moreover, the fact that the investigation into Manziel’s alleged wrongdoings were quickly settled before the start of the season and have resulted in not much more than a slap on the wrist, can be understood as big time football’s attempts to cater to its white fan base. Paralleling the hopes that had been put into Tim Tebow until recently, the support Manziel received seems to indicate the longing amongst some demographics of football fans for a young white superstar; especially in light of the current shifts towards more Black athletes at the most prominent position in the sport, as exemplified by last years class of highly successful first-year quarterbacks of color in the NFL. Moreover, these celebrations of white wealthy athletes and the NFL’s attempt at dissociating itself from images of what some understand as Black culture – as exemplified in the tattoo controversy – become even more pressing in light of the recent settlement of the NFL’s concussion lawsuit. Some commentators have predicted that concerns about brain injuries inflicted through playing football might lead white middle-class parents to steer their sons away from playing the game. If this comes true, big time football might have even more reason to engage in its problematic racial politics: With a majority of consumers and possibly less and less of the producers of the sport being white, the fear of losing significant amounts of the white middle-class demographic seems to be further motivation for giving white athletes as pass where Black athletes would come under close scrutiny.

Buffinton, Daniel T. 2005. Contesting Race on Sundays: Making Meaning out of the Rise in the Number of Black Quarterbacks. Sociology of Sport Journal 21: 19 – 37.

Leonard, David J. 2012. After Artest. The NBA and the Assault on Blackness. SUNY Press.

Mercurio, Eugenio & Vincent F. Filak. 2010. Roughing the Passer: The Framing of Black and White Athletes Prior to the NFL Draft. Howard Journal of Communications 21(1): 56 – 71.