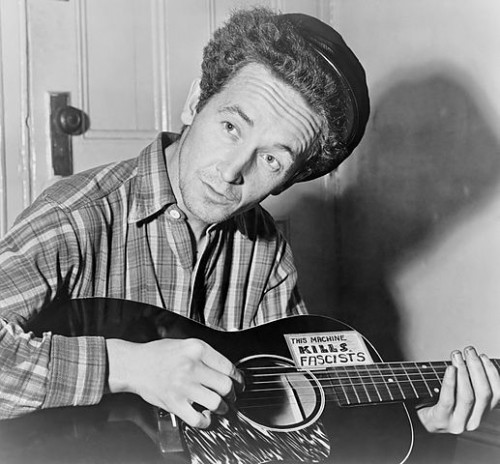 Two days ago marked what would have been the centennial birthday of iconic folk artist Woody Guthrie (1912-1967), perhaps best known today for his classic “This Land is Your Land.” His biography is a fascinating (and short) read and provides some context for the scathing social commentary in many of his 100+ songs. Much of his music is raw, simple, and emotionally charged – just a man and his guitar. But it was also forged in his own contentious politics and experiences traveling the country in the 1930s – a time when economic and environmental disasters (the Great Depression and Dust Bowl, respectively) ravaged the country making breadlines, Hoovervilles, and civic unrest easier to find than a decent job. Guthrie’s music may reflect that era but many of his songs, especially the anthems he wrote in support of the labor movement and other protest music, remain well-recognized and relevant today.

As sociologist William F. Danaher (2010) shows, music can be a key component of social movements that “[provide] a means for solidarity around shared causes and resistance from those who prefer the status quo.” Danaher reviews the literature and identifies four ways that music may aid a movement: fostering collective identity, staking out space (which may be physical or social), invoking emotion, and acting as a cultural resource. For brevity’s sake I focus only on the first two, but encourage readers to look through the article. Nevertheless, taking a closer look at just a few of the songs in Guthrie’s catalog lends support not only to Danaher’s argument but also Guthrie’s legacy as a musician and activist.

Social movements may rely on collective identity (shared norms, ideologies, and goals) to foster solidarity and advance their cause; music can be instrumental in this process. Guthrie’s ubiquitous “This Land is Your Land” may not have originally been a typical protest song, but countless artists covering the song have used it as such. The opening verse immediately touches on a broad collective identity, that of being American: “This land is your land, this land is my land/From California to the New York Island/From the redwood forest to the Gulf Stream waters/This land was made for you and me.” Guthrie references well-known landmarks across the country and indeed America itself proclaiming it is our land, drawing on a frame of inclusivity and a shared status as Americans. But later verses are not so optimistic: “In the shadow of the steeple I saw my people/By the relief office I seen my people/As they stood there hungry, I stood there asking/Is this land made for you and me?” This verse transforms the song into a commentary that identifies social problems (hunger, poverty, disenfranchisement) and poses a question that serves to mobilize listeners.

Music may also provide movements with social space, or “opening within the framework of society where people are allowed to criticize the dominant culture within acceptable limits (Danaher 2010).”  In 1940, Guthrie wrote “Union Maid” (also known as “Sticking to the Union”) to rally women workers. Predating the iconic Rosie the Riveter by two years, the lyrics are surprisingly progressive for the time: “This union maid was wise to the tricks of company spies/She couldn’t be fooled by a company stool, she’d always organize the guys/She always got her way when she struck for better pay/She’d show her card to the National Guard.” The Union Maid is a fearless and wise woman, takes a leadership role in organizing, and joins her fellow workers on the picket line. The Union Maid also stands in contrast to the typical woman in 1940, a time when employment opportunities for women were limited and passivity or domesticity were the norm. In creating his character as such, Guthrie was sending an invitation to women to participate in the labor movement and legitimize their struggles in a social space dominated by men (this is, of course, compounded by the already contentious politics of the labor movement, another contested terrain).

Guthrie’s music remains a relevant social commentary today. “This Land is Your Land” has been covered countless times. Notable recent uses include protest music, as in the case of the Wisconsin labor protests earlier this year, and political satire (with altered lyrics) during the 2004 elections (also sparking a minor copyright battle). Guthrie’s estate, led by his daughter Nora, has posthumously finished some of his unreleased songs by matching Guthrie’s lyrics with music provided by contemporary musicians. Songs such as “All You Fascists” were surely intended as protest music decades ago (“Race hatred cannot stop us, this one thing we know/your poll tax and Jim Crow and greed has got to go”), but their recent release suggests that Guthrie’s ideas remain fresh.

Danaher (2008) provides a highly useful framework for examining the utility of music in social movements, and Woody Guthrie provides a wealth of music written for just this purpose. Guthrie’s legacy as a folk music icon is well-solidified, but his role as activist and the legacy of his music in advancing social change  seem particularly salient on his centennial birthday. Given adequate resources, a proper content analysis of Guthrie’s songs and their use by social movements would make for some interesting sociology. But for the time being, I turn the conversation over to you, readers: Are you willing to share your thoughts on the iconic Woody Guthrie or his musical and social legacy? Is music really an important tool for social movements? Was this land really made for you and me?