Over a decade since the 1 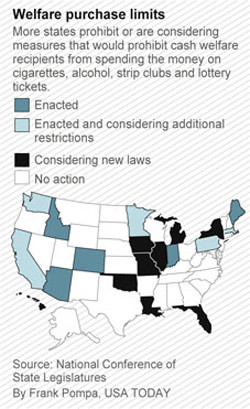 996 welfare reform bill, welfare is in the news again.  The latest controversy is over laws that seek to limit what welfare recipients can spend money on.  This comes shortly after state legislatures passed laws to require drug testing of welfare recipients.  These new laws are not a direct attack on what remains of anti-poverty programs in America.  Instead, these initiatives allow for both a deserving and an undeserving poor.  A moral evaluation of the poor, however, contributes to the notion that poverty as an individual failing rather than a social problem.

Negative stereotypes about the poor have long animated debate over welfare.  Women on welfare are aware of these negative stereotypes and often define themselves, but not welfare recipients in general, against such stereotypes (Seccombe et al. 1998).  Poor women, thereby, can reinforce these stereotypes in an attempt to cast themselves as the deserving poor.  There are potentially a growing number of people taking this route. 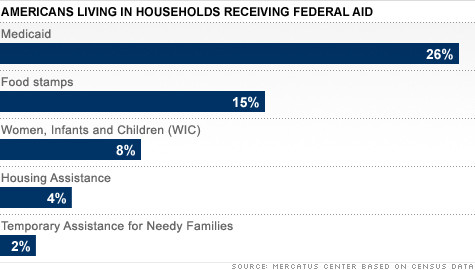 The last bar is TANF – what is commonly known as welfare

In bad economic times, when the number of people receiving government assistance is rising, politicians must acknowledge a class of deserving poor to reap the political rewards from the depiction of an undeserving poor.  In this way, politicians can get politically mileage out of the idea that a class of undeserving poor is hurting the society while slyly suggesting to their poor, unemployed, or struggling constituents: “No, I don’t’ mean you.  Those other people, you know who I’m talking about.”

Shawn A. Cassiman’s (2008) article entitled “Resisting the Neo-liberal Poverty Discourse,” summarizes research on welfare discourse, and concludes by noting that, “Discourse shapes our reality and, in policy circles, becomes or explains our policy reality.”  The 1996 law subjected welfare mothers to a series of new requirements much of which relied upon popular myths about welfare (Mink 1998).  For example, “child exclusion” laws that excluded children born while a mother was on welfare from benefits were based on the idea that women on welfare were having more children to get more welfare money.  However, there was and is no relationship between size of welfare payments and number of births.  Work requirements were based on the idea that welfare recipients did not want to work or had become unable to work because of their reliance on welfare.  However, most recipients cycled in and out of the workforce, and the average time women were on welfare was short.  Finally, the persistent “perversity thesis” which argues that welfare causes poverty by creating dependency has no merit (Block and Somers 2005).

Cassiman (2008) writes, “Many of us have heard welfare recipients disparaged and welfare programs denigrated, not only in the media but also in our personal conversations.”  He then asks, “How do we respond?  Do we?”

I do.  I respond to these disparagements in my classrooms and in personal conversations by first challenging the charity frame.  Welfare is a social insurance program.  Much like the popular insurance programs for the elderly, which insure against old age and illness (even when such illness is partially the fault of the recipient of aid).  I then point out that poverty varies overtime due to economic conditions rather than shifts in personal morality. 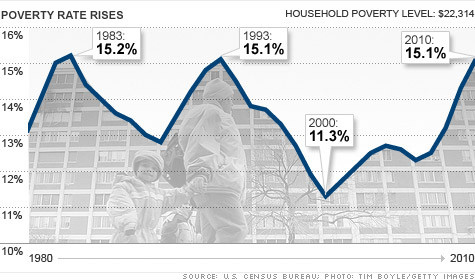 However, even with this data people can still adhere to the belief that while some of the people on welfare are there through no fault of their own, many are just lazy.  I then point out that while some people may make mistakes or act in ways that are not financially sound, we must consider that mistakes don’t affect everyone equally.  Getting fired because you showed up late for work is a mistake but that mistake will mean poverty for some and a mild inconvenience for others.  Particularly those who have access to family wealth will likely suffer few consequences, while those who do not may be forced to take predatory loans thereby sinking themselves into a cycle of debt.  Again, I note, the different outcomes are not the result of differing morality.

Finally, I point out that welfare is a band-aid for an imperfect economic system.  Evaluating the morality of individuals we have never met is perhaps not the best place to begin thinking about how to improve that system.

Somers, Margaret R. and Fred Block – From Poverty to Perversity