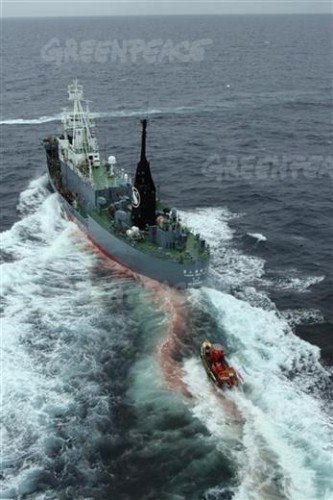 The Yushin Maru No.2 catcher ship attempts to transfer minke whales to the Nisshin Maru factory ship, leaving a trail of blood in the water. © Kate Davison/Greenpeace

Scientists used genetic analyses to connect meat from sushi restaurants in the United States and South Korea to whales captured under the Japanese whaling program. According to the scientists, the Japanese engaged in illegal trade of endangered species.

Although an international moratorium prohibiting commercial whaling was established in 1986, an exception enabled Japan to slaughter hundreds of whales per year for the purposes of “scientific research”. Using the disguise of “scientific research”, the Japanese captured whales that were in danger of extinction and then sold the whale meat on the world market.

This month, the United States Delegation to the International Whaling Commission considers whether to permit commercial whaling quotas in Japan, Iceland, and Norway. Wendy Elliott from the World Wildlife Fund explains: “Essentially what the compromise would do is allow commercial whaling in the Southern Ocean. This is a designated whale sanctuary, it’s one of the key places in the world for whales – if there is one place on earth where whales should be protected it is there.”

The Cove illustrates that the Japanese engage in illegal fishing operations in order to generate profits on the world market. Environmental sociologists might raise the question: Is the scientific research mentioned above a cover for an illegal, environmentally unsound, and financially profitable operation?

“Obama: Keep Your Promise to Save the Whales” By Greenpeace

The Cove Directed By Louie Psihoyos