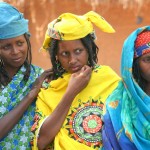 The category of the Exotic Other has embraced the African female; at least for this season.  The New York Times recently published a fashion article (see below) equating Africa, Tarzan, and tree climbing with sensuous beauty in the world of fashion.  Aside from the glaring issue of the geographic ignorance of these comments, this article reveals the explicit racism, commodification, misappropriation and sexism inherent in media and art that continue to have a negative impact on those who are being “othered.”

According to Malcolm Harris, the director of a popular fashion-focused Webzine. “It doesn’t matter who you are or where you’re from. People are incorporating bits and pieces into their wardrobes and their lives.”

Yet it does very much matter who you are and where you are from.  The models strutting the catwalks in African-inspired fashion are majority white and Western and perhaps most importantly, this is about taking bits and pieces of interpretations of “Africa” and incorporating them into the wardrobe of mostly Western women.

Perhaps most distressing in the article is the overt manipulation of cultural exoticism for capitalist purposes.  As Adorno and Horheimer remind us, “Under monopoly all mass culture is identical, and the lines of its artificial framework begin to show through.  The people at the top are no longer so interested in concealing monopoly: as its violence becomes more open, so its power grows” (Horkheimer and Adorno 1944, 121).  In other words, today Africa, tomorrow Thailand may be hailed as the new look for the season.  The marketing employed does not seek to cover up the fact that this is marketing, rather, it does so openly and freely.  In the end the only difference is that the “Exotic Other” of the season changes.