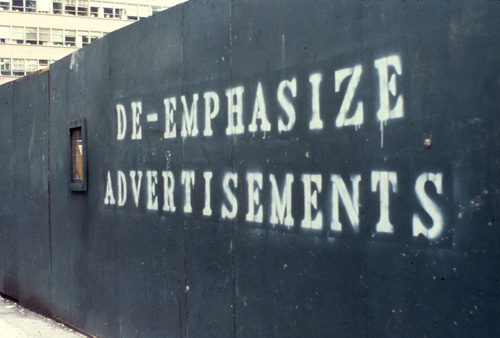 As endless rhetoric surrounding youth and body image continues to proliferate both in and outside of the academy, it appears that ephemeral panic has taken the place of organized action. The profitable persistence of homogenized and suggestive messages/imagery coupled with the lack of media (and sex) education in the United States has resulted in a version of empty empathy: a fleeting visceral response unsupported by contextual comprehension (E. Ann Kaplan). While Americans are becoming increasingly “empathetic” to the issues surrounding youth and body image – perhaps through exposure to a Media Education Foundation video – it remains that there is no national initiative to combat this social effect that owes most (not all) of its influence from the cultural/creative industries. However, while the United States is held hostage by both a dismantled media literacy movement and an increasing business-oriented attitude toward media for youth, Australia is trying something different. Yes, the United States is home to many non-profit organizations, media literacy programs (typically relegated to “after –school” status), eating disorder campaigns, etc. However, the Australian government has found a way to merge all of these initiatives and promote it on a massive scale by holding both individuals and industry responsible.

Based on advice and suggestions from the National Advisory Group on Body Image, Kate Ellis, the Australian Minister for Youth, announced (June 27, 2010) government initiatives to promote positive body image for Australia’s youth. In her statement, she writes, “It is vital that we recognize the serious implications of negative body image and take action to promote positive body image among young Australians. There is no simple fix for the problem of negative body image. However, this complexity is not an excuse for inaction.” Based on findings from the National Advisory Group on Body Image, the initiative involves two key areas: “industry and popular culture” and “individuals and their immediate social environment.” Breaking away from the traditional media effects paradigm, this initiative recognizes that negative body image is the result of a combination of forces, not just media message absorption. For individuals, the initiative involves education (including media literacy), skills training, and the improvement of the school environment and at the structural, or industry level, the initiative includes body image friendly awards and a body image friendly symbol.

In order to attain the body image friendly symbol, advertisements and other media products are urged to follow the “Voluntary Industry Code of Conduct,” as developed by the National Advisory Group on Body Image. Geared toward the “fashion, media and advertising industries,” this Code is meant as guidance and encouragement. According to the Introduction to the Code, “The Code outlines Principles to guide industries to adopt more body image friendly practices. It encourages more diversity in the selection of models, a wider range of clothing sizes in retail fashion, the use of realistic and natural images of people, and disclosure when images have been digitally manipulated.” More specifically, the Code is outlines as follows: (1) Positive content and messaging; (2) Diversity; (3) Fair placement; (4) Realistic and natural images of people; (5) Healthy weight models; (6) Appropriate modeling age; (7) Fashion retailers supporting positive body image. All of this information can be found on the website.

As the first government-issued initiative of its kind, it will be interesting to track the successes and failures of its implementation. For many activists, scholars and parents (among others) who are deeply invested in this issue, an initiative like this offers an example of praxis that is noticeably absent in other countries. However, while Australia’s action on this issue brings a smile to my face, other questions begin to surface: If the code is voluntary, will industries take it seriously? Will this action offer a normalizing practice and thus draw even more attention to those “abnormal” scandalous media texts? How did it get this bad that there has to be a government-issued initiative to provide therapy from media messages? (Note: The last question is rhetorical) In the end, Australia’s body image initiative exemplifies the urgency regarding the promotion of positive body image among youth. Is it strong enough to defeat capitalism’s profitable menu of negative body imagery? Probably not. Is it strong enough to challenge this menu? Absolutely.

“Media, Body Image, and Eating Disorders” from The Handbook of Children, Media, and Development