Sociology Lens Editor’s unexpected reflections on the year so far 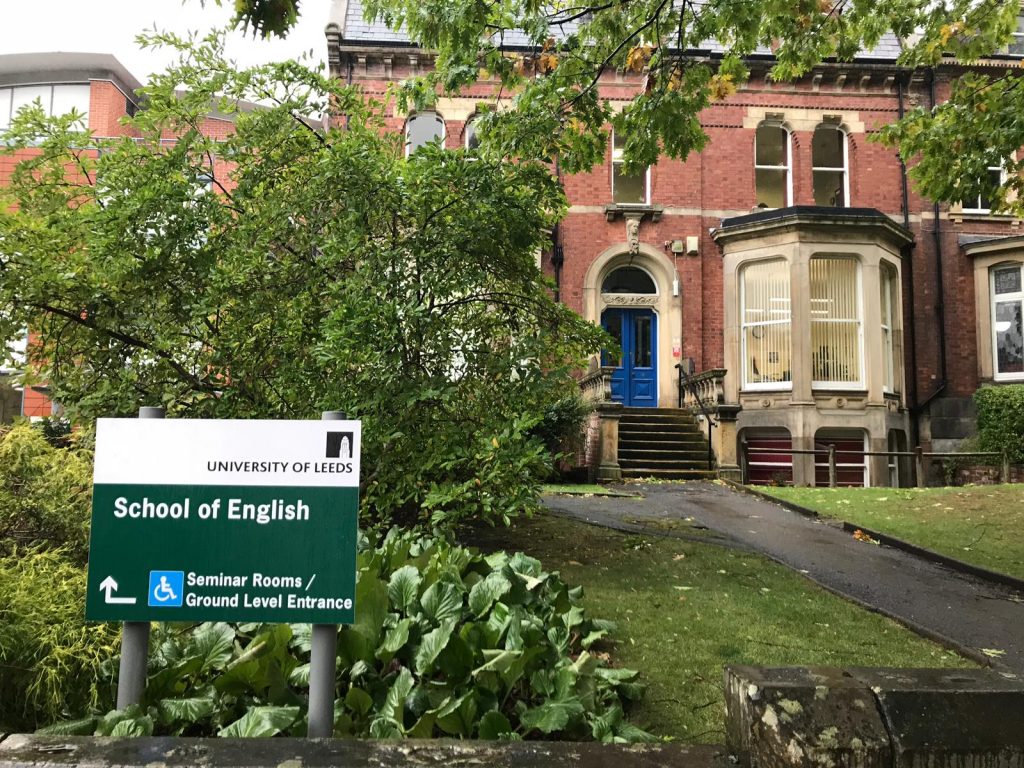 This time of year always brings me mixed emotions. Autumn is my favourite season and as a once upon a time student of the English Romantic Poets, I’ve always enjoyed the nostalgia of mists and mellow fruitfulness (1). The lowing sun still has its warm but heavy glow, the creeping light winds up the walls a little earlier every day, whilst the coming darkness slides along the street, Rubbing its back upon the window-panes (2)  as we start to curl about the house and put our year to bed. In recent years, this comforting nostalgia that comes with falling leaves and amber hues also brings a sadness that another year seems to prematurely be coming to an end, and a feeling that time is constantly speeding up.

We start our year making resolutions and wishing away the short days, spend spring too often frantically finishing up work before the end of the financial year, whilst also planning activities for the year to come, then summer rushes past in a blur of meetings, conferences, a holiday if we’re lucky, and then, here we are, brought up short, wide eyed asking each other ‘where has this year gone?’ With this mind, and after a moment of personal reflection for me this week, I wanted to pause and take stock of some events and activities we’ve been involved with this year.

One of the first conferences I attended this year was the 2018 British Sociological Association (BSA) Annual Meeting, in Newcastle in April. It marked an anniversary for me, a year since becoming editor of Sociology Lens, and of putting myself out into the sociology community to champion the small yet mighty incredible learned societies I work with. During the conference I interviewed Diane Richardson, Lisa Garforth, and Ruth McAreavey, on very different subjects, but as I reflect on them now there is a sense running through all of the discussions, of uncertainty at a point in time of great change. Lisa talks about what it means to be human in face of wide scale environmental damage which we created, and how we can imagine a hopeful green future after nature. Diane talks about how far we’ve come in terms of LGBTQ rights, having found successes through rights of citizenship, but in today’s climate, where do we go now and could this progress be undone? Ruth discusses the future uncertainty of rural development in the face of Britain’s departure from the EU, and what it might mean for seasonal migrant workers who are already in precarious circumstances.

At the BSA conference I also interviewed Victor J. Seidler on his book, Making Sense of Brexit: Democracy, Europe and Uncertain Futures (Policy Press, 2018). That interview published on Sociology Lens here,  amongst other things talks about making sense of the event  of Brexit as an exercise in working out his own history and his own identity, in the face of uncertainty. He talked about the notion of roots and rootedness, and the conflict between ‘roots’ and ‘routes’ in the sense of looking backward and forward, and the value placed on that within the current leaning towards having a ‘universalist’ consciousness. In this sense, your own family roots might be less valuable than the creation of new hybrid identities in the present, and the routes or journey you are taking. We discussed the problems with this, and how you carry your history with you throughout your life, and how as you get older that history becomes more important, and you need to make sense of it.

Victor also explained that way he has experienced events such as Brexit, not only as a public disturbance, but as a disturbance to social theory that prompted him to step back and rethink the sources sociologists had relied on, and to look back to earlier critical thinking that had been lost. “In any theoretical switch or shift there are insights that allow you to break into new ground, but there are always losses. Only been much more recently that there’s shift back to ethnography and even community studies, and sociologists are starting to reevaluate projects that were in British sociology in the 1970s.” 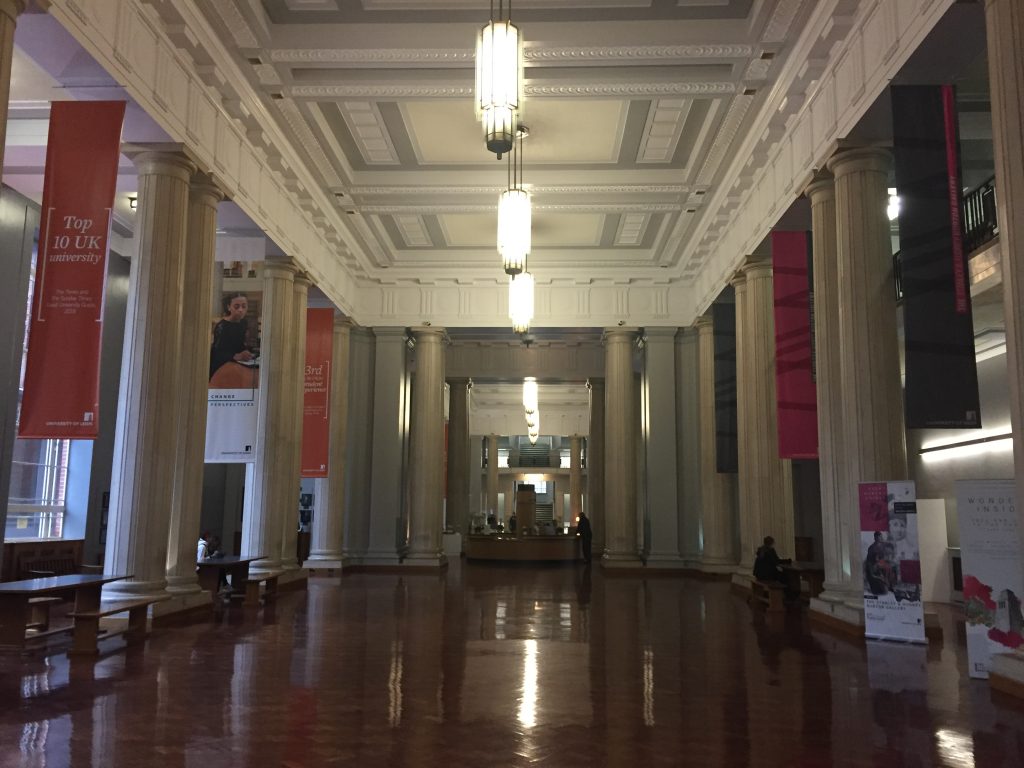 I think about this in a personal context, that idea of gain and loss, and histories remade.  This nostalgic time of year is also – for those still studying or working within academia – a time of fresh starts. That first new term, bringing with it new beginnings, new chapters, new shoes, new cities, new homes, a new pencil case, new page, new friends, new challenges, new thought, new reason and argument. The next few months might be the most formative, as they were for me when I moved from sunny Hayling Island on the south coast of England, to the vibrant University of Leeds. The first night at Leeds, I lay in my tiny student bed in a student house in Hyde Park, the noise of the city rattling the window, and I cried, totally overwhelmed by where I was and what I had done coming here. This week I returned to Leeds, 17 years almost to the day, for a conference held by Global Policy journal and institute, discussing Brexit and challenges for the North of England, and quite unexpectedly I found myself standing on campus crying again. 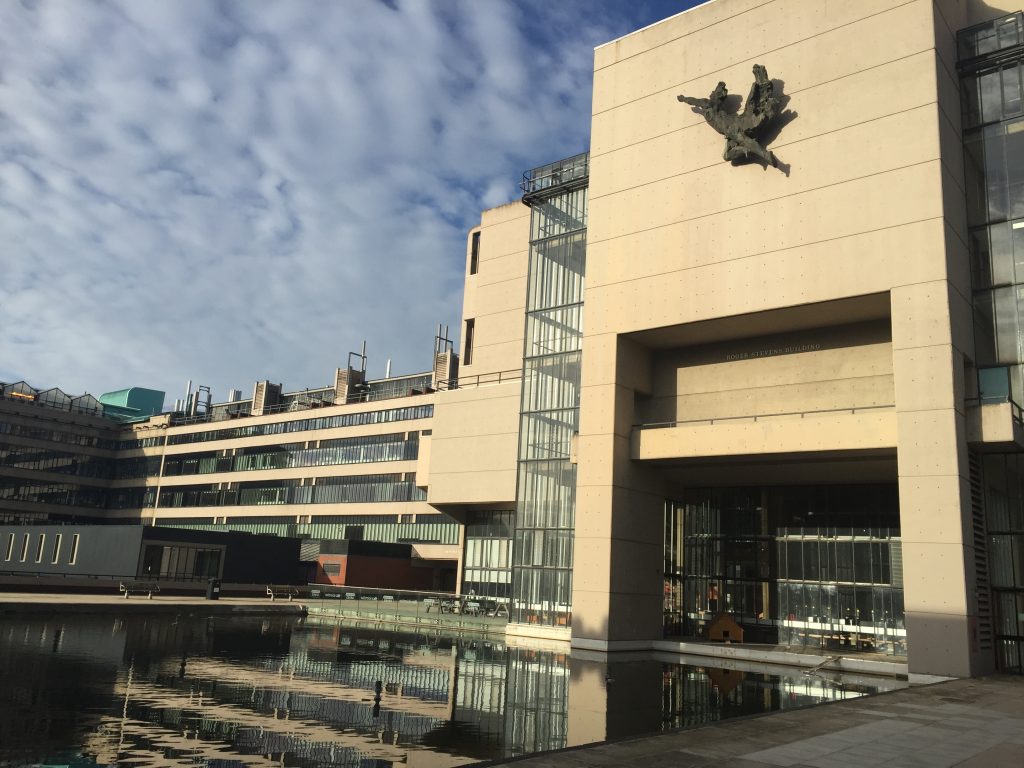 The last time I was on Leeds University Campus was 14 years ago, just after graduating from my undergraduate English Literature degree, with my boyfriend who I’d met that first month of my first year there. He’s now my husband, and we’ve since lived in Bristol during postgraduate years, then the Cotswolds, before settling in Oxford. Jobs have been started and left, careers built (well, still in progress), targets met, weight gained, shedded, gained, countries visited, selfies taken, emojis & hashtags learnt, weddings, funerals, friends made, and some lost, houses bought and sold, families started, or perhaps not yet, tears and tantrums, and lots of laughter. Life has weaved itself in its wonderful and rich everyday way. As I stood on that campus, I thought about the person I once was, fresh faced and full of possibility, naïve, uninformed, but mind open, ready to learn and to become the somebody I hadn’t yet comprehended. I was paying for myself to go to Uni, the first person in my family since my grandfather, himself the first person ever in our family. It was big. And as I remembered all the buildings and the corners of the campus, and recalled what they meant the first time I was here, I felt a tremendous sense of loss for the person I had left behind, that I had changed from, that I had allowed to be layered over and remade again and again. 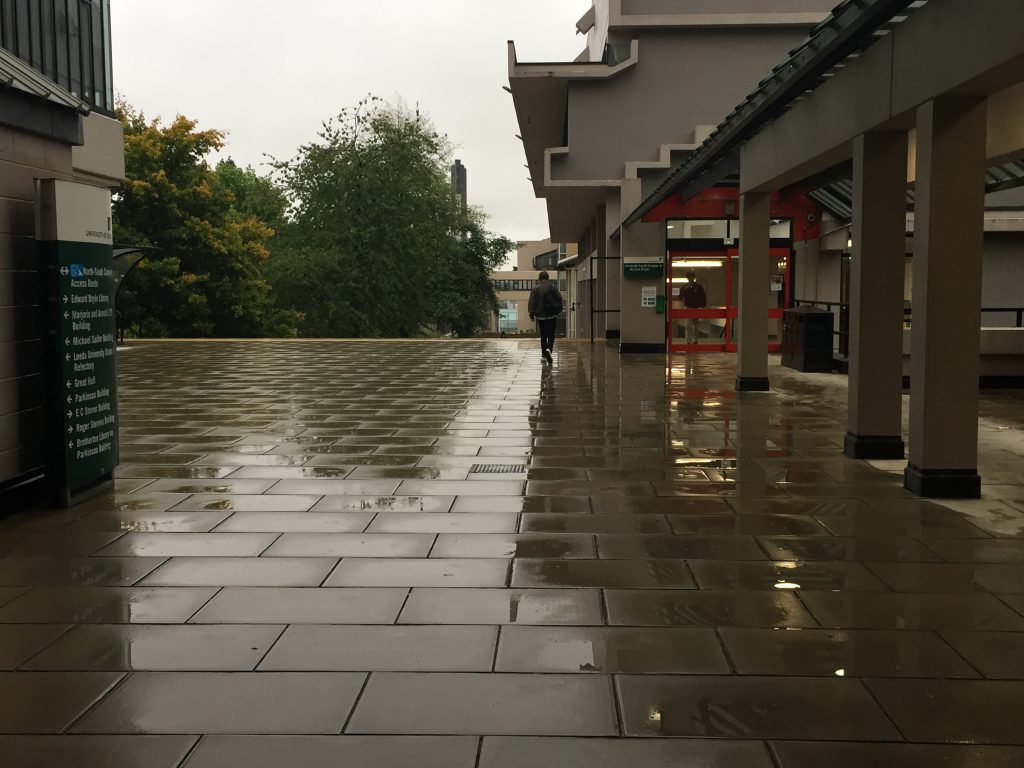 View of entrance to ‘red route’ and the Edward Boyle Library, University of Leeds.

Even the recent BSA Medical Sociology conference in Glasgow in September had this dual forward/backward looking theme as it celebrated its 50th anniversary, ‘Celebrating the Legacy – Medical Sociology: the Next 50 years.’ The conference was decorated with tributes to influential medical sociologists over the past 50 years. And this was especially poignant for the many people who had the joy of knowing and loving Gareth Williams, the  co-Editor in Chief of flagship journal Sociology of Health & Illness, who very sadly died this month after a 4 year illness. A tribute to Gareth, and to his contribution to medical sociology, is published here.

To sum up this rather meandering piece, I’m thankful that in my job I have the privilege of speaking to some fascinating people doing vital work. Over the past year I’ve interviewed people working across the breadth of sociology, working to inform change, to reduce inequalities, improve our understanding of global issues, shape the way we care for people, how we protect our environment, how we improve people’s rights and achieve social justice. As President of the International Sociological Association  (ISA) , Margaret Abraham, said at the ISA World Congress of Sociology, Toronto, in July:

“At this critical time, we sociologists must share our research, reflect, and respond to issues, provide clear frameworks for analysis, counter distortions, and substantiate our perspectives on key concepts in terms that are accessible and straightforward. […] We must make an impact and challenge conventional impulses around how things have been done because it is now time for change.. […] We have an intellectual, moral and social responsibility to generate and share knowledge and engage in collective action to build a better and more just world.”

This recent Global Policy conference was no different. Practitioners and academics came together to look at how in the face of wide scale change, we deal with the challenges of growing inequalities and social issues. In between talk about how Britain is going to deal with education, the national health service, climate change, transport and infrastructure, immigration, energy tariffs, research and development funding, the language keeps coming back to values. In the face of change, we must think about what our ethical standpoint is, what our values are, what we are teaching the younger generation about togetherness, and what voice and identity we want that generation, and our country, to have. Global Policy’s Online Editor, Tom Kirk, has written a detailed review of the conference, here.

Reflecting on these very different discussions I’ve had over the year, I appreciate the work that sociology and related disciplines are doing trying make sense of where we are and how we might move forward in the face of uncertainty. A lot of us are questioning how we and the world got to the place it is today, and for me, standing on ground I last walked almost half my life ago, I’m thinking about that personally. I’m reflecting on the person I am now interpreting the world, and what has been lost and what had been gained, and what will come next. 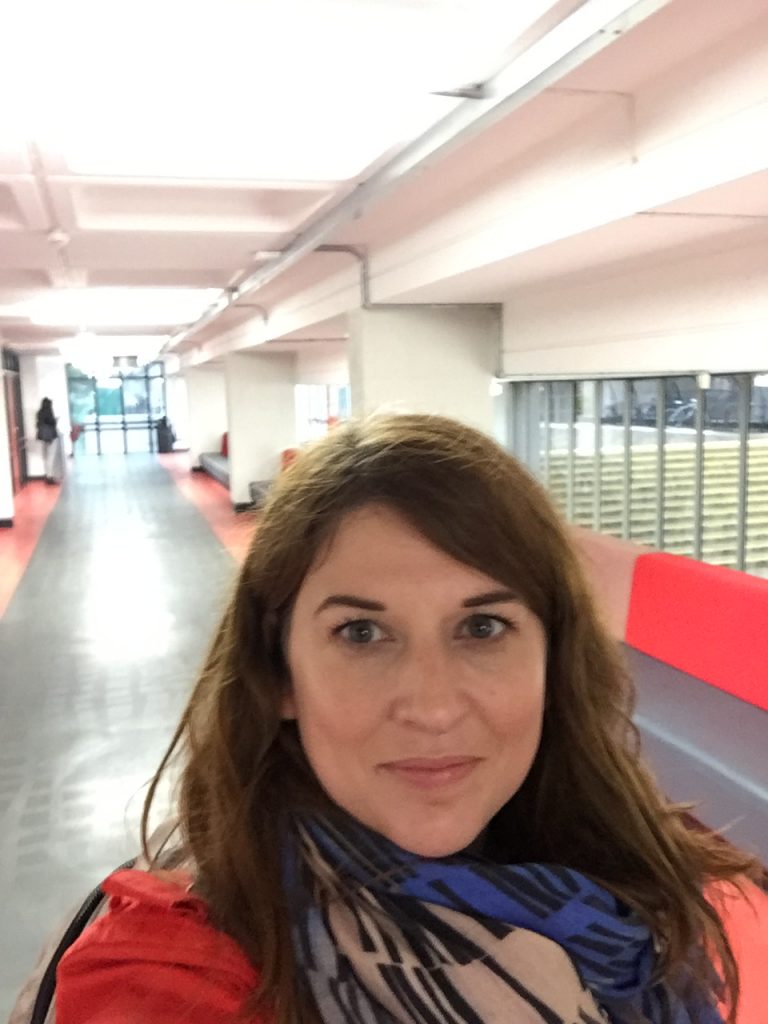 Me. On ‘Red Route’, University of Leeds

Francesca Halstead is a Senior Publishing Manager at John Wiley & Sons, and the current Editor of Sociology Lens. All view expressed are the author’s own.