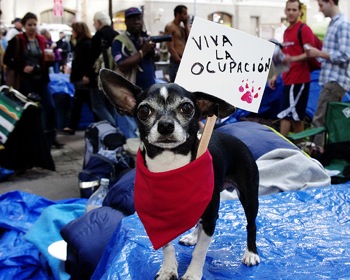 Since the Occupy movement began in September, my sociological imagination has been churning with questions. I initially thought: Is this the beginning of a revolution, or is it an anti-tea party left wing group? But most of all, I wondered more broadly: What is it? Seemingly, I am not the only one in the realm of confusion. The Occupy Movement has been criticized for not being a cohesive movement. It has likewise been lauded as unstructured, lacking of a clear agenda, and a disjointed group of “lazy, unemployed” people. In all reality, the list could go on with the criticisms. It behooved me to ask my students and colleagues what they believed the movement was meant to represent. While I was met with different responses, I was most commonly told that the protesters are an impassioned group of people: “The 1%” who have taken it upon themselves to speak on behalf of the 99% that are fed up with exploitative, economic meltdowns which are the fault of the big banks.” Many respondents were fed up with the fact that when the rich make “mistakes” they do not get prison; they get bailed out (see Jeffrey Reiman’s, The Rich Get Richer and the Poor Get Prison). Underneath the surface, both the movement and public perceptions of it are  multi-faceted and complex. My next move, therefore was to continue this line of questioning at the movement itself.

I visited the movement in Chicago, IL, Atlanta, GA, Lansing, MI and Washington, D.C., all in late October and early November when the police intervention was only beginning. In Chicago, the movement “headquarters” was located at the Federal Reserve building. Camping was not allowed in Chicago, so people hanged out all day then went home. Many got back up and returned again the next day. This differentiates this portion of the movement from others I personally witnessed, and those I viewed through the media. It seems that there has been a focus in the press on the tent cities that have popped up all over the U.S. as a main source of “the problem,”  which has shifted the issue surrounding free speech to one of public health concerns. As these “tent cities” are now being dismantled in many cities, we may wonder whether the movement will be able to sustain itself without such a visible and widespread physical presence. Consider that Joel Best (1999) notes that activists are most likely to succeed when they take ownership of a prospective social problem; this occurs only if they succeed at attracting and maintaining mainstream media attention on the issue in hopes of pressuring policy-makers to take action. Lacking the visible spectacle of the tent cities, the question emerges whether an otherwise unstructured collective of Occupy movements can maintain the requisite amounts of public visibility to remain in the larger social consciousness.

Given these long-term viability concerns, I spoke with quite a few people at Chicago movement regarding why they kept returning day after day. Overall, they continued to return because of the passion and energy of the movement. When I inquired as to what was their personal purpose in joining the movement, I received, of course, a multitude of responses. Many truly believed that something/anything needed to be done; some folks were interested in anarchy; others wanted fair trade or labor practices to be required of businesses; still others wanted “the imprisonment of the top people at corporations, who exploit the worker and rob the tax payer.” This particular movement marched to the Congress Hotel from the Federal Reserve building in order to join America’s longest union strike (since 2003). After that, they marched down to Trader Joe’s to protest unfair labor practices and then returned to the reserve building, where many went home only to return the next day.

What I also found interesting was the diversity of the movement in Chicago. I met professors, students, working class folk, homeless veterans, people of different colors, and people of different sizes. I also watched the media beeline it to the shortest person who sported some blue hair. Indeed, the sensationalism in the story results from the extreme pictures and opinions, which is what I see when I watch the news, and is not unlike the popular reduction of the Tea Party Movement into a cascade of racist imagery and overtures. Still, what I saw in this sea of faces was a diverse group of people that, while participating for different reasons, all shared an underlying cause. Yet, as I seek to discuss the emergent social makeup of the entire movement and not just a sum of its parts, we are all left to consider whether social movements themselves, and the very viability of grassroots protest more generally, are as fundamentally tied to sympathetic mass media presentations as they were in the days before Twitter, Facebook, smart phones, and the Internet itself.

Gitlin, Todd. (1980) The Whole World is Watching: Mass Media in the Making and Unmaking of the New Left. Berkeley: University of California Press.

Rebecca Hayes is an assistant professor of Social and Criminal Justice at Central Michigan University. Her recent work includes researching media representations of gender and race, and research on student disclosures of sexual/dating violence to professors. Her passion is firmly ensconced in the realm of public criminology and the majority of her spare time is spent assisting in the fight against violence against women.