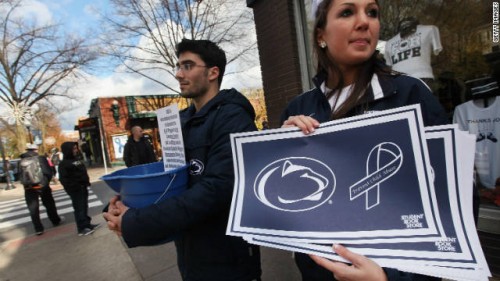 I’ve read a lot about the shocking revelation that a former coach at Penn State allegedly molested up to 8 boys and raped at least one.  The story is all the more shocking given the grand jury testimony that points to a possible cover up by Penn State officials.  Indeed, media coverage of who knew what and when has almost eclipsed coverage of the original alleged crimes.  Two Penn State administrators were charged with perjury and amid the outrage the University board fired the University President and long-time football coach Joe Paterno.

Like every scandal or tragedy, news reporters have called this a teachable moment.  Here I want to consider how such a case is teachable for sociologists.  I am somewhat hesitant about these kinds of events.  After all, one case does not make a social trend or constitute the kind of empirical evidence from which sociologists make claims about society.  In addition, social claims do not automatically predict or explain single incidents.  Indeed, I consistently remind students that to make such assumptions is a misuse of sociology.  So, after spending the semester explaining the sociological imagination how can I use a single case as a teachable moment?

I won’t review all the grim details here but instead focus on two oft-mentioned concerns.  The first is why no one reported these incidents to the police and the second, why Penn State students protested and rioted, not over the possible cover up of child rape, but over the firing of their football coach.

Much of the debate in the media over the first issue has involved individual moral evaluations – of Coach Paterno, the grad assistant who said he witnessed the rape, and the individuals whose legal duty it was to report the accusations to the police.  Without delving into a psychological profile of the individuals involved and weighing in on attempts by many to antiseptically quarantine certain individuals from the “true villains,” I believe that I can point to some features of our society that make these events more likely.

If we move away from the speculative noise surrounding this specific incident, we should note that rape is one of the most under-reported crimes in our society.  This under-reporting is, in large part, due to the widespread assumption that rape victims, even children, are not blameless.  Victim-blaming is a well-documented piece of what scholars refer to as “rape culture.” Victim-blaming contributes to rape because it allows rapists to partially legitimize their own behavior, but also because it contributes to the silence around rape as victims internalize the idea that they bear some responsibility.  A conscious cover up complete with damning emails documenting threats and payments of hush money may emerge in this one case, but such cover ups are not the reason that so many sexual assaults go unreported.  When others know or suspect rape or sexual assault a conspiracy of silence is more likely.

Similarly, the response of Penn State students who appeared to care more about their football team than innocent children is likely less a case of misplaced priorities of an immoral group of people and more about collective identity under siege.  The Penn State football program and the icon of Coach Joe Paterno were symbols of the community of Penn Staters.  Paterno, and the team, served a similar function as the totem in Durkheim’s Elementary Forms of Religious Life by symbolizing the community and its values.  While not condoning or excusing such behavior we should seek to understand how collective identity forms and the risks associated with the kind of mini-nationalism that sometimes develop around college football.

By looking at these larger cultural features as potential explanations not just for the single case at Penn State but for cases like Penn State, we can better understand how the culture and structure of our society conditions outcomes like the Penn State case.  My training as a sociologist provides me no more insight into what exactly happened in this particular case then any random poster on an internet blog.  However, looking to the larger social forces that condition social problems allows us all to move beyond individual moral blame, which while certainly warranted in this case, is far too limited in its ability to understand social problems.  Ameliorating rape and the silence around it is a social problem that calls for social solutions not simply individual moral judgments.