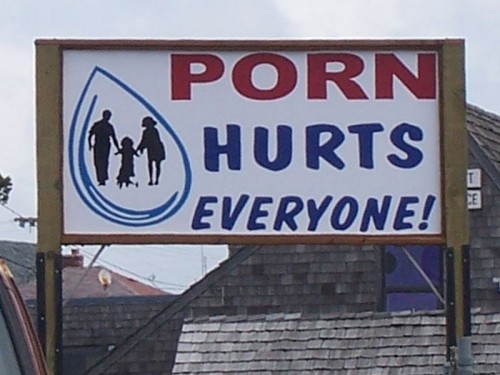 As pornography becomes increasingly accessible due to technology (mobile phones, Internet, etc.), researchers have started to pay close attention to its individual and cultural impact on the construction of sexuality and subsequent behavior. Research on pornography spans a variety of theoretical paradigms and methodologies, and works to answer questions regarding audience reception, political economy of the industry, content and violence, and a variety of other cultural and critical inquiries. While at one point on the margins of media studies, film studies, and sociological research, porn studies has become a staple in attempts to understand the interaction between sexuality, audience and media.

After reading this article, I began to think about the politics behind which pornography studies are published in the mainstream media and which are overlooked. There have been many studies that I have worked on or have used in literary reviews that are never included in the various “mainstream” reports/updates on the condition of pornography and its influence on culture. That being said, why are certain studies used to educate the public on the “harms” of pornography and some aren’t? As a consequence, it appears that this inclusion or exclusion shapes “official” conceptions of pornography. Frankly, the findings of this study, while useful for some, do not truly reflect the diverse and progressive findings that pornography research has generated recently. While it is understood that theoretical constructions and critiques are typically not a concern for mainstream media, empirical data, on the other hand, is a common feature – and there are many pornography studies that have generated conclusions based on statistical methods. In the end, while this recent article, titled “Boys who see porn more likely to harass girls,” is a stable contribution to this research agenda, it fails to represent the true complexity of recent methodologies and subsequent findings. Why did this journal article surface in the mainstream media? How and why are these findings more “essential” to public consciousness over other findings? Why are these selected journal articles representing all that has been analyzed regarding pornography?

Pornography, Panopticism and the Criminal Justice and Immigration Act 2008