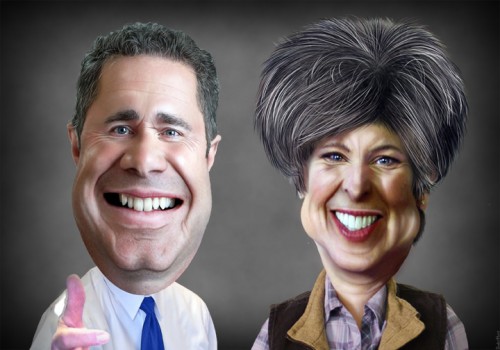 Iowa is engaged in an historical race, possibly sending their first female to the U.S. Senate.  Republican candidate, Joni Ernst, while also an Army National Guard soldier, describes herself as a mother first.  Albeit a mother who also carries a gun, castrates hogs and rides a motorcycle…just like most mothers I know.  A recent NPR piece questions whether motherhood is a qualifying attribute for national office.  The female focus group interviewed for the broadcast didn’t buy it.  They all seemed to want the “right person for the job” regardless of his or her status as a parent.

In the third Iowa Senate debate, when asked to name something admirable about her opponent, Ernst said that Democratic Congressman Braley is a “great father”.  It was a very simple compliment and one that is not typically mentioned about men running for political office.  Ernst highlighted his fathering accomplishment.  Almost all male candidates run on their father’s accomplishments whether their fathers were political powerhouses or coal miners – but it is very rare to see a male politician tout his own fathering as a qualification for office.  John Edwards did it but, well, we all know how that ended.

Both parties REALLY need women to turn out and vote next week.  The excessive discourse on women’s voting interests seem to feature one big issue: reproductive rights.  The message is that if you want to get women’s vote then all the parties need to do is say the right thing about birth control.  Specifically, make it available over the counter.  As Deana Rohlinger, author of a forthcoming book, Abortion Politics, Mass Media, and Social Movements in America, points out in her recent blog post, Republicans have embraced making the pill available over the counter thus walking a rhetorical balance between allowing women to control their reproductive decisions without alienating big business by ensuring contraception is available in employee benefits packages.

It seems identity politics is alive and well in social activism but has a new twist: parenthood or whether to be a parent or not ever becoming a parent or maybe your status in relationship to possibly becoming a parent one day in the distant future?  Social identity is one’s sense of self as a member of a social group.  Collective identity is that identity that is shared by members of a group.  Collective identity becomes important when people take political action on behalf of that collective.  If an individual’s parenthood status is a politically relevant category are we left with another binary?  Marie Skoczylas highlights the trouble with insider/outsider status in political activism here.  Will the collective “parent” face a troubling demise as a rallying category before a movement can take hold?

Relating to voters as “parents” inevitably gives way to forming the oppositional identity: “not parents” but really the category is probably “not parents yet”.  Parenthood, as a political identity, falls along a spectrum.  We are all in some relationship to parenting even after becoming parents.  The reproductive rights of young people entering college are vastly different from seasoned parents of two children who made a decision to stop making more people.  Thus activating the rhetorical turn to provide over the counter birth control pills is not necessarily a rally for ALL parents.  Similarly, reproductive rights are not an issue for all women.

The benefit of identity politics including a parenthood status is that it brings reproductive rights to the center of the debate forcing the conversation out of the realm of “women’s issues” and into a more central role that includes men and families.  Yes, both parties need women to vote in every election but men also have an interest in easy, low cost access to birth control.  As the editor of Cosmopolitan, Joanna Coles, elegantly points out in a recent interview, “Men like having sex too, and men don’t want to have a baby every time they have sex.”

So, as students, what are your parental rights?  What are some issues that could be important to ensure that education is not compromised by your proximity to parenthood?  According to Title IX standards, parents retain the right to equal access to all school programs and extracurricular activities.  This means that schools must treat pregnancy like any other temporary disability.  Schools cannot require a doctor’s note for access to extracurricular activities unless they do the same for all students who have a condition requiring medical care.  Universities should also excuse all absences due to pregnancy or childbirth as long as the student’s physician requires the absence.

In addition, students who parent in college should be allowed to work with professors to establish make-up work policies or adjust the grading policies per student absences.  Professors cannot hold their attendance policy in conflict with Title IX regulations.  Universities also cannot threaten pregnant students with loss of scholarships or grants based on their pregnancy status.  They also cannot exclude qualified applicants from opportunities that might arise through fieldwork, internships, distance learning programs, or exchange programs.  Finally, universities are required to provide students who are breastfeeding the time and the space to express milk.

Reproductive rights are not solely women’s issues and parenthood is not a binary category.  Like aging, we all find ourselves in some proximity to a reproductive category making it a problematic political identity.  If you think “Made a person, 2014” a reasonable line item on your C.V., look into how you are being represented on campus.  Do your administrators and union representatives support your right to choose parenting while in school?  What is your relationship to parenting and why does it matter?