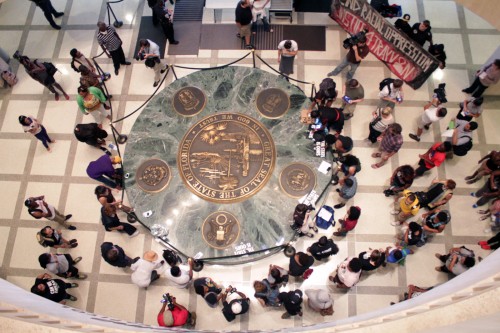 On July 13th, George Zimmerman was found not guilty in the shooting of 17 year old Trayvon Martin. Zimmerman shot Martin during a scuffle—the details of which we will never truly know—and claimed that he had done so only in self-defense. The jury believed him; much of the viewing public did not. In the weeks since the verdict, the nation has been reeling. The shooting itself, the failure of the police department, the vigilantism encouraged by “Stand Your Ground” (SYG) laws, the racial tensions—all of it brought to light deep seated issues in the US. Clearly, we are not a post-racial society.

Some have used the case as an opportunity to say hateful things. Ann Coulter, for example, had this to say: “Why do you suppose there would be a generalized fear of young black males? What might that be based on?… It’s because a disproportionate number of criminals are young black males. It just happens that when Lee Van Houten and George Zimmerman were mugged by two of them, they survived the encounter.”  Others have tried to demonize Trayvon directly, pointing to the possibility that the candy and tea he bought might be used to make a drug concoction. Still others have complained that people are playing the “race card” and making a big deal out of the case.

But something beautiful also happened when the verdict was delivered. It gave many white Americans the chance to glimpse the experience of black people in this country. (To be fair, every day offers this chance to white people who are willing to pay attention.) It provided a space for black Americans, especially black men, to voice their fears, their feelings, and know that at least some of us were listening. More than that, though, Trayvon’s death galvanized the public. I’d like to take a look at one of the collective actions occurring since the verdict, because I think they serve as a reminder that there is good out there, and that even though this world is a bit of a mess, we have power to make it better.

As a (former) Floridian, I watched the trial verdict with a heavy heart—to be from Florida is to know some of the best and worst of humanity. The white sand beaches and resort appearance mask some of the most virulent hate you will encounter in this country; it is a state of rampant homophobia, sexism, racism, and xenophobia. With the national spotlight trained on Florida, that prejudice could no longer hide behind Mickey Mouse ears and manicured golf courses. But there is a lot of good there too, and that can be seen in the actions taken by the Dream Defender activists who are currently occupying Florida Governor Rick Scott’s office, and have been for more than a week. Their singular demand is both simple and reasonable: that Gov. Scott call a special legislative session to evaluate Florida’s Stand Your Ground law. Scott has refused. He convened as task force to assess the law earlier this year, but the task force was comprised of individuals who had helped create, or who openly supported, the law in the first place and, not surprisingly, they advised him to keep the law in place. The Dream Defenders are mostly young people—people who really identify with Trayvon Martin—and they are refusing to budge.

The actions of these young people, and the adults who support them, highlight the possibilities of peaceful collective action. Motivated by sadness and grief, fear and anger, these youths have channeled those feeling into something productive; as they put it, “Our anger in the face of gross injustice has led us to take action but it is the love of our people and our community that pushes us forward.” Their initial public statement eloquently addresses the many facets of the problems in Florida, and the rest of this country: “stand your ground vigilantism, racial profiling and a war on youth that paints us as criminals and funnels us out of schools and into jails.” But these kids refuse to back down. In fact, with Rick Scott refusing to even consider their demands, they are holding their own legislative session aimed at addressing what Florida’s leaders are failing to fix. When the system fails you, it is time to take matters into your own hands…peacefully. These young people are truly leaders. And while none of this can bring Trayvon back, or right the centuries of wrongs that black Americans have faced, it is a step in the right direction.

I hope that we can turn our national grief into momentum towards something better. I’ve heard calls for boycotts of Florida until the SYG law is repealed (and have friends calling for similar boycotts in their home states, which have similar laws). I’ve seen young people around the country sharing their stories, inspired by President Obama’s speech, reminding us of just how many young people could have been Trayvon. And I’ve seen many rallies and protests, supported and attended by people around the country. How can we maintain this movement? How can we build on it? And what can we, as academics, offer to ensure that we keep moving forward?

There have been some great posts on The Society Pages about Trayvon Martin, George Zimmerman, and the politics involved in this case. Here are just a few: The George Zimmerman Case: What Role Did Race Play?; Thinking about Trayvon: Privileged Response and Media Discourse; Wearing Privilege; Stand Your Ground Increases Racial Bias in “Justifiable Homicide” Trials; Who’s Afraid of Young Black Men?; Bodies in the Justice System