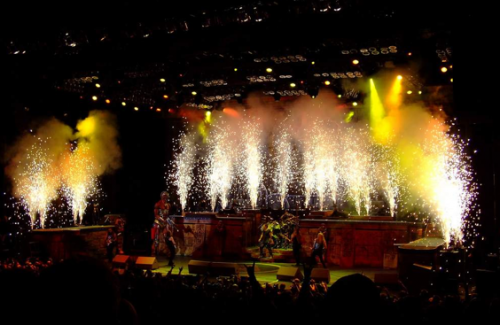 As a kid I loved heavy metal.  The overly bright, distorted anthem-like electric guitar solo.  The accompanying rhythmic pulse was reminiscent of a battle snare drum, a hallucination of a military march.  The drum roll and the introduction of the power chord, a series of musical intervals of a perfect fourth repeated over and over again.  When the vocalist entered the picture, singing at the lower end of his range and producing clear tones that were such a deep contrast to the tainted electric guitar chords that the emotional intensity of the song would be turned up a notch.  And just when I’d adjust to the cacophony of sounds, the singer would burst into a virtuosity of vocal jumps, which at times produced pitches so high in the vocalist’s falsetto that it is unclear if he is singing or screaming.

Despite my parents’ critiques, the emergence of heavy metal did more than produce a vehicle for headbanging; it changed popular music.  The lyrics of heavy metal addressed social problems such as discrimination and inequality. Youth crime was also connected to heavy metal.  For example, in the 1994 three teen boys were convicted of murdering three young boys in West Memphis, Arkansas.  During the trials, prosecutors highlighted the boys’ interest in the occult and heavy metal music.

In fact, heavy metal could be an extremely rich tool for exploring social issues – a goldmine for a sociologist.  And I was not the only one have this thought.  In 1999, Jarl Ahlkvist presented a unique multi-week exercise for using music in the sociology classroom, he had students take the entire musical genre and explain it as a cultural phenomenon.

In lieu of the textbook, Ahlkvist combined articles, monographs, and reader sections and used these readings to serve as guides for engaging in cultural analysis.  After taking about two class periods to lecture on basic concepts, sociological imagination, and symbolic interactionism, students began the cultural analysis of heavy metal music.  In an early in-class assignment, students learned to examine the multiple dimensions of any cultural product by moving beyond musical and lyrical analysis and looking at the visual dimensions of heavy metal music.  Students were split into small groups and asked to examine the visual imagery found on album covers and select common symbols.

Ahlkvist’s next objective was to illustrate the ways in which people and objects are rooted in specific social contexts.  Through lecture on the history of the genre and playing segments from various popular songs, Ahlkvist brought out key themes in various subgenres of heavy metal. Students were asked to use the internet to find material about specific heavy metal bands, lyrics, and subgenres and incorporate their findings in both class discussion and a short paper.

Students were also required to create an “ideal type” heavy metal fan using the data they collected from the internet as well as lecture material and earlier projects.  After creating this “ideal type” students had to explain why their profile was ideal.  Ahlkvist stated, “Once they see the correspondence between their ‘ideal-type’ heavy metal fan and the music as a cultural object, students realize that culture is like a tool kit, a resource from which people choose the ‘tools for living’ that help them make sense of their social experience” (Ahlkvist 1999:131).

I, personally, have always been interested in the gendered dynamics of heavy metal music and believe the genre could provide an excellent case study for studying gendered expectations in Western society.  From the early days, heavy metal has been asymmetrically gendered.  Performers and fans have been overwhelmingly been heterosexual men (Walser 1993).  The promotion of an exaggerated and idolized dominant, heterosexual form of masculinity is not surprising when taking into account the androgyny that also exists within the heavy metal realm.  Androgyny was especially prevalent during the 1970s and 1980s when heavy metal music peaked in popularity.  Male musicians and fans with long hair, make up and tight fitting clothes needed a mechanism to assert their masculinity and heterosexuality.  They found it in promoting a “sex-drug-and-groupies heavy-metal lifestyle” (Breen 1991).  This metal mantra was often at the expense of women and homosexual men, who were designated to the category of “other” and represented as a threat in visual images, lyrics, and video representations (Walser 1993).

Since the 1970s, women have increasingly gravitated towards the heavy metal scene.  Women who choose to participate, especially subgenres such as death metal or black metal that are more misogynistic, are aware of the culture of marginalization (Vasan 2011).  These women often report that the metal scene provides a sense of individual empowerment through breaking away from the gendered restrictions of mainstream society.   However, this freedom comes at a cost, which involves reframing empowerment through a masculine notion of legitimation.

Gender is only one of many lenses through which a sociologist could examine heavy metal.  Issues of race and class intersect with gendered dynamics in the world of heavy metal, as musicians and fans often come from white, working class backgrounds.  And the “relationship” between metal and deviance continues despite the lack of evidence to support there is any connection between crime, violence, and the heavy metal scene.

All this in one musical genre!  What an intriguing way of examining the social world.  Younger students might not find “Welcome to the Jungle” as musically unblemished as I do, but they could spice up discussions in a 101 class, and it speaks to numerous sociological issues including urban poverty, drug use, and violence.