The start of a new academic year is upon us and we are back to hectic days and endless nights. This year will be more busy than usual for me as I plan to defend my M.A. thesis in Sociology.  Anyone who has ever written a thesis knows how much work goes into it. As part of my venture through this exciting (yet very difficult) time I will be using some of my bi-weekly posts to highlight some of the sociological studies that proved particularly useful to me. Ideally, thesebooks would help those interested in transnational migration, gender, and activism.  I hope these posts help others through this process as well as stimulate interesting dialogue about the intersections of migration and social movements. The first of these reviews will follow with a short criqitue of LatinaActivists Across Borders. 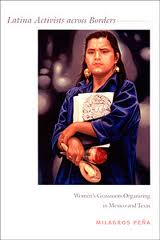 In her book, Latina Activists across Borders Women’s Grassroots Organizing in Mexico and Texas, sociologist Milagros Peña investigates the rise of NGO’s in Mexico and along the U.S.-Mexico border. Pena’s study is an important contribution to the literature on women’s and feminist activism, and a true testament of the hard work women activists have put forth to establish transnational networks. Penã draws on interviews with women activists to present a complex comparative study of thirty different NGO’s in Michoacán and the border towns of Ciudad Juarez and El Paso, Texas. The result of this comparison is a well-developed story that explains the commonalities, difficulties, and unique experiences among NGO’s in Mexico and along the U.S.-Mexico border.

One of the greatest strengths of this book is Peña’s critical understanding of the differences between Mexican and Mexican-American women. While she draws on the how communities in Michoacán, Ciudad Juarez, and El Paso share a cultural heritage and colonial legacy, Peña is very careful in presenting the diversity among these groups. She is especially successful in providing a rich theoretical framework that helps the reader understand how politics along the U.S.-Mexico border construct identities.

Drawing on Chicana feminist Gloria Anzaldúa, Peña writes that “Mexican and U.S.-Mexico border communities share a historical and political tapestry framed in U.S.-Mexico socioeconomic relations. Therefore in trying to under border-crossing activism, whether in Mexico or on the U.S.-Mexico border, I look to build on several notions that the Anzaldúa left us… ‘nosotros los Chicanos straddle the borderlands… deep in our hears we believe that being Mexican has nothing to do with which country one live in. Being Mexican is a state of soul- not one of citizenship” (2007:5).

Moreover, Peña points to the ways cultural context is important when studying present day politics. For example, her discussion on religion in social movements adds deph to our understanding of gender and religion.  The author notes the ways theology has shaped women’s perspectives and amounted to social mobilization in Mexico. As the author explains, women involved in religion developed critical ideas about patriarchy and gender subordination aiding to their critical understandings of gender inequalities.

In all, Latina Activists across Borders Women’s Grassroots Organizing in Mexico and Texas, is ideal for anyone working on the transnational women’s activism. What I appreciated the most about the book was its critical view of culture.  During a time where nation-state borders are being contested and challenged, Peña’s book underscores the ways people have learned to work together to challenge dominant views of gender and race.