The presidential debates have raised some interesting and important questions about gender inequality in the U.S. Specifically, the second debate (transcript) brought up the issue of fair pay and equal wages for American women. While Governor Romney’s response—which involved “binders full of women”—rightfully took a lot of heat, both candidates could have benefitted from a brief lesson in the sociology of gender discrimination. Perhaps their aides will pass this on.Gov. Romney’s answer focused on increasing women’s participation in the workforce...

What's missing from the debate over higher education funding?

For many people, from the first-year students traipsing around campus in search of the correct lecture hall to the senior faculty preparing to teach courses for the nth time, the beginning of the academic year tends to be frantic and exciting time. This year, when back-to-school coincides with a heated Presidential race, education and politics are bound to mix. President Obama has made access to higher education – measured primarily by greater access to grants and student loans while trying...

Celebrating Bin Laden's Death and the Return of the Knowable World

It is only hours since President Obama announced the killing of Osama bin Laden, resulting in celebrations across the United States (in the streets, on Facebook and elsewhere). I want to point the Sociological Lens at this spontaneous and widespread cultural celebration not to argue that it is wrong or right to cheer for death, but to ask, in these first few hours, why. Beyond the obvious points surrounding Bin Laden’s involvement with the events on September 11th, 2001, I think he symbolized...

"Hope" and "change" don't pay the bills – and for that, the democrats will pay

In the last presidential election, “hope” that Washington could be a less partisan and ultimately a less corrupt and more transparent place, coupled with a longing for “change,” propelled Obama into office. That, and an intense disappointment with the previous administration. However, the economic meltdown and the generally painful economic situation for a large number of Americans has lead even many Obama supporters to question whether anything is actually different and whether our president can be pragmatic and effectual in...

Fear as the Norm

Following heightened security concerns in Yemen as well as the failed Christmas Day bombing aboard a flight approaching Detroit, the Obama administration has opted to drastically increase security concerning all flights destined for the United States. According to the Washington Post, these new Transportation Security Association (TSA) measures include the physical search of all passengers who hold the passport of, are traveling from, or are traveling to a country on the Statement Department’s list of state sponsors of terrorism or...

Net Neutrality: Must Freedom Be Organized?

The first 25 years of → Internet governance began with technicians at the helm. The 1990s saw an emerging struggle over the US government’s escalating attempts to dominate the Internet. Initial opposition came from the Internet’s technical community, but later a number of national governments also began to challenge the US strategy. The European Union (EU) largely backed the US. While some issues were resolved by the mid-2000s, others were likely to stay contested for a considerable time. (Many acronyms, all explained below, were generated in this process.)When the term “Internet governance” was introduced in the 1980s, it was used mainly to describe the specific forms of the technical management of the global core resources of the Internet: → domain names, IP addresses, Internet protocols, and the root server system. The term “governance,” rather than “government,” signaled the difference between Internet regulation, mainly technical in nature and self-organized, and the legal regulation of telecommunications and broadcasting (→ Information and Communication Technology, Development of; Internet, Technology of).Internet pioneers rejected any government role in the emerging cyberspace. MIT’s Dave Clark proclaimed in 1992: “We believe in: rough consensus and running code.” Tim Berners-Lee (1998), world wide web inventor, insisted: “Our spiritual and social quest is for a set of rules

The Paradoxical Invocation of Humanity

nmccoy1 This week, Republican Congressman Terry Franks invoked humanist philosophy to simultaneously defend pro-life (anti-abortion) and question President Obama’s humanity and citizenship.  It would be laughable logic if this trend were not so prevalent and effective.  Franks called Obama an “enemy of humanity” referring to Obama’s decision to support international aid to organizations that perform abortions.  This invocation of humanist arguments in every abortion debate is particularly interesting when it is juxtaposed against almost uniform rejection by Republicans of public...

This post has moved to http://williampaulbell.wordpress.com/2009/09/12/comparing-the-role-of-government-in-self-control-problems-from-behavioural-and-neoclassical-economic-perspectives/ <About>  <Portfolio>  <Academia>  <LinkedIn>  <Twitter>  <Blog> Member of the World Economics Association – promoting ethics, openness, diversity of thought and democracy within the economics profession

Health care and emotions – the politics of preaching

By Dena T. Smith Since his inauguration, President Obama has used just about every forum possible to stress the need for health care reform. We’ve heard the pragmatic arguments: in the current system, we spend too much money on treatment rather than focusing on preventative care or that all the power is in the hands of private interests inflates costs. And we’ve also heard plenty of opposition to government intervention from the right. Two Tuesdays ago, I wrote about the...

by nathan jurgenson The old point that capitalism subsumes everything -even that which is precisely meant to be anti- or non-capitalistic- has been exemplified recently by corporations jamming the culture jammers by co-opting the jammer’s strategies. Culture jamming follows the Situationist (prominently, Guy Debord) tradition of challenging the status quo, including political and corporate structures. However, even these anti-capitalistic actions have been and still are co-opted and put to work under capitalism. This is nothing new. Previous literature tackled the...

by esminihan Debate over health care reform in the United States can be approached from various theoretical frameworks.  Economists tend to frame arguments for government intervention on the “externalities” associated with health care, or, the benefits to society as a whole that are not captured in the market.  These externalities range in nature from what could be considered practical (lower rates of communicable disease, greater mobility in the labour market) to emotional (feelings of satisfaction that members of society are...

The Strength of Racialized Institutions: Words from a "Black" President

One of the most interesting aspects of the reaction to President Obama’s comments regarding the arrest of Professor Gates is the focus on his race.  While clearly prompted by personal experiences, is it not also possible that Obama was simply voicing an opinion, not an opinion from a black President?  The New York Times article (see below) opens with the statement, “Americans got a rare glimpse Wednesday night of what is means to have a black president in the Oval...

by ishein1 Newly elected president, Barack Obama, held his first official press conference on Monday evening.  This historically rich press conference on the surface was isomorphous with press conferences of the past.  This fact was accentuated by the presence of Helen Thomas, currently a columnist for Hearst Newspapers.  As she has done for the past four decades, and despite attempts by President Obama to lighten the moment, Thomas asked her usual critical and pertinent questions.  Obama responded as most past...

Obama and the Spectacle in an Era of Diminishing Consumption

by nathan jurgenson Less Credit/Less Consumption Consumption is down. While this might be a momentary hiccup, it could very well be the case that Western societies will have to “reset” and pull back on consumption levels for a long time to come. Much of the consumption literature has pointed to Western conspicuous and hyper-consumption as an integral ethic of modern society. We have been consuming well beyond our means by relying on debt to fuel our consumer economy, an unsustainable...

Entering the New Frontier, There is no Turning Back

by ishein1 As the first week of Obama’s presidency passes, a top priority, set forth prior to his election, is to transform “the internet based machinery”, that helped him get elected, into an agenda setting tool.  The millennial generation tools within a new frontier of political interaction, i.e. social networking sites, like facebook, twitter, and YouTube are still in their embryonic form, particularly with regard to their impact on the political process.  It is clear, however, that if one wants... 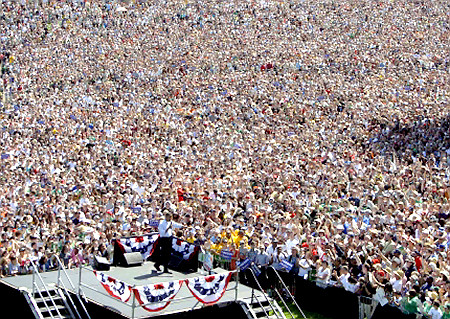 The Myth of the Bradley Effect

As the United States sits on the verge of electing Barack Obama the 44th President of the United States and the first African American to hold that office, many political pundits, members of the voting public and even some scholars believe that Senator Obama may have to overcome the “Bradley effect.”  The Bradley effect refers to a 1982 California Gubernatorial race where Democratic candidate Tom Bradley, an African American, was ahead in the polls beyond the margin of error and...