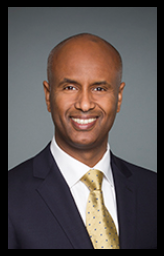 Ahmed D. Hussen is the Canadian Minister of Immigration, Refugees and Citizenship, the Member of Parliament for the riding of York South-Weston, a lawyer and social activist with a proven track record of leadership and community empowerment. Speaking with Howard Duncan, editor-in-chief of policy oriented journal, International Migration, he discusses the way Canada deals with immigration. This is a condensed version of a longer interview, which can be accessed here.

Why does Canada want to attract immigrants when so many other developed countries don’t and when many try to avoid migrants from entering their countries?

“Canadians broadly support Canadian immigration policy because they understand that our immigration is well-planned and executed in an orderly manner. We do have asylum seekers whose numbers fluctuate, which we cannot predict; but, overall, Canadians understand that their governments have traditionally been consultative regarding levels of immigration. Canadians, as well as governments,  also understand the contributions that immigrants make to our economy, to our social and cultural fabric, to our demographic challenges, our labour market needs, and skills shortages.

‘Geographically we are very lucky, having the luxury of three coasts and a friendly border with the United States to our South. We have a much smaller experience of undocumented arrivals than our American neighbours. By contrast, Germany had 950,000 migrants walk into their country in 2015. We don’t have that situation. Canada has, partly because of its geography, the ability to have a more planned and more orderly immigration system. The majority of those who come to Canada are skilled immigrants. Yes, we have our international protection obligations to fulfill through the refugee resettlement program and our system for those seeking asylum, but for the most part our immigrants are welcomed as economic contributors.”

Some criticize Canada for cherry-picking its immigrants at the expense of countries of origin who lose much-needed human capital from their economies and governance infrastructures. What is the truth here?

“Canada’s Express Entry selection system targets the best and brightest of the world to come as permanent residents. Those who use this program and become permanent residents tend to be from China and India, developed countries which do not suffer a brain drain from international migration. Those from less-developed countries that cannot afford to lose talent are in the minority, and the few that we receive are not a major problem for those countries. The charge is fair in principle, but is mismatched against our actual program. The migrants from countries of the Global South would move anyway as part of the global race for talent. We are doing what we can to fulfill the needs of Canadian employers who need workers at all skill levels, intermediate, low, and high. Canada’s population cannot provide all of the talent that employers need.”

‘Recently, a Member of Parliament reported to me the case of a large bakery that cannot find enough bakers to work in his shop. And I was not long ago in the city of Kitchener-Waterloo, at a round table of the high technology community, and learned of a shortage of 3,600 highly-skilled people in that corridor alone, people who they need there right now. If you multiply that by 5 years and include the shortage of people for manufacturing jobs in highly developed factories in the Kitchener-Waterloo region, they will need 216,000 people. Without immigration, they will not be able to expand or may even need to shut down. Having immigrants come to Canada to lend us their talents and skills actually creates jobs for Canadians and contributes to our prosperity. This is something that you see every day across this country.”

Regarding the global competition for talent, how does Canada compare itself to its nearest competitor, the US (eg comparing the US approach of employer-driven H1-B visa program and the Canadian government selection of skilled workers)?

“The competition for talent is real and we cannot afford to be complacent. Both government and employers select for skills in Canada, in fact. Our Start-up Visa Program aims to bring promising start-up entrepreneurs to Canada and to scale up here. We do the marketing and outreach, but the designation of those promising start-ups is done by venture capitalists and their associations. We provide the permanent resident visas and immigration support, but the selecting of the immigrants is led by the private sector.

A new immigration pilot program offers the four Atlantic Provinces 2000 applications in total, plus their families. Selection is done by the employers who also provide a settlement package for the newcomers. This program involves a lot of liaison between the provincial governments and the federal government.

Additionally, we are rolling out a Global Skills Strategy which will include a program led by private sector and academic institutions. Our aim is to get high skilled labour here fast, and some high skilled individuals and academic researchers here temporarily and to exempt them from the requirement of having a formal work permit. Our goal is a 2 week processing time, which will make this program extremely competitive. Again, the selection of the individual immigrants will be left to the provinces, the private sector, and academic institutions.

We are working closely with the private sector. They have the institutional knowledge to identify promising highly skilled individuals and promising start-ups. The Government has a lead role in the Express Entry program to select federal skilled workers, but the provinces have a lead role in the Provincial Nominee Programs across the country, where the designation of individuals for immigration is done by them.

But even with the Express Entry point system, we hold consultations with industry and other stakeholders to get the selection criteria right, and the program is much stronger as a result. Overall with regard to the selection of highly skilled immigrants, the private sector leads in some programs and the government leads in others. We use a mix of both. The aim is that those we bring to Canada fulfil our need for skills as identified by the industry and other institutions of our society.

Some argue that multiple migration has become the new norm replacing the historical tradition of permanent one way flows. We understand roughly 500,000 Canadian citizens are in China, marking another aspect of the competition for talent and constituting a brain drain from Canada. How does Canada try to retain the skills that immigration program brings in the current context of a global fluidity of migration?

Canada is a very attractive destination for our newcomers. We offer an open society, a democracy that follows the rule of law, and we have a welcoming attitude. Our immigration system would simply not have worked as it has done without the welcoming attitude of Canadians. This is a big piece of the solution to retaining talent. But this is an ongoing challenge and the Government of Canada continuously re-examines our immigration programs to maintain our attractiveness. We are emphasizing faster processing times for immigration, for citizenship, for passports, for family re-unification and other matters important to our newcomers, such as making it easier for them to bring their families over for visits.

We do understand that people will move around, but we want them ultimately to come back to Canada.

Many of the countries of origin for Canada’s immigrants are rapidly developing and now are able to offer good and high-paying jobs in the homeland. This must make it more difficult for Canada to retain its highly-skilled immigrants.

Again, Canada offers a very open society, the rule of law, democracy, an appreciation of diversity that continues to increase, and our education system is second to none. Immigrants have due process according to the law, as well as freedom of expression, assembly, and religion. We are lucky in this sense which is why we remain a destination of choice.

Since your government came to power, Canada has received a lot of attention over how it resettled 40,000 refugees from Syria. This attention has come from other countries, from the United Nations, and has resulted in a partnership with the Open Society Foundation to promote this approach to refugee resettlement. And now the United Nations has launched a process to establish a Global Compact on Refugees. What does Canada want to see in this Compact?

For starters, we want everyone to sign this new Compact to advance the world-wide recognition of the rights of refugees, to facilitate and implement those rights, and to assist in the protection of refugees and others in need of protection. Canada wants countries to understand that there should be more responsibility-sharing for the protection of refugees. We are sharing our best practices and our Private Sponsorship of Refugees model is attracting attention from a number of countries including Germany, the United Kingdom, Brazil, Argentina, and Chile. I understand that ten African countries and Honduras are engaging in pilot programs with the United Nations on refugee resettlement. We are also collaborating with the United Nations, the Open Society Foundations, the Radcliffe Foundation, and the University of Ottawa in informing the world of how the Private Sponsorship of Refugees model works.