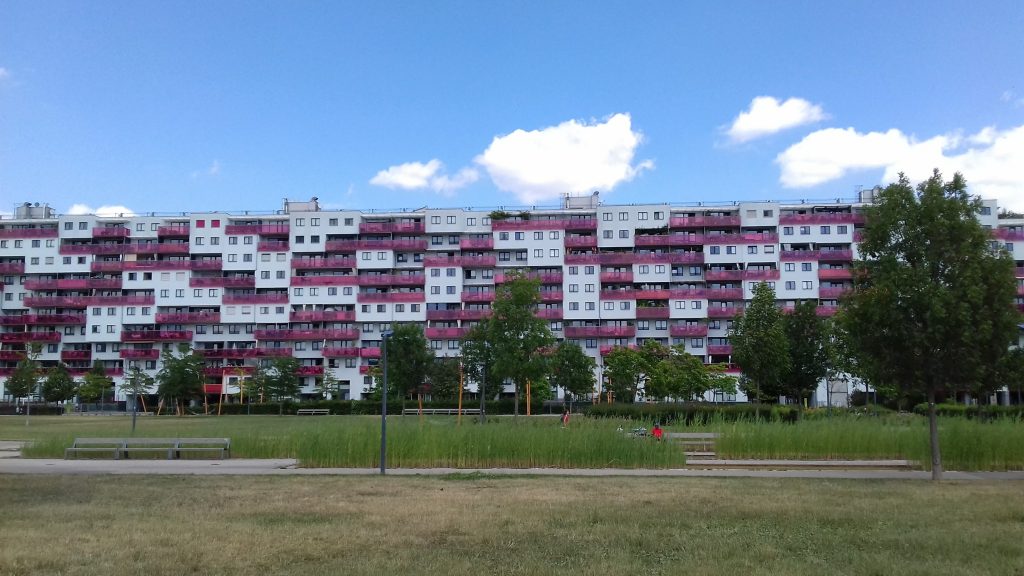 In 2015,for the first time, there were significantly more single-households in the European Union than any other household type. As such, living alone has become the most common way of living across the EU. But why is this important? The rise of single living has important implications, not only on the number and the type of homes needed but also on the provision of housing-related services, including health or social care. The rise of single-households also creates new or different demands on shared facilities and spaces.

Changes in household formation and household types are nothing new and have been happening in various forms in previous decades and centuries. For today’s context some of the key sociological transformations impacting on the rise of single-households in Europe include the individualisation and de-standardisation of life-courses, changing patterns in family formation, the changing demography and ageing of European societies as well as the continuing urbanisation and the financial ability to actually live alone.

To begin with, let me clarify what we actually mean with a single household. According to Eurostat a single-person household includes those who are living alone in an individual, separate housing unit. This definition also includes cases where people live independently with others, for example as a lodger or in a separate room.

As per the latest available figures from Eurostat (2015), almost one in three (32.3%) of all households in the EU are single (one person) households, which represents an increase of 2.3 percentage points since 2007. This figure significantly surpasses the number of two-person households for the first time in history. Importantly, over the same time period, also the proportion of two-person households has increased, from 30% in 2007 to 31.3% in 2015. In fact, these two household types are the only two that have seen an increase in recent years, and now account for almost two thirds (63.6%) of the entire population of the EU. 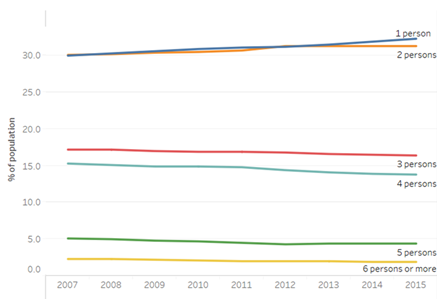 Distribution of households in the EU by size
Source: Eurostat, ilc_lvph03, analysis author’s own

Looking at the rise of single-households across the entire European Union, we see that there are large variations as to the extent to which this shift has occurred, both in terms of geography but also in terms of socio-demographic characteristics. There are five key trends emerging across the European Union:

Given that the trend to single-households is unlikely to be reversed in coming years, these findings pose some important questions in relation to housing. Are existing homes suitable and, crucially, are they affordable for the growing number of single-households? This is a particularly pressing question in urban areas given the housing crisis experienced in many European cities and the rising housing costs both for renters and the growing number of people being priced out of home-ownership. The crisis has already impacted on how people live, especially on younger generations. For the context of the UK for example we have seen an increase in younger people who continue living with their parents for a longer time than they previously did.

The growing number of single-households not only poses questions as to the actual living spaces but, importantly, for the provision of communal and shared spaces, both within a residential context but also for public spaces. As Eric Klinenberg has argued many single-person households are choosing to live alone and, rather than seeing it as a form of social isolation, those living alone often have more active social lives and as a result higher demands of places and spaces where they can meet others.

These questions are however not only important for those already living alone but also for generations to come. The ageing of European societies will mean that a growing number of single-households will be occupied by older age groups, many likely to be in need of homes that are adaptable for old age. It will also impact on the provision of social and health care. This will be particularly important in order to maintain independent living among older single-households, who may not be able to rely on social support from family or friends.

Crucially, as the key trends have highlighted, these changes are not occurring to the same degree in all European countries and will have different implications in each national or regional context. Most importantly, however, single-living should not be seen as a deviation from a norm but rather as what it has become, that is, the predominant way people today live across the EU, be it out of choice or necessity. Housing policies need to reflect and respond to this social change.