The State and My Happiness: Youth Mental Health, Citizenship Education, and Discursive Contestations in Contemporary Indonesia 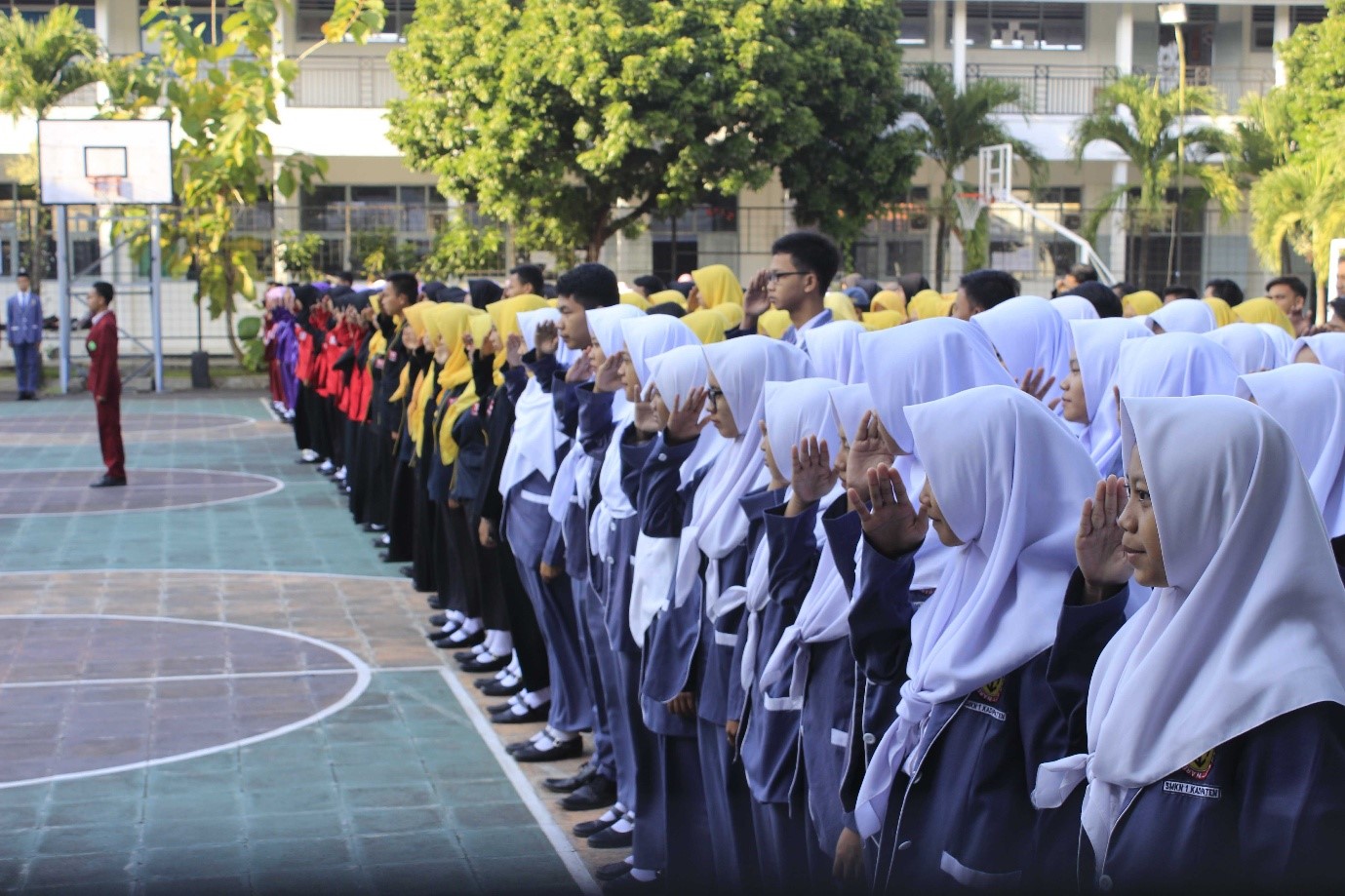 A scene of Monday flag ceremony in an Indonesian school as a patriotic legacy of the authoritarian military regime. Attribution: Rian Aryandani, CC BY-SA 4.0 via Wikimedia Commons.

In 2015 we all sighed a sigh of relief when mental health was eventually included in the Sustainable Development Goals – Goal 3 to be precise. Conveniently, the World Health Organisation also offered a concise definition: The World Health Organization (WHO) defines mental health as ‘a state of well-being in which the individual realizes their own abilities, can cope with the normal stresses of life, can work productively and fruitfully, and is able to make a contribution to his or her community’ (WHO, 2018, March 30, para. 2). This all seemed straightforward. Yet, what happens when a state has a fairly precise idea of who you have got to be – as an individual and citizen – in order to enable you to ‘make a contribution’ and, thereby, to become a valued member of society? Enter Indonesia.

As the home of the world’s largest Muslim population, Indonesia’s official state ideology position the country– not as an Islamic or secular state, but – as a religious, Pancasila-based country (Intan, 2006). Pancasila consists of five principles, namely, (1) belief in one supreme God, (2) humanity, (3) unity, (4) democracy, and (5) social justice. Holding together an extraordinary diversity of cultures, languages, ethnicities, and religions, Pancasila (and its popular slogans such as ‘unity in diversity’) provides an ideological framework for a democratic, multicultural, and tolerant citizenship (Parker & Hoon, 2013). Nevertheless, the first two leadership regimes, Soekarno (1945-1965) and Soeharto (1966-1998), have appropriated and used Pancasila as a platform to maintain their political power in ways that are not necessarily either multicultural or tolerant (Uebadillah, 2018). These citizenship ideals were enacted through Pancasila citizenship education and additional compulsory training for all secondary and tertiary students. Imbued with a strong sense of nationalism, patriotism, and militarism, these programmes expected students to comply with a single interpretation of Pancasila and wholeheartedly support the regime with a sense of duty (Uebadillah, 2018).

Soeharto falls in 1998, citizenship education is now oriented towards democracy, human rights, and civil society (Jackson & Bahrissalim, 2007). Democratic reforms have gone hand in hand with a neoliberal trend, particularly felt within the education system. In education, this led to the decentralisation of educational management and finances, vocationalisation of secondary education, internationalisation and marketisation of specifically selected schools, and the strengthening of audit culture through accreditation mechanisms (Mappiasse, 2014). To ensure compliance, the performances of students, teachers, and schools have been increasingly measured, quantified, and standardised through a meticulous system of accreditation. The high-stake, standardised National Examinations (Ujian Nasional) in Year 6, Year 9, and Year 12, for example, have put immense pressures on students, teachers, and schools to achieve the minimum requirements of performance. In education policies, such demands were often justified using neoliberal rhetoric, like for the sake of Indonesian human resource competitiveness in the global economy (Wijaya Mulya, 2016). The ideal young generation is ambitious, competitive, hardworking, and ready to face any demands given by their employers/authorities. There is very little scope for mental health as a result.

Within such pressures to perform, mental health is hardly a part of the current Indonesian curriculum. Health and Physical Education, for example, overwhelmingly focus on physical health and physical and psychological development, without any mention of mental health. School counselor guidebooks are mainly underpinned by normative developmental psychological approaches. For instance, among ten main developmental tasks stated in the Junior High School Counselor guidebook (2016, p. 13), almost none are about students’ mental health, but rather, about – among others – being religious, behaving in a socially acceptable way, confirming gender roles, and preparing for a future career. Compliance to these developmental norms are positioned as the ideals for Indonesian youth, encouraging them to pursue economic success, social integration, and societal stability. Personal happiness or meaningful personhood beyond the dominant social norms are not touched upon. In our recent Children & Society paper, we identified this as a form of (masculine) patriotism, in which the ideal(ised) young citizens are constructed as dedicated to the country, having a sense of pride in being an Indonesian, ready to fight and sacrifice everything for the country, and contributing to the nation through individual achievements. Citizenship textbooks for secondary school focus on the obligations of citizens to defend the nation, serve, and sacrifice for the country. Most cited examples include stories of heroes who died fighting for independence and Olympic medal-winning athletes. In the context of education, patriotism like this translates into submission to school authorities and a sense of pride in striving to achieve achievements in competitions. The image of the ideal young generation here is that they are tough, put aside their personal interests, and are ready to fulfil the calling or demands of the school and the nation. Teenagers who are soft-hearted, good at reflecting on their feelings, caring for their own happiness and mental health become incompatible with the masculine patriotic ideal. Considering this, it was not surprising that students did not mention seeking help from teachers when asked about their coping strategies, but instead, ‘keep everything inside’, ‘try to forget’, ‘listen to music’, ‘watch motivational Youtube videos’, and ‘find something else to do’.

The final key discourse we consider here is one of (religious) moralism, in which the ideal(ised) young citizen is defined as morally obedient, piously religious, and respectful of hierarchical social relationship. Instead of critically questioning oppression and injustice, the younger generation is expected to obey and participate in maintaining the moral order centrally produced, for example reporting their friends who violate school rules. Religious rhetoric also wraps these ideas in Citizenship textbooks; as if implying that absolute obedience to the rules follows divine will. This is exacerbated by the context of paternalistic educational relations; the teacher is positioned as a noble and authoritative figure, students have almost no room to question. We argue that such discourse and its manifestations in educational (and family) contexts does not only contradict ideas espoused by the discourse of mental health like respect for personhood and individual freedom, but also perpetuate forms of paternalistic relationship between youth and adults, which can be detrimental to youth mental health.

There are three elements to take away from these considerations. First, mental health promotions need to expand to consider religious-cultural-educational contexts within which youth mental health problems exist: the individual level is just the tip of the iceberg and effective strategies for intervention and prevention need to engage in more depth. Second, the the younger generations are ideally positioned to critically re-politicise mental health: mental health sufferers are not only “patients who need to be healed”, but victims of structural and ideological injustice: becoming an activist for example, or relying on peer networks to work towards mental wellbeing, can be therapeutically liberating, and may enhance a sense of community and belonging that neoliberal narratives have devalued. Last, current global approaches to mental health are presented as de-politicised but are inherently Western, and therefore tend to reproduce – at least in part – a colonial narrative. Our work has evidenced the key role played by local religious and cultural wisdom in advancing and questioning the concept of mental health. Localising mental health does not need to detract from biomedical advances, but can be a resource to ensure the uptake of biomedical responses.

Teguh Wijaya Mulya is a senior lecturer in the Faculty of Psychology at the University of Surabaya, Indonesia. He specialises in critical research in the areas of sexuality, gender, religion, youth and neoliberalism in education. His work is inspired by the work of Michel Foucault, post-structuralist feminism and discourse theories.

Francesca Salvi is a sociologist of education focusing on transitions between childhood and adulthood. Her research looks at how global discourses construct teenage as deficit within the opposition of education and parenthood. More recently, she has started to consider the disconnect between global and local discourses of mental health in relation to young people in Indonesia.

Paul Gorczynski is a chartered psychologist and associate fellow of the British Psychological Society. He specialises in mental health promotion in clinical, educational and elite sport settings. Paul has helped write consensus and expert statements on mental health for the International Olympic Committee and The British Association of Sport and Exercise Sciences.

Tanya Wells Brown is a public health specialist and Dr. Public Health Candidate at the London School of Hygiene and Tropical Medicine. She specialises in gender-based violence, in particular the integration of GBV protocols within health systems, and adolescent sexual and reproductive health. She consults with UN Agencies and the US Agency for International Development.