Are all neoliberalisms equally bad for your health? 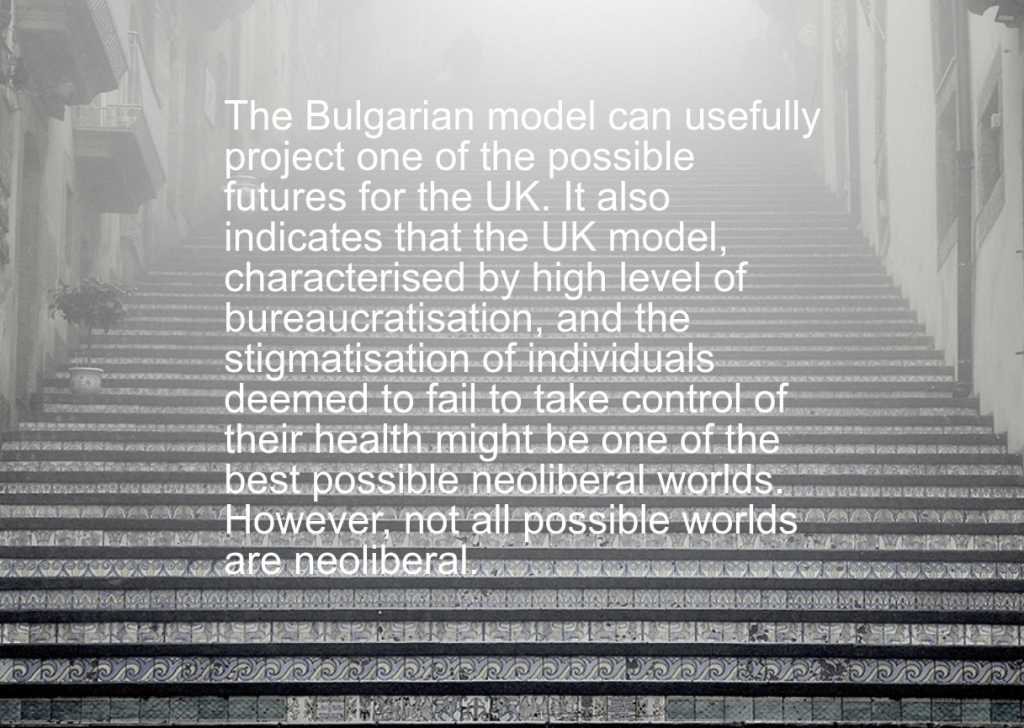 There is evidence that the shift from social democratic to a neoliberal consensus in modern welfare capitalist states has restructured the contexts in which health practices are enacted. Neoliberal policies are being characterised by an emphasis on increasing individual responsibility, consumer choice, the privatisation of public resources and introduction of market regulation, and linked to growing social inequalities and worse health.

When we turn to chronic illness, and chronic illness management (‘CIM’), these growing inequalities can be posited as a structure that affects people’s life-chances. Additionally, this is taking place in a context where taking personal responsibility for one’s health, and the stigma attached to failing to do so, has become a moral imperative.

Neoliberal policies have been implemented to various extents across Europe, shaped by different processes and concerns. At the macro-level, processes are implicated in shaping individual capacities and dispositions in chronic illness management, and in the environments within which self-management support practices take place.  However, despite the increasing global dominance of neoliberal ideology, concrete forms differ across countries. So, could it be that the experiences of living with a long-term condition differ across neoliberal regimes? And are all neoliberalisms equally bad for people’s health? Such differences are likely to be illuminated by developing a cross country study design.

In this recent paper  (free to  access until 27th October 2017) we compared Bulgaria and UK, two countries that were enthusiastic adopters of neoliberal reforms, but followed different trajectories. In order to compare the experiences of CIM in these two countries, we analysed 60 semi-structured interviews with people with type-2 diabetes.  We found that the type of neoliberal changes introduced in the two countries varied and their articulation was co-shaped by different contexts and histories.  The narratives of UK respondents were framed within a discourse of individual responsibility, while in Bulgaria, the lack of resources dominated discussions, which were seen as a system level problem and unrelated to individual responsibility, capabilities and choices.

The UK has adopted neoliberal policies relatively slowly over a 40 year period and health and levels of welfare expenditure remain close to EU averages, with universal access to healthcare at the point of need and low level of private expenditure on medications and health services.

What we call ‘logic of managed choice’ in the UK is characterised by state involvement operating with significant levels of bureaucratisation monitoring the control of cost and quality, surveillance, and the emphasis on taking personal responsibility for one’s own health and resource use. This implies the presence of a high degree of patients’ trust in professionals;  an arms-length relation between users, prescribers and the producers of medications.

By contrast, the process of neoliberalisation in Bulgaria has been far more rapid and comprehensive moving from a socialised models of health care delivery to a privatised system. Over a 20 year period Bulgaria has moved from a socialist country with close to 100% state ownership, a near absence of capitalist market relations, and free access to healthcare for all, to having some of the smallest public sectors, lowest levels of state expenditure, and most austere economic policies in Europe. At present, a quarter of the working age population in Bulgaria does not have health insurance.

The Bulgarian version of neoliberalism can be described as logic of unmanaged consumerism where the regulatory and redistributive role of the state is minimal. This is associated with close links between health professionals and pharmaceutical companies, maximum prescription and costs passed to patients (with private expenditure on medications five times higher than in the UK in real terms), minimum levels of trust between all stakeholders, and high pressure on health consumers to develop effective strategies of navigating the market as a necessary (but not sufficient) condition for accessing reliable support from healthcare professionals.

Our study demonstrates that comparisons of national contexts are complementary to sub-national comparisons as they offer additional insights into the mechanisms and pathways by which macro level processes impact on people’s experiences of long-term condition management. Our findings indicate that while all neoliberalisms are bad for people’s health, some forms (such as the Bulgarian version) are worse than others.

The Bulgarian model can usefully project one of the possible futures for the UK. It also indicates that the UK model, characterised by high level of bureaucratisation, and the stigmatisation of individuals deemed to fail to take control of their health might be one of the best possible neoliberal worlds. However, not all possible worlds are neoliberal.

We need to move away from neoliberal models of thinking in order to achieve a structure which supports CIM and reduces social and health inequalities.