Less is More: Political Ideology and the Paralysis of Progress 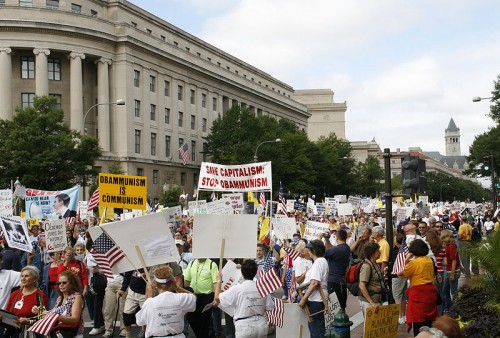 On March 13, CNN covered the genesis of another grassroots political movement in the United States. The Coffee Party –an obvious play on the vocal Tea Party which found its way into the headlines last summer- touts itself as a group of concerned citizens who are tired of being divided and anxious to be heard.

CNN reported that leaders of the movement, which began on Facebook, held between 350 and 400 events on the 13th. For now the members seem to agree that there is an elusive “something” wrong with the American political process and the way it operates. Party founder Annabel Park told CNN, “We don’t feel represented by our government right now, and we don’t really feel represented well by the media either. It’s kind of a simple call to action for people to wake up and take control over their future and demand representation.”

The article points out that this grievance is not unlike that of the Tea Party. However, for now it does not seem likely that we will see significant cooperation between the two. In response to the burgeoning movement St. Louis Tea Party member dismissed the Coffee Party saying, “It’s driven from the top down and it’s not a grass-roots movement driven from the bottom up.”

The growth of the Tea Party and Coffee Party, as well as their reaction to each other, seems to indicate that while there may be a severe problem in communication, it may not be isolated to Washington. In “Political Position and Social Knowledge,” published in the most recent Sociological Forum, authors John Martin and Matthew Desmond explore the deeply entrenched political ideologies of the United States and ask, “When citizens develop a ‘political ideology’ what does this mean and what do they do with it?” The y point out that political ideology – defined for this purpose as “people’s self-placement on a dimension on which persons can be arrayed from left to right”- is often a form of social ontology. This means that it is not that liberals and conservatives are looking at the same thing, applying their respective values and reaching different conclusions, but rather they are seeing two completely different things from the outset.

Rather than simply discuss ideology versus information, Martin and Desmond find it more constructive to distinguish between knowledge of the political system (i.e. what the political parties stand for and how certain political actors have performed in the past) versus beliefs about the nature of the world. They argue that once a political ideology has provided an individual with a fleshed-out social ontology the more politically sophisticated they become, the easier it is to abandon analysis. Meaning that people are able to form opinions based on what kinds of knowledge about the social world help their position; thus lending them more of a “filling-in of the world” than a world view.

Unfortunately, while the Tea Party and the Coffee Party indicate a significant desire to be heard, they do not show a strong compulsion to hear. The difficulty lies in that while we must band together to give our voices strength, when we clamber under such large tents we begin to lose the nuances which create real conversation.

Read “Coffee vs. Tea: A political movement is brewing” on CNN.com