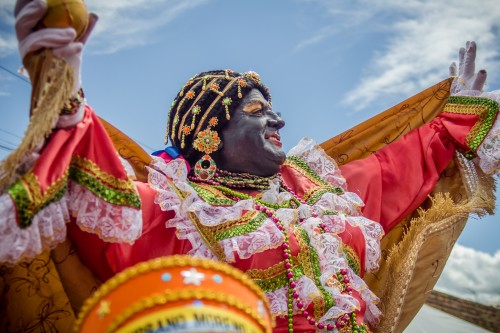 I remember a piece by Jon Stewart on The Daily Show from a few years ago where he asks his Senior Black Correspondent (Larry Wilmore): ‘Is blackface ever ok?’ the correspondent responds ‘No!’ and gets up to leave. When he is asked for a longer answer Wilmore says ‘Noooooooo!’. Then, when pushed further he states that ‘Blackface is part of a long history of mocking and dehumanizing black people while appropriating our culture. Here is when blackface is ok, when you have a black face!’ Nonetheless, stories of people painting their faces black in an attempt to be ‘funny’ keep popping up. Take for example this couple who though it was appropriate to dress as American Football player Ray Rice and his wife Janay, a victim of domestic abuse, for Halloween or this photo of British Prime Minister, David Cameron, with black faced morris dancers that caused controversy last month.

It seems obvious to me that blackface is a bad idea. Even where it is not intended to depict a person of African descent (as with the morris dancers), the contemporary and historical context is just too sensitive. It is for this reason that I found Mama Negra such a difficult thing to get my head round.

The Mama Negra Festival in Latacunga, Ecuador is one of the most important events in the country’s cultural calendar. It is a brass-band and moonshine fueled parade of thousands of people dressed in weird and wonderful costumes that represent various personajes (characters) including the El Angel de la Estrella (the Angel of the Stars), Los Huacos (brujos or witches), El Capitan (the Captain) and the guest of honour; La Mama Negra (the Black Mother). The festival is intended to thank the Virgin of Mercy (a particular depiction of the Virgin Mary that protects Christians from danger under her cloak), for allowing the town to survive the eruptions of the nearby volcano: Cotopaxi.

There are a lot of things about this festival that could be seen as inappropriate. People carry the carcasses of disemboweled pigs adorned with dead chickens, packs of cigarettes and bottles of spirits, which are meant as an offering to God (or the gods, depending on who you ask). There are hundreds of men and boys in elaborate drag who walk around whipping the men in the audience and offering them aguardiente (moonshine). The Huacos surround you in groups of four or five and cleanse you in the name of the Shamans (who share the names of the mountains that surround the city), but the cleansing is not what you might expect. It involves being rubbed all over with antlers and eucalyptus leaves, while the Huacos blow cigarette smoke and spit bursts of aguardiente over the person being blessed. 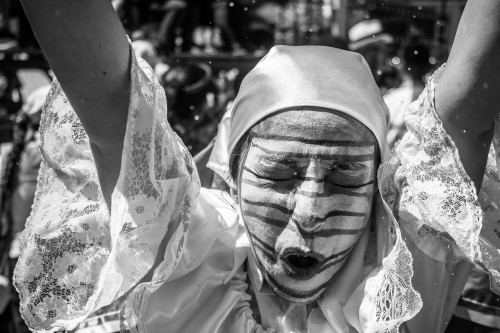 But the most awkward thing, for us westerners at least, has to be proliferation of people in blackface, particularly La Mama Negra. This character is meant to represent the Virgin of Mercy and is always played by a man, usually a wealthy or influential person from Latacunga, who dresses in elaborate drag, rides a black horse, carries the Mama Negra doll and whose face is entirely ‘blacked up’.

The exact reason for the black representation of the Virgin isn’t really known. The festival itself is such an unusual mix of pre-Columbian/indigenous, post-colonial/catholic, and afro-Ecuadorian traditions, and has been changed and adapted so many times over the years, that the meaning of each individual part is little understood. It seems that the Mama Negra was added to the festival at some point after the arrival of black people as slaves in Ecuador, who were brought to the country to work on plantations and silver mines.  Though, curiously, there have always been very few black people in the town of Latacunga.

Weismantel (2003, pp. 338-339) discusses the racial and sexual implications of the strange Mama Negra tradition noting, for example, that the water balloons used to enhance the breasts and buttocks of Mama Negra overtly sexualize the black mother figure, which echoes the local cultural norm of representing non-white (particularly ‘Chola’) women as physically less attractive than white women while also fetishizing them for their supposed sexuality and maternal instinct. Oddly, though, the Mama Negra icon is associated not with a white/mestizo image of a black woman, but is instead sponsored by the indigenous women of the El Salto Market in Latacunga. These women, who are themselves indigenous or ‘Cholas’, hire the performers and musicians and buy the costumes for the parade. Thus, rather than see the Mama Negra as an offensive caricature of a black woman, it is also possible to see her as a symbol of ‘the imaginary opposite of what is white’ (p. 340).

After going to the festival, I decided to try to find some information about what Afro-Ecuadorians think of the it or if there were any people or organisations that were opposed to the representation of black people (particularly black women) in the parade. I was surprised that I was not able to find very much at all. I wonder if this means that Mama Negra is truly seen as inoffensive or even as a positive part of Ecuadorian culture, or if it is because Afro-Ecuadorians are just not in a social or economic position that allows them to voice their opinion.

Certainly, the political voice of black people in Ecuador has historically been limited by poverty; in 2001 73.8% of the Afro-Ecuadorian population were unable to satisfy their basic needs (Sánchez, 2005, p.12). And, though poverty (measured by income) among Afro-Ecuadorians had reduced to 42.9% by 2009, this was still significantly higher than white or mestizo populations (26.3% and 32.7% respectively) (de la Torre & Sánchez, 2012, p. 142). However, as I noted earlier, Mama Negra is not a representation of a black woman that has been created by the dominant white and mestizo population, it is instead imagined and propagated by one of the most marginalized groups of people; indigenous women. 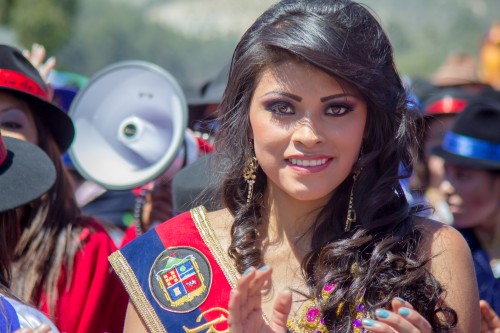 Indigenous populations experience even greater levels of poverty than Afro-Ecuadorians, estimated at 68.2% in 2009 (de la Torre & Sánchez, 2012, p. 142), and cannot really be seen as oppressors of black people in Ecuador. Moreover, the choice to represent the Virgin Mary as a large black woman, rather than the typical Christian image of a slim, young, white woman can perhaps be seen as a rejection of white colonial gender ideals, rather than a negative portrayal of black people. When compared to other female cultural icons in Ecuador, such as the Chola Cuencana who is held up as the archetype of the non-white Ecuadorian woman and is arguably a product of ‘imperialist nostalgia’, or the winners of the numerous beauty pageants across Ecuador (who are almost exclusively white or mestizo), Mama Negra is an affront to the white colonial sensibility. As Weismantel (2003, p. 340) notes-

‘If the Chola Cuencana of elite fantasy is a white and feminine figure, carefully held at a distance as an icon and only brought close in the sexual fantasies of predatory men, the Mama Negra is her antithesis. In making her big, black and masculine, market vendors distance themselves from the unwanted image of non-white women as the passive degraded object of sexual predation. In their self-invention as the manly mother of Latacunga, the city’s vendors represent themselves as generous enough to succor the entire city – and baby Jesus to boot – but only on their own terms.’

This post is definitely not intended to justify the use of blackface in societies where black people have been systematically abused and marginalised by white people for centuries. It is also not written with the intention of defending the Mama Negra tradition. It is just a personal reflection on what, at first, appears to be a simple question, but turns out to be a little more complicated. The Mama Negra festival was a fun and interesting (albeit rather bizarre) cultural experience for me. And though I don’t think that Mama Negra is intended to mock or dehumanize black people, I (as a white man) am not in a position to decide if blackface is ever ok, even if it is being used by a marginalized people in reaction to white colonial history.