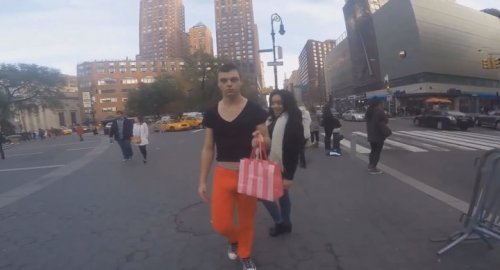 Over the last two weeks two videos have repeated shown up on my social media pages: “10 Hours of Walking in NYC as a Woman” and “3 Hours of Walking in NYC as a Homosexual.”  Both videos aim to illuminate the often unnoticed topic of street harassment.   And both videos clearly illustrate what day to day life is like for some women and gay men.  However, it is important to frame both videos within the context of location, race, class, and presentation.

“10 Hours of Walking in NYC as a Woman” was created as a collaboration between Hollaback and Rob Bliss Creative, a video marketing company.  In the video, actress Shoshana B. Roberts dressed in jeans, black t-shirt, and tennis shoes walked through various Manhattan neighborhoods recording the actions and comments of men she encountered with a hidden camera and microphone.

Throughout the walk Roberts recorded over 100 instances that were coded as verbal harassment, which ranged from friendly greetings to sexualized remarks about her body.  The recently release YouTube video, running slightly less than 2 minutes, is a collection of a variety of Roberts’ experiences throughout the ten hour exercise.  The video went viral immediately and received a large amount positive publicity as well as numerous negative responses, including threats of rape directed towards the actress.

The response to the video, clearly illustrates the importance of talking about street harassment and the fear of violence that are a daily part of many women’s lives.  However, a number of additional social issues are imbedded in the video and should be addressed in the context of this experiment.  Race and class are two important elements of the video that are not addressed.  The largest proportion of the men presented in the video are minorities.  In addition, in a number of instances the men commenting at Roberts were standing against buildings, resting on fire hydrants, or sitting on folding chairs on the sidewalk, postures frequently used to characterize lower class and unemployed men.

Location is also something to consider when viewing the video.  It would be interesting to know where Roberts received the most harassment.  Would the coding of harassment be different if Roberts walked the streets of a small Midwestern town where strangers frequently greet each other in public?  Are we more likely to code seemingly innocuous comments such as “good morning” as harassment in a place where people are supposed to keep to themselves and not interact with one another?

In response to “10 Hours,” DennisCeeTv produced a similar video, “3 Hours Walking in NYC as a homosexual.”  In this video, a young man walked throughout the city dressed in tight red pants and a black crop t-shirt carrying a signature striped pink Victoria Secret shopping bag.  The young man in “3 Hours” endures significantly more blatant harassment as he walks the streets of New York by both men and women.  He is called a “faggot” numerous times.  He is propositioned by another man for sex.   He is physically touched by strangers.

The video clearly illustrates the struggles of non-gender conforming men.  Once again those addressing the young man are overwhelmingly individuals of color.  The first response shown in the video is a group of women of young women of color who shout “Nice bag” to the young man.  The video does show an older white woman who turns around and look the man up and down.  However, the calling, touching, and proposals all come from individuals of color.

Another issue that should be addressed in the video is the man’s clothing.  Although, there is NEVER an excuse for harassment or violence, the choice of the cropped shirt and Victoria Secret shopping bag create a stereotypical notion of what “kind” of gay man is harassed on the street.  One interesting observation is that the majority of people in this video are wearing coats, hoodies, or sweaters.  Thus, the man’s cropped short sleeve shirt seems even more out of context in the environment.  For this young man, harassment appears to be deeply linked to the presentation of identity.

Both these videos illustrate the challenges women and gay men can face in day to day life.  They are both important tools for examining harassment, discrimination, and inequality.  However, they also both illustrate the ways in which we view race, class, and sexuality.  A good comparison would be to explore how harassment continues to unfold in spaces among the privileged, illustrating that harassment is not confined to the streets but frequently exists in many facets of individuals’ daily lives.

Flske, Susan T., and Peter Glick. “Ambivalence and stereotypes cause sexual harassment: A theory with implications for organizational change.” Journal of Social Issues 51.1 (1995): 97-115.