The Good and Bad News about HIV Infections 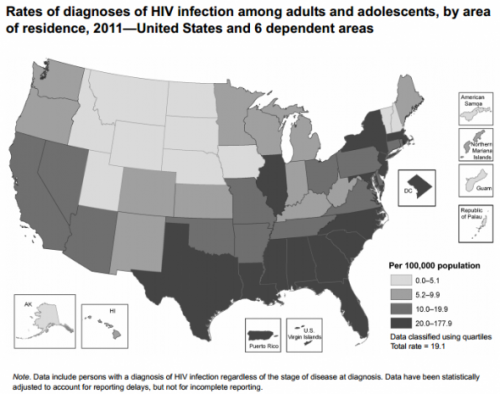 This week, great news emerged out of Mississippi: an infant, previously infected with HIV, has been cured of the virus. This development indicates promise for the future. We have now entered an era with the possibility of curing a once incurable disease. This is certainly a time to celebrate the progress of modern medicine and its ability to save the lives of millions of people. However, alongside this great news, the Center for Disease Control (CDC) has released new data on the rates of new HIV infections among adults and adolescents in the United States. This data reminds us that we still have a long way to go to eradicate this infection; many, many men and women are diagnosed with HIV every day.

Specifically, the CDC reports that southern states, like Texas, Florida, Louisiana, Alabama, Mississippi, North Carolina, South Carolina, and Georgia, have some of the highest rates of new HIV infection among adults and adolescents in the United States. The rates of diagnoses in these states is anywhere from 20.0 to 177.9 new HIV infections for every 100,000 people in the population. While some northern states, like New York and New Jersey, have comparable numbers, the greatest concentration of these astoundingly high rates can be found in the southern half of the United States. Something is clearly going on here.

Some analysts point to the lack of complete and factual sexual education in the disproportionately affected states. None of these southern states require comprehensive and accurate HIV/AIDS education. Two states, Florida and Texas, do not require any sexual education in public schools. While the CDC did not statistically test the relationship between comprehensive sex education and rates of new HIV infection, the link between the two seems pretty obvious: if students learn how to prevent the spread of the disease through safe sex practices, their risk of infection should decrease.

Why, then, are states still resistant to comprehensive sex education in their schools? We have moved past the days when the federal government espoused an abstinence-only agenda and tied education funds to states’ adherence to the “no sex outside of heterosexual marriage” motto. Since President Obama has entered office, an equal amount of funds for comprehensive sex education that teaches about safe sex practices, including abstinence, and about sexualities other than heterosexuality is available for states wishing to educate their students. Yet, some states, like Florida and Texas, do not take advantage of this funding.

Sociologically, we know that a fear of adolescent sexuality underlies many of the concerns about sexual education in public schools. In my first Sociology Lens post back in 2012, I described some of these fears by drawing on Jessica Field’s Sociology Compass article, Sexuality Education in the United States: Shared Cultural Ideas Across the Political Divide. In this article, Fields insightfully points out that regardless of political position on the issue of sex education, most people are motivated by the desire to regulate an out-of-control or dangerous adolescent sexuality. Fields’ argument continues to be relevant today; the new statistics on rates of HIV infection seem to be an unfortunate consequence of these publicfears.

While I am very optimistic about the health of the Mississippi baby, I am hesitant to say that this medical progress is enough. Can the same procedure be used to cure older individuals infected with HIV? Will the procedure be widely available at a reasonable rate? In the absence of these answers, we need to remember that one of the ways to eradicate HIV is to spread knowledge about safe sex practices so that new infections decrease. In addition to new medicine, we need to continue to raise awareness about safe sex and disease prevention through publically funded education.

Kirby, Douglas B, B.A. Laris, and Lori A Rolleri. 2007. “Sex and HIV Education Programs: Their Impact on Sexual Behaviors of Young People throughout the World.” Journal of Adolescent Health 40: 206-217.