Disembodied Racism and the Search for Racist Intent: The Trayvon Martin Case 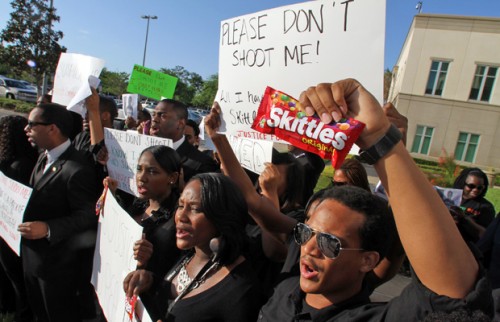 The Trayvon Martin case has become a national media event complete with competing individual evaluations, competing definitions of racism and competing blame narratives.  In these “racial events,” Americans propensity for individualistic analysis coalesces with America’s racialized culture in order to produce a mix of individual evaluations and sweeping claims about racial groups and the institutional privileges and disadvantages of different racial groups.  In my experience, this process reinforces many of the flawed ideas about race that sociologists regularly debunk and challenge.

Americans disparage racism because of its ultimate impact on individuals, but too often imagine that free and unencumbered choices of individuals are the sole source of racism.  Americans are likely to view racism as solely individual acts of bad or ignorant individuals (Zamudio and Rios 2006, 485).  In this case, a great deal of speculation has centered around whether or not the shooter uttered a racial slur on the 911 call.  Indeed, the shooter may have been motivated by a strong belief in racial stereotypes about blacks and negative affect towards blacks.  However, such individual level analyses promises to yield definitive answers of guilt or innocence that ignore or dismiss the role of culture and structure and reduce racism to “isolated incidents” (Bush 2004, 72) or create a search for a blameworthy racist in order to confirm the existence of racism (Ford 2008).

The risk in these cases is that we deny the systemic nature of racism.  In many ways, media discourse turns Bonilla-Silva’s (2003) reference to ‘racism without racists’ (used to describe how a racialized social system may exist without individual-level hatred of minority groups) on its head by positing that we have races, racism, and racists but no racial system.  This formulation is not simply the result of conservative politics and its outsized influence on media.  Even those discourses associated with liberalism, such as multiculturalism and diversity, frequently ignore systemic racial inequality (Michaels 2006; Bell and Hartmann 2007) focusing on etiquette rather than equality.

Most Americans vociferously deny that they are racist, even those who use and believe racial stereotypes (Myers 2005, 105) or engage in behaviors formerly labeled racism (Johnson et al. 2000, 103).  As Brown et al. (2005) notes, “Today, many white Americans are concerned only with whether they are, individually, guilty of something called racism (4).  Accusation of racism will likely provoke defensive reactions as they often seem directed at individual racists, rather than racist behavior, ideas, practices, structures, or policies.  Under such a construction, if there is white racism or just white privilege then a critical mass of whites must be racists.

As researchers have noted racism (rather than manslaughter or murder) is not reducible to individual intent.  Whether or not someone endorses racial stereotypes, they may still come under their influence.  We notice the race of strangers because we grew up in a society where race (and its physical markers) are significant, skin color provides clues (or we have been socialized to believe that skin color provides clues) about whether a person is, for example, dangerous or not.  Racial stereotypes often influence our judgments and behaviors indirectly by coloring (pun intended) ambiguous information (Pager and Quillian 2005) like walking around a neighborhood looking at houses.

Some meaningful discussion of racism will peak through here and there as the media coverage, but any cursory glance at internet comments around the story will reveal myriad attempts to define the larger social issues using the case to make sweeping generalizations about who or what is to blame for racism in America.  These debates often center on where the floating accusation of racism produced by the controversy belongs.

Berard (2008) urges academics not to ignore the social psychology of institutional racism.  He laments that too many academics “treat institutional racism in terms of the negative effects of institutions on minorities, neglecting, or explicitly dismissing the social-psychological questions about the intentions, the beliefs, and the concerns of those individuals who do the work of the institutions in question and who formulate policies and priorities in these institutions” (737).  I have heeded that call here.  Indeed, several social-psychological questions emerge from this case.  However, a single case is not evidence of any claim.  For example, a research study could examine what role race played in passing Florida’s self-defense laws, or in gun ownership in general.  But, if we find a legislator that sponsored the Florida law sent out a racist email we cannot then say self-defense laws are motivated by racist attitudes.