Going Out of My Mind in Jandiayacu 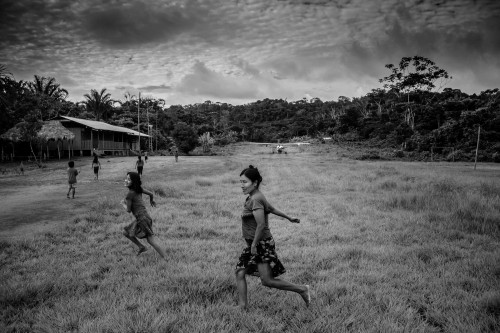 This is a photo I took in July, 2014, during my fieldwork in Jandiayacu. Jandiayacu is a Sapara community in the Amazonian region of Ecuador. It is accessible only by plane or a difficult journey on foot and by canoe, which takes several days.  (click for full size image)

So often we talk about being rational, making decisions based on established facts and existing knowledge, as if it is, and should be, the aim of all people at all times. Ways of being or knowing that sit outside of accepted knowledge can open a person up to being dismissed, discredited or ridiculed, particularly in the academic world. Anybody who knows me knows that I am a somewhat methodical and ‘rational’ person (most of the time). I love questions and puzzles and finding answers, and I struggle with things being disorganised, chaotic or inefficient. This is probably why I have found beginning my research with the Sapara nation, an Indigenous people here in Ecuador, so difficult.

The first time I visited the Sapara community of Jandiayacu (seven houses, deep in the Amazon jungle where an extended family of fewer than fifty people live) I arrived with a plan in mind. I had three days to conduct a workshop with the community, asking questions about how men and women in Jandiayacu experience climate change differently. But things didn’t go quite as I had hoped.

The first day was spent drinking chicha, an alcoholic drink that is made by the women in the community. They chew yuca (manioc), spit it into a carved wooden trough and then leave it to ferment in large ceramic pots for several days. It is typically offered to arriving families and guests and is an important part of the Sapara culture. Of course, as time passed the mood became more and more festive and, in the end, day one of the workshop was a write off.

The second day was a little more ‘productive’. We managed to work through some of the tasks outlined in the methodology that I had been given by the organisation I have been working with, but it felt awkward and forced, and there were constant distractions. Children, chickens, cats, dogs and monkeys running in and out, chicha being served all day, stopping for lunch (two hours), visitors arriving from a nearby community (more chicha) and the men of the group suddenly leaving to go fishing. The afternoon was hot and humid, and everyone was tired so we finished early and I hoped to get a little more done the next morning before the plane arrived to fly me back to the city.

I woke up to rain. The kind of rain only the rainforest (they call it that for a reason!) can produce. I knew this didn’t bode well for the workshop and, sure enough, there were more important things to do. The small grass and mud airstrip, the only way out of Jandiayacu (other than by canoe and hiking, which takes several days), was waterlogged. So, in place of the workshop, the morning was taken up by a minga. Mingas are community work parties where everyone gets together to do jobs that are too big for one person or a household. The backbreaking task at hand was to drain the airstrip, which involved digging trenches in the heavy clay earth along its entire length. I left the community later that day (thanks to everyone’s hard work digging the trenches) and, though I had had a great experience, I felt frustrated that I had not left with the answers to the questions I had been set. Moreover, I came away feeling as though I was more a part of the ‘problem’ than the solution.

The problem I am referring to is colonialism, and particularly colonialism in research methodology. In academia, many researchers still value the knowledge they already have and the methods used in their discipline more than they value the  knowledge and ways of being of the people they ‘study’. Also, Governments, Intergovernmental Organisations and NGOs still try to get the information they want or need from indigenous communities in ways that give western forms of knowledge supremacy, and they try do so as quickly and as cheaply as possible. Rarely does anyone ask what or whom this type of research is really for. Only on the bus back to Quito did it dawn on me that perhaps I was part of this too. I had arrived in Jandiayacu with set questions, set methods and a set timescale within which I was expected to extract ‘useful’ information for the organisation I was working for. Many people, myself included, seldom stop to think about the ongoing process of colonialism, and it is easy to forget that we (researchers) can be a significant part of it. The fact that there is even a field of study called ‘post-colonialism’ raises an important question. As Aboriginal activist and poet, Bobbi Sykes, asked ‘What? Post-colonialism? Have they left?’ (Smith, 1999, p. 24). Well, no, we still haven’t.

Once I was back in Quito, a friend (Julianne Hazlewood) recommended a recent article by Juanita Sundberg called ‘Decolonizing Post-Humanist Geographies’, which articulated many of my concerns. One phrase that hit home for me was ‘learning about the colonist who lurks within’. This is an unnerving but ultimately essential part of conducting research with indigenous peoples (or with any marginalised people). It requires the researcher to reflect critically on one’s own ontological and epistemological assumptions, relinquish control and unlearn much of what we have been taught. A key part of this is what Johannes Fabian calls ‘going out of our minds’, ‘leaving one’s comfortable psychological, political, and discursive place’. Sundberg suggests a method of doing so, described by Gayatri Spivak as ‘homework’, i.e. the process of reflecting on ones own position and privilege, particularly the ‘privilege of sanctioned ignorance that allows the perpetuation of silence about ongoing colonial violence’.

Last week I returned to Jandiayacu for five days. I went without set questions, without a specific methodology and without a plan. I spent time with people, I spoke with them and listened to them, and I think I began to build some relationships in the community. This is a crucial part of fieldwork, which is, after all, a social activity. As Laura Rival (2014, p. 224) notes, any coproduction of knowledge requires acceptance, co-operation, and trust, which all rests upon building rapport. I came away feeling as though I understood the questions I have been asking a little better than I did before, though I didn’t leave with any answers. I still struggled with how unpredictable and disorganised (from my perspective) Jandiayacu can be, and I had moments where I felt like I wasn’t being productive. I also still found myself listening to stories questioning how ‘true’ they were, rather than trying to understand what they meant to the people who were telling them. Nonetheless, I have taken some steps toward understanding the importance of ‘going out of my mind’. I have begun to see how doing so can help me to listen to, and at least try to comprehend, how people perceive their own lives. Perhaps, for me, acknowledging and respecting distinct ways of being and knowing may be a more important goal than being rational, efficient and objective.

That said, I still have a lot of ‘homework’ to do.

*This article draws on the following resources, particularly Smith (1999) and Sundberg (2014).

Fabian, J. (2000). Out of Our Minds: Reason and Madness in the Exploration of Central Africa. London: University of California Press.

Hazlewood, J. (2012). CO2lonialism and the “Unintended Consequences” of Commoditizing Climate Change: Geographies of Hope Amid a Sea of Oil Palms in the Northwest Ecuadorian Pacific Region. Journal of Sustainable Forestry, 31(1-2). 120-153.