The ‘public’ and the ‘private’ in the shaping of markets 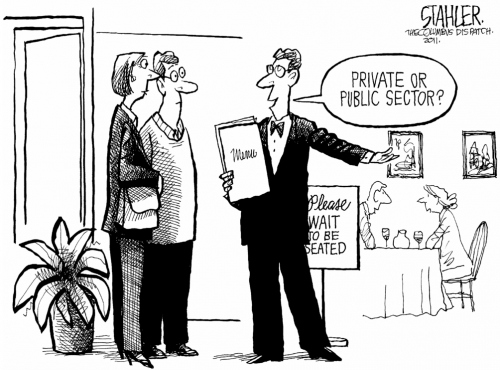 A ‘stupid cartoon image’ of public/private polarisation… via: http://www.freeduh.com/2011/03/08/the-new-segregation-private-or-public-section/

A couple of years ago, in a meeting hall adjacent to the Houses of Parliament, I sat in the audience while fund managers spoke alongside officials from the UK’s Department for International Development (DFID) and representatives of the Private Infrastructure Development Group (PIDG), an organisation funded by DFID and other donors with a mandate to “encourage private infrastructure investment in developing countries.” (PIDG was praised by DFID in their 2013 Multilateral Aid Review for “catalysing private investment in infrastructure,” but was subsequently hauled over the coals in Parliament for posing “risks to taxpayers’ money” with its “wasteful travel policies and poor financial management”.) At that meeting, one of the fund managers in attendance challenged a presenter who had spoken about the importance of government involvement when building key energy and power infrastructure: “government in the nicest sense spends money and the private sector generates wealth, and it’s not sustainable with only government involvement.”

Now while the second half of that sentence may contain some truth (although precisely what is meant by ‘sustainable’ in this instance is unclear), the first is highly problematic. And yet that notion – that the ‘private sector generates wealth while the public sector spends it’ – is near ubiquitous in contemporary policy discourse, as pervasive as it is stultifying and specious. It was, however, subjected to a sustained attack by Mariana Mazzucato in her much-discussed The Entrepreneurial State: Debunking Public vs. Private Sector Myths. Here Mazzucato traces out the role public institutions have played in enabling and funding high-profile, profitable innovations (including pretty much every component of the iPhone – see this review at Rethinking Economics). But as Mazzucato – a member of the Labour Party’s Economic Advisory Committee – argued in her recent public lecture on ‘Economic Policy: From Market Fixing to Market Making and Creating’, there simply isn’t an available language for talking about the role that the public sector plays in shaping and creating markets. There is no ready vocabulary available with which to discuss the many “mission-oriented” public sector interventions in innovation, entrepreneurship and product development that are discussed in The Entrepreneurial State; no public discourse which goes beyond viewing the public sector’s role as one of ‘fixing’ failing markets, tinkering around the edges, or just plain getting out of the way so the private sector can function ‘freely’.

Mazzucato takes her lead from J.M. Keynes’ essay on ‘The end of laissez-faire’ which touches on the importance of the state making “those decisions which are made by no one if the State does not make them.” For Keynes (and perhaps also Mazzucato), “The important thing for government is not to do those things which individuals are doing already, and to do them a little better or a little worse; but to do those things which at present are not done at all.” And yet, debate over economic and industrial policy in the UK often seems to descend into vacuous posturing over who is more ‘anti-business’ or ‘pro-business’; the notion that the public sector has no place in innovation and entrepreneurship always lurks in the background, and the idea that the public sector can be good for innovation and ‘wealth creation’ is usually absent. So where does this “crisis of imagination of the public sector,” as Mazzucato calls it, come from, and where might we find a template for a new language which allows us to talk about the public sector’s role in shaping and creating markets?

One recurring reference point in contemporary discussions about the shortcomings of the state comes from the ‘public choice theory’ associated with economists like James Buchanan and (often to his frustration) Vincent Ostrom, who highlighted the failings, inefficiencies and cronyism typical of many large state bureaucracies. Ostrom took an interest in initiatives like the 1954 Lakewood Plan, which introduced to Los Angeles the idea that public sector organisations could contract ‘units’ of public services (whether water provision or policing) from separate service-providing agencies, and which seemed to offer not only more efficiency but a more ‘democratic’ system of public good provision. Handy vocabularies for (often fairly) critiquing inefficient, lumbering or corrupt state institutions abound, but they are often deployed without critical reflection on whether public institutions fail because they are public – nor are private sector organisations readily scrutinised according to the same criteria.

This, perhaps, is where Mazzucato’s work is particularly potent. Firstly, in The Entrepreneurial State she provides evidence that contrary to the ‘private sector creates wealth, public sector spends it’ narrative, public sector agencies frequently foster and enable innovation, actively “picking winners” much as venture capitalists might. Secondly, writing in Industrial and Corporate Change, Mazzucato has argued that private sector finance quite often stifles innovation, a possibility that is not granted by the polarising discourse of public-sector-equals-sluggish-and-burdensome, private-sector-equals-innovative. Mazzucato points to work by Andrea Mina and colleagues which shows that the most innovative firms in the UK and US struggle the most to gain access to private sector finance. She also highlights work by Matthieu Montalban and Mustafa Erdem Sakinç on the turn away from innovation among pharmaceutical firms keen to maximize ‘shareholder value’. The third part of Mazzucato’s approach to challenging the ‘private wealth creators’ vs. ‘public wealth destroyers’ narrative is an explicit focus on shareholder value, ‘impatient’ capital, and the recent turn to share buybacks. William Lazonick has, for instance, shown that between 2003-2012 the companies making up the S&P 500 spent 54% of their earnings to buy back their own stock (driving up the value of executive stock options, and making it possible to report higher stock prices, even if momentarily), and a further 37% on dividends to shareholders. This leaves very little indeed left over to invest in innovation. Hence Mazzucato argues that ‘patient capital’ (often provided by public agencies) will be essential for fostering innovation and creating wealth (though as work by political economists like Samuel Knafo and Sahil Dutta shows, the kind of ‘financialization’ and pursuit of ‘shareholder value’ that Mazzucato sees as stifling innovation is as much a problem of managerial changes as the ‘impatience’ of financiers).

So public sector agencies often enable innovation and shape or make markets, private financiers may fail to support innovation, and contemporary corporate management seems to prioritize wealth extraction rather than investment in ‘wealth creating’ innovation… And still, politicians across the political spectrum in the UK fall over each other to declare that they are ‘pro-business’, with very little nuance. There simply does not seem to be a language in which to articulate Mazzucato’s concerns and talk equitably about the relative contributions that public and private sector agencies make to innovation and ‘wealth creation’ (nor to talk symmetrically about the inefficiencies and cronyism that can be found in both sectors) without being accused of naively reversing the public-private polarity, of being an outdated, statist throwback.

Perhaps, though, there are perspectives and vocabularies at work in the sociology of markets that could be brought to bear on Mazzucato’s “crisis of imagination of the public sector”: for some time now, sociologists influenced by Michel Callon and Donald MacKenzie, among others, have explored ‘marketization’, working on the understanding that markets must always be made, assembled by a diverse array of agencies and well-equipped experts. MacKenzie has rejected the “‘pro-market’/’anti-market’ dichotomy,” asking that sociologists explore all markets as politically achieved arrangements, and has called for a “detailed politics of market design.” For the most part, the social study of markets has avoided confronting the kind of policy issues Mazzucato is concerned with head on, but this may be set to change: the next Interdisciplinary Market Studies Workshop (June 8-10th 2016 in St. Andrews, Scotland – call for abstracts closes January 31st) is set to grapple with the question: “How does market design interact with the construction of the institutions and procedures of contemporary political democracy?…how would we do it differently?” And, we might ask, how could the social studies of markets contribute to challenging what Mazzucato describes as the “stupid cartoon image” of the polarised private and public sectors, and carefully trace out the political and economic arrangements that facilitate innovation and enable ‘wealth creation’?