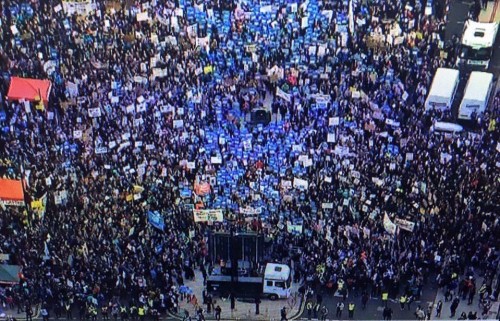 Yesterday, for only the second time since 1975 (the first was this January), junior doctors in England went on a 24-hour strike. The strike action was the culmination of a series of disputes and breakdowns in negotiations that have been ongoing since late 2014, when the Review Body on Doctors’ and Dentists’ Remuneration recommended a new contract. The contract threatens to have a significant impact on doctors’ pay, and on the extent to which they are protected from working excessively (and so dangerously) long shifts. Media coverage in the run-up to the strike was, as might be expected, rather polarised, with pro– and anti-government publications making their positions clear. Most of the coverage, including from the BBC, focused on the government’s offer of an 11% pay rise towards the end of last year, and the British Medical Association’s counter that the pay ‘rise’ will be offset by a reduction in pay for weekends and anti-social hours.

A now-controversial paper published in the British Medical Journal last September, and which hinted at excess mortality levels on weekends, has also received considerable (though largely uncritical) attention in the press. This followed the Health Secretary enlisting the paper’s claims as justification for reducing junior doctor’s pay on weekends while expanding the National Health Service into one that operates fully, seven days a week. The argument is that paying overtime on weekends gives “hospitals a disincentive to roster as many doctors as they need at weekends, and that leads to those 11,000 excessive [sic] deaths…According to an independent study conducted by [sic] The BMJ, there are 11,000 excess deaths because we do not staff our hospitals properly at weekends.” In fact, the study in question does not make the claim that there are excess deaths because of low staffing; in connecting their mortality findings to the question of weekend cover, the authors simply note that “There is evidence that junior hospital doctors feel clinically exposed during the weekend and that hospital chief executives are concerned about levels of weekend cover.”

What has been largely overlooked in the public debate and press coverage are the changes to junior doctors’ contracts beyond the extension of ‘normal’ working hours to 7am-10pm on weekdays, and 7am-7pm on Saturdays. Accompanying changes would mean potentially less opportunity for breaks on shift (likely to impact negatively on care standards and safety), and the removal of the financial penalties for hospital employers who plan or demand excessively long (and unsafe) shifts. The new contracts would also potentially penalise the acquisition of skills, reducing the pay of doctors who re-specialise after having part-specialised elsewhere (or who undertake research or professional training degrees and then return to work).

But, perhaps surprisingly, during an era in which industrial action is not generally well received by members of the public situated outside the union in question, YouGov polls have suggested majority support for the striking doctors. Support for the strike is no doubt partially explained by the high social status held by the medical profession. But the very fact that this was a strike by a professional body suggests that it cannot be understood in conventional Marxist terms, as a conflict between ‘labour’ and ‘capital’ over respective shares of the spoils. Indeed, as a number of sociologists – including Scott Lash and John Urry, and more recently Mike Savage – have argued, the rise of the financial services sector has troubled the idea of a neat distinction between ‘working’, ‘middle’ and ‘capitalist’ classes. There is now a greater wealth divide between the upper and lower echelons of the managerial class than there is between the managerial class as a whole, and what are now termed the ‘intermediate occupations’.

Instead, the junior doctors’ strike might be understood as a symptom of a set of wider social and economic changes. Chief among these is the ascendancy of managerial professionals, whose authority, wealth and (often) status now trumps those of the older ‘professions’ like medicine. At the top end, these managerial professionals may find themselves benefiting handsomely from public goods and from austerity regimes, where, as Laura Bear observes, “public infrastructures become an intensified source of accumulation for the private sector.” It was, though, the medical professional that formed the template for much of the work that has been carried out in the ‘sociology of the professions’. Eliot Freidson,for instance, treated doctors as the quintessential profession in his 1970 classic, Profession of Medicine. Rejecting definitions that focused on skill, collegial control and public interest alone, he viewed the professions (in Steven Brint’s words) as “above all a phenomenon of labour market organization.” The professions were those occupations able to create exclusive, insulated pockets within the ‘labour market’, by monopolizing education, training and credentials.

Not dissimilarly, Harold Perkin’s 1989 The Rise of Professional Society posited professional society as the successor to earlier class-based societies (whether industrial class-based society organised around ownership of the means of production, or feudal society based on the absolute right to property). Crucially, Perkin argued, the “professional hierarchies cut across the horizontal solidarities of class in the warp and weft of the social fabric”; professional society is structured around vertical career hierarchies, not the horizontal connections of class conflict. Meanwhile, the “struggle between the public and private sector professions is the master conflict of professional society.” This public/private rift among the professionals, Perkin argued, was acute in the development of Britain’s welfare state, where medics (eventually) became the staunchest defenders of the National Heal Service, and the Law Society defended legal aid as “an integral part of the British system of justice” – long before last year’s protests by barristers and solicitors over cuts to legal aid.

But the public/private split that Perkin introduced does not quite capture what has been happening recently as certain professionals – a select group of management consultants, and medical-professionals-turned-management-consultants – have managed to make public services work better for themselves than they do for public sector medical professionals, or indeed for the wider public. In the debate about whether junior doctors’ pay must be cut (that it is a cut is often denied in the media, but ‘standard time’ is extended by thirty hours a week under the current contract proposal, effectively cutting overtime or ‘anti-social hours’ pay), little attention is given to the other areas in which the NHS has been haemorrhaging money to non-medical professionals. Take the Peterborough Hospital, when it was struggling to pay the astonishing interest rates on its Private Finance Initiative (such schemes frequently transfer far more than the original capital costs of building a school or hospital to the company contracted to ‘maintain’ them). These payments came to a crippling 20% of the Trust’s budget in 2011/12, and so a Pricewaterhouse Coopers ‘turnaround team’ was sent in. This was after PwC had initially advised on the disastrous Private Finance Initiative, back in 2007. And, after former Health Secretary Andrew Lansley pledged to ‘slash’ management consultancy spending (mamagement consultants are often paid several weeks’ worth of a senior doctor’s salary for a single day’s work), Freedom of Information requests reported upon in the British Medical Journal in 2014 show a doubling of NHS consultancy spending between 2010-14 (from £313m to £640m).

Lansley later went to work as a consultant for pharmaceutical manufacturer Roche, a beneficiary of the cancer drug funding programme established by Lansley during his time as Secretary. He defended his appointment on the grounds that all of his consultancy roles were ‘notified to the ACOBA and therefore no conflict of interest arises.’ But, we might wish to consider this claim in light of evidence given on ACOBA, the Advisory Committee on Business Appointments, to the Public Administration Select Committee in 2012. In giving their evidence, a group of sociologists and transparency campaigners noted that there is only one known case of an MP being told not to take a job on the grounds of a conflict of interest. The expert evidence also contained the observation that ACOBA is not up to the OECD’s guidelines on ‘Post-Public Employment’, which demands that conflicts of interest be “properly identified and resolved or managed” -rather than rendered null and void by simply making a declaration of conflicted appointments, as Lansley would seem to have it.

It is by no means difficult to find further examples of vast transfers of wealth from the NHS to management consultants (in particular, McKinsey and KPMG). In fact, even the results of the BMJ paper that the Health Secretary has cited so frequently, on excess weekend mortality (and which has been much challenged in replies to the BMJ), appear to have been leaked to Deloitte, who then briefed the Health Secretary, up to three months before publication. So rather than seeing the junior doctor’s strike as merely a pay dispute that concerns one professional group, the strike should perhaps be viewed as part of a wider conflict between the subset of management professionals who are able to capture value from public infrastructure on the one hand, and public sector professionals (and the broader public) who find themselves paying for that captured value, on the other.

The junior doctors are better organised and belong to a professional body with higher status than, say, casualised university lecturers, but many of the issues faced are similar. Like casualised higher education staff, junior doctors are told their demands are too many, and that anyway, ‘there is no money’ – meanwhile, managerial roles and salaries expand at a frankly alarming rate and often at public expense. In addition, as Youssef El-Gingihy documents in his recent How to dismantle the NHS in 10 easy steps, what started as a project to ostensibly introduce efficiency into the NHS (the separation of ‘service providers’ and ‘service purchasers’, a la public choice theory), has now culminated in Section 75 of the Health and Social Care Bill. This enables private healthcare providers to outbid (undercut) NHS tenders, sometimes leading to staff redundancies and poor performance. Care giving does not often benefit from a race to the bottom.

Perkin’s model of professional society might therefore need updating to take account of the new managerial class. The biggest split among the professionals is no longer between those in the public and private sectors; it is between those positioned to render public infrastructure a source of accumulation for the private sector, and those who stand to benefit from retaining their status as professionals (albeit one based on cornering a section of the labour market) by providing a publically funded, public service.