The Crimean War of Signatures

On March 18, Vladimir Putin signs a treaty with his Crimean counterpart Prime Minister Sergei Aksyonov to welcome Crimea into the Russian Federation after the referendum on March 16. 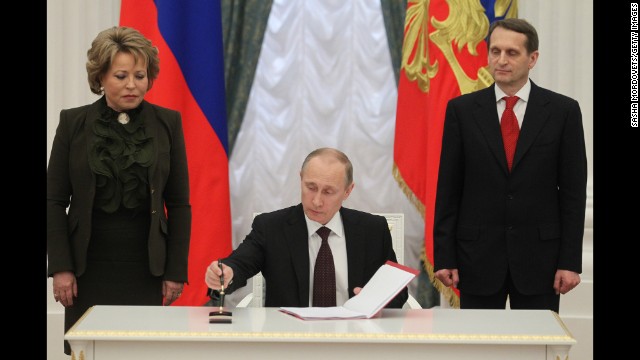 On March 21, Vladimir Putin signs the final decree completing the annexation of Crimea observed by Upper House and State Duma speaker in Moscow. 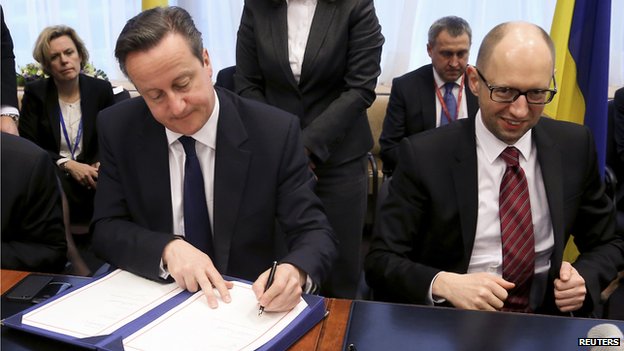 On the same day, Arseniy Yatsenyuk, Ukraine’s Prime Minister, as well as David Cameron were among those signing the EU association agreement in Brussels.

This chain of events constitutes what has recently been called the ‘Crimean Crisis’. Some might claim that there was more to it, but arguably these events capture the most important aspects of the last couple of days. One could be upset by the way in which politicians nowadays deal with crisis (‘Let’s have a grand display of treaty-signing while we send the soldiers’) or how the media reports on the signature-mania (a montage of signing rituals – Putin in Crimea, Putin in the Duma, Putin in the Kreml), but given that I am not an expert on politics, and surely not on Eastern Europe, I want to briefly reflect on what the recent events made me realise in more general terms.

The act of signing as performed in recent days by many statesmen is nothing new as such. Signing has been part and parcel of politics since the beginning of writing. Signing declarations of war, letters of intent, peace treaties, conventions, accords, agreements, declarations of independence as well as the daily business of simple law making drove, and still drives, history. My German history book was built around these events; history was narrated from signature to signature. These signings are not the same as the random signatures authorising credit card transactions for daily shopping, however. They are metaphorical and representational – and often, indeed, disguising.

That they are special is already apparent in their materiality and exaggerated theatricality. Look at the first picture above: Putin and three high officials from the Crimean government are each accompanied by a personal helper. One by one, the document – heavy, off-white paper – is put in front of the signee and a fountain pen – stretching its pointy head high up in the air – is used to calligraphically express agreement. Not only the scene, even the signature itself is often enhanced: enlarged, zestful and bold. But does the signing – enhanced or otherwise – really mean anything? In the end, is it just the essence of politics for the politician: enlarged and theatrical?

Signing is more than a representative gesture: it legitimises, puts into law what before was mere words – exchanged between parties. The spoken word doesn’t really count on the international stage. That’s why the U.S. representative to the UN, Samantha Power, and her Russian counterpart, Vitaly Churkin, were able to bark at each other in the security council the other day; it was merely chatter. Only writing, and actually only the signature of elected representatives through the act of writing, ‘transforms’ the words of the document into reality. It makes Crimea part of the Russian Federation.

Is this true, though? Which laws count: international law, which the US claims cannot acknowledge the annexation of Crimea, or Russian law, as confirmed by recent signatures? Was Russia actually legally able to sign Crimea into its territory? Who wins the war of signatures is not easily answerable in this jungle of competing claims. I was struck by this apparently superficial layer of peaceful signatures dominating the media landscape and public perception. I thought it was quintessential for the crisis of political representation: all these politicians signing clean, white documents while soldiers on the ground march up and down the borders – how ironic. I eventually realised in a thoughtful U-turn, however, how necessary this veil is.

All the signatures, all this pompous staging for the media and for the public, really only cover up the diplomatic work going on behind the scenes. Diplomacy often has these two realms which are occupied by quite distinct people: invisible diplomats on the one hand and cocksure politicians on the other. The invisible web of endless talks, discussions, phone calls, meetings, and compromises was one of the mechanisms that prevented the Cold War from becoming hot. Just think back to the wonderful scenes in Kubrick’s Dr. Strangelove where President Merkin Muffley calls Soviet Premier Dimitri Kisov via the red ‘hot line’ to resolve a nuclear catastrophe:

Muffley: Hello Dimitri, I can’t hear you too well. Can you turn down the music a bit? … Well, it’s good that you are fine and I am fine. I agree with you, it’s great to be fine. Well, you know, Dimitri, we have always talked about the possibility of something going wrong with the bomb. … Let me finish, Dimitri. Listen, how do you think I feel about it? … Of course, I like to speak to you. Of course, I like to say hello. … I am just calling up because something terrible has happened. Of course it’s a friendly call. … We have to help you destroy them. … Alright, yes, listen. Who should we call? … You happen to have the phone number on you, Dimitri?

Dimitri and Merkin try their best to prevent the fatal airstrike and all of this stretching and straddling takes place on the backstage of diplomatic, secret talks. Of course, this is only fiction but various of the recent revelations from sources such as Wikileaks (the ones that didnt make it into the press) have a similar tone – both friendly and hostile. So where do the Crimean signatures now fit into all this?

What the media portray is only one layer of superficial, theatrical signing. This layer is made very meaningful in all its rituality and pompousness, but really the gravity of signing a heavy sheet of bone-coloured paper with royal blue ink is very often negligible. The real deal is made on the backstage of diplomacy where the stage is set for the words on the document to be put into action. I am not sure whether it is thus a good idea to ‘leak’ too much information from this hidden stage or whether secrecy is exactly what allows this complicated and delicate mechanism to work. But this is another argument. For now, Let’s hope that this time the backstage can again prevent a not-even-Cold War to become hot.