The School-to-Prison Pipeline and the Minority Educational Gap 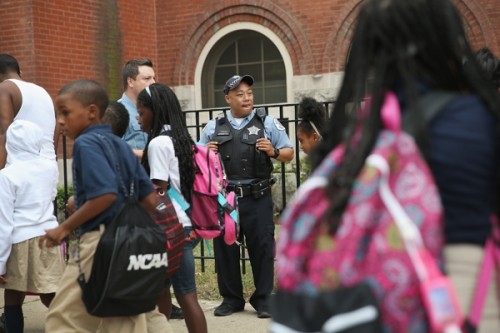 In a recent Sociology Lens post, Markus Gerke detailed the problem associated with President Obama’s rhetoric of individual responsibility for increasing opportunities for Latino and Black men. One component to President Obama’s initiative is to increase educational opportunities for these populations and Gerke correctly notes that the focus on individual responsibility ignores the structural barriers that limit these populations. Research suggests that a major factor in the educational achievement gap is the presence of the school-to-prison pipeline and the punishment of minority students at greater rates than white students. A recent report by the U.S. Department of Education notes that 5 percent of white students in the United States are suspended compared to 16 percent of black students.  Furthermore, researchers have documented racial disparities in school punishment for over 40 years with African-Americans accounting for 34 percent of suspensions nationwide, despite making up only 17 percent of the population (Browne, 2003).

The school-to-prison pipeline regularly funnels students out of schools and into the juvenile justice system. Researchers indicate that school-to-prison pipeline developed over concerns about juvenile crime and the result of zero tolerance policies beginning with the Gun-Free Schools Act of 1994 (APA, 2008). The Gun-Free Schools Act mandated that all students caught with a gun on school property were automatically expelled. Over time schools began to expand mandatory expulsion policies to the possession of drugs or other serious crimes committed on school as well as off school property (Consella, 2003). While zero tolerance was first oriented towards specific violations, schools now suspend or expel students for disrupting the classroom, disrespecting teachers, possessing headache medicine, fighting, or tardiness. Punishments that exclude students from the classroom are now commonplace and research shows that suspensions are being used for trivial conduct such as disrespect and disruption (Browne, 2003). The increase in suspensions and expulsions are further exacerbated by the increasing involvement of the criminal justice system into school discipline.

In recent years, traditional school punishments are being enhanced by criminal justice involvement. Students are increasingly being suspended along with receiving citations or criminal penalties for their behaviors. Many of these violations are statutory in nature and would not be considered punishable if conducted by an adult (Consella, 2003). Despite the increasing use of zero-tolerance policies, little research evidence suggests that zero-tolerance policies reduce crime in schools (Henault, 2001). Research indicates that suspended youths have a high rate of recidivism for school suspensions; rather, it appears these penalties reinforce student behavior (Henault, 2001). The use of suspensions or criminal penalties for trivial penalties engenders senses of unfair treatment by students and the feeling that school officials are targeting certain students. The increasing criminalization of students by schools creates additional problems for students.

Students who are suspended, expelled, or charged with crimes while at school suffer many consequences beyond the criminal justice system (Henault, 2001). These students face embarrassment, shame, and stigma from being arrested in front of their classmates. Students also must catch-up in the classroom from missing time away from school, thus falling behind in their studies. Research indicates students who are disciplined are likely to have lower test scores and have higher drop-out rates (Skiba, 2004). Students who do return to school are stigmatized and closely monitored by school officials. As a result, many students become demoralized, quit school, and/or increase their deviant behavior. The presence of a juvenile record can also prevent students from getting jobs, getting into college, or joining the military affecting the student’s life outcomes long after he/she graduates from school (Skiba, 2004).

Research indicates the presence of an educational gap between minority and white students in the United States. These reports note that minority students already face many educational challenges including less experienced, underpaid, and even unqualified teachers. The addition of increased criminalization of minority students and the removal of these students from the classroom places them at a greater disadvantage. If President Obama is serious about decreasing the education gap for minority students, then he must address the way our schools punish youth. Some school districts have already taken steps to reduce the impact of the school-to-prison pipeline by developing programs that avoid the involvement of criminal justice officials. In my next post I will provide an overview of these programs and show how they not only decrease the number of disciplinary infractions in the schools but also increase educational achievement.